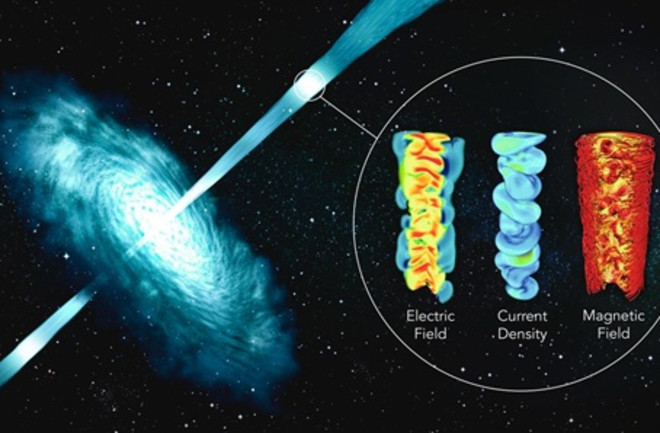 Spinning supermassive black holes often shoot out jets of plasma from their poles. When the magnetic fields in these jets get twisted and tangled, they generate an electric field capable of accelerating particles and creating cosmic rays. (Credit:Greg Stewart/SLAC National Accelerator Laboratory)

Cosmic rays are energetic particles moving at high speeds. Because it takes significant energy to create them, they often serve as cosmic messengers, revealing clues about the extreme environments that produce them — such as supermassive black holes. On Earth, scientists use accelerators to generate and study particles moving at high speeds, but nature needs no such apparatus. Now, researchers at the Department of Energy’s SLAC National Accelerator Laboratory have found a possible mechanism behind nature’s own particle accelerators: When the magnetic fields in the material around a supermassive black hole get tangled, they can generate conditions that send cosmic rays skipping off through the universe.

Supermassive black holes often spew jets of hot plasma from just outside their event horizon. (Plasma is a state of matter in which both ionized atoms that have lost their electrons and those lost electrons coexist.) In their work, published December 14 in Physical Review Letters, the research team created a miniature jet using the Mira supercomputer at the Argonne Leadership Computing Facility at Argonne National Laboratory. Their mini-jet contained only 550 billion particles, but based on its behavior, the team then scaled it up to real-world proportions and compare their simulation with astronomical observations.

Those simulations showed that as jets are launched from around the black hole, the magnetic fields — generated by the spinning black hole at the heart of it all — inside the jet become twisted and tangled. “We knew that these fields can become unstable,” said Paulo Alves, the paper’s lead author, in a press release. “But what exactly happens when the magnetic fields become distorted, and could this process explain how particles gain tremendous energy in these jets? That’s what we wanted to find out in our study.”

The team found that, indeed, the distorted magnetic fields could impart high energy to particles in the jet. The tangled magnetic field lines generate large electric fields inside the jet as they twist ever tighter. Particles inside the jet are then accelerated by the combination of the magnetic and electric fields, giving them enough energy, based on the team’s calculations, to allow protons to flee the jet as cosmic rays.

“Based on our simulations, we’re able to propose a new mechanism that can potentially explain how these cosmic particle accelerators work,” said SLAC staff scientist Frederico Fiúza, principal investigator of the study.

“This careful analysis identifies many surprising details of what happens under conditions thought to be present in distant jets, and may help explain some remarkable astrophysical observations,” added Roger Blandford, former director of the SLAC/Stanford University Kavli Institute for Particle Astrophysics and Cosmology, though he was not part of this study.

Based on these results, the team now plans to delve deeper into the workings of cosmic jets, looking even more closely at their behavior to see if their proposed mechanism holds up. The team also plans to conduct laboratory experiments to determine how the mechanism acts — at least in a lab on Earth