What’s With the Aversion to Lab-Grown Meat?

There are psychological reasons why some people may have an aversion to cultured meat. And as it becomes more popular, it’s important to know what they are. 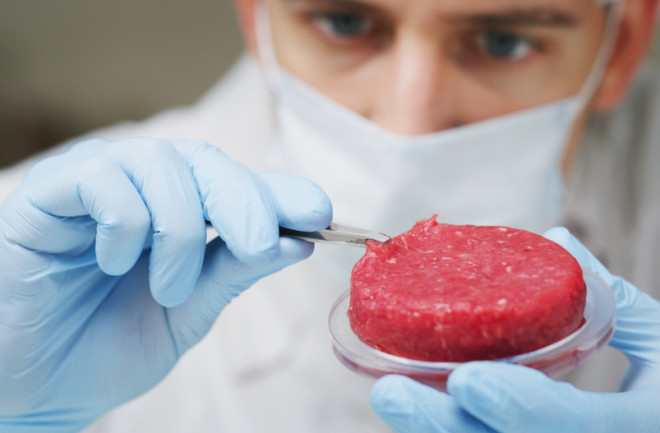 Scientist inside a lab, wearing lab gear, holds a dish with cultured meat inside. (Credit: Kitreel/Shutterstock)

In August 2013, Mark Post of Maastricht University unveiled to an events hall the world’s first kill-free beef patty. Through a laborious and bogglingly expensive process, Post and his team successfully grew real meat in a lab from a biopsy all the way up to an edible burger.

But the response from the public was mostly, “yuck.” At the time, cultured meat seemed to irk most on a fundamental level.

Today, while there is still some aversion to cultured meat, domestic support for this technology is steadily growing. A recent poll found that two thirds (67 percent) of Americans would be willing to try cultured meat grown in a lab setting. This increasing support comes at a time of considerable food and environmental insecurity, combined with rising global economic challenges, meaning that cheaper, more accessible and more environmentally friendly food sources are in dire need. So, why the aversion?

Paul Rozin is a professor at the University of Pennsylvania and has been described as one of the world's leading experts on disgust. Over the years, Rozin has worked to examine and understand the cultural, environmental and evolutionary roots of what grosses us out.

He describes our relationship with meat as turbulent. “We love it, and we are easily disgusted by it,” Rozin explains. “Cultured meat has to navigate that difficult boundary.”

In a 1987 paper, Rozin writes, “almost all objects that qualify as disgusting by our criteria are animals or parts of animals, animal body products, or objects that have had contact with any of the above.”

Our feelings of disgust are, in part, born from potential exposure to disease or contamination, risks that are often highest when consuming animal products. This makes the introduction of unfamiliar meat products a tougher sell than other novel food sources, such as plant-based alternatives.

In theory, cultured meat products are less susceptible to contamination than their traditional counterparts, due to their controlled methods of production. However, studies indicate that comparisons between the safety of cultured and traditional farming are not particularly useful, as proposed health risks from cultured meat are perceived as far less acceptable to people than identical risks from traditionally farmed meat.

According to Rozin, our increased standards for safety could be a result of believing that the technology is “unnatural” and therefore repulsive. Rozin argues however, “almost all food is unnatural, […] you can't even get things like natural tomatoes and natural corn.”

If we view cultured meat as “unnatural,” but view antibiotic-treated farmed animal products as perfectly normal, this may indicate we have more nuanced beliefs for technology.

A 2019 paper from Yale University polled the American public to better understand the psychological predictors of attitudes toward cultured meat.

Matti Wilks, University of Edinburgh psychology lecturer, made the distinction between surface attitudes — beliefs that people give to others as their motivations — and attitude roots — the subconscious base motivations that form our opinions. When asked about their views on cultured meat, many participants thought technology was “unnatural.” Wilks suggests that this is a surface attitude, and their underlying motivations are more complex. She explains, “it seems like people are calling something unnatural maybe when it feels bad, or disgusting or scary.”

Read more: What Is Cell Cultured Meat and When Can You Try It?

In the paper, Wilks examines three roots that could explain our attitudes towards cultured meat: conspiratorial ideation, our worldviews and our fears or phobias.

Conspiratorial ideation refers to a person's tendency to believe in sinister government conspiracies and public hoaxes. Our worldviews, or our cultural orientations, play a massive role in determining our beliefs and values. And the fear of new foods is the strongest and most consistent predictor of attitudes toward cultured meat. Specifically, the more participants had a general aversion to new taste and food experiences, the less willing they were to eat cultured meat or acknowledge its benefits.

Good Meat CEO, Josh Tetrick, argues that the most effective solution to getting people on board with cultured meat is a direct approach.

“It's just through the food. That is far and away the most effective way to normalize it,” says Tetrick.

The evidence supports this. Research on the fear of new foods suggest that simply tasting unfamiliar foods is one of the most efficient ways of overcoming a person's fears or anxieties towards them.

Good Meat aims to do this and is the first company in the world to gain regulatory approval to sell to the public. The company will distribute its cultured chicken products in Singapore since December of 2021.

In the U.S., the FDA approved the sale of cultured animal products to the American public in Nov. 2022, deeming that products grown in a bioreactor are safe for human consumption.

As less people have an aversion to cultured meat, we will see if this new technology can address the food challenges of today, as it hopes to accomplish.

It seems we won't have to wait much longer to find out.