What's the Universe Made Of? 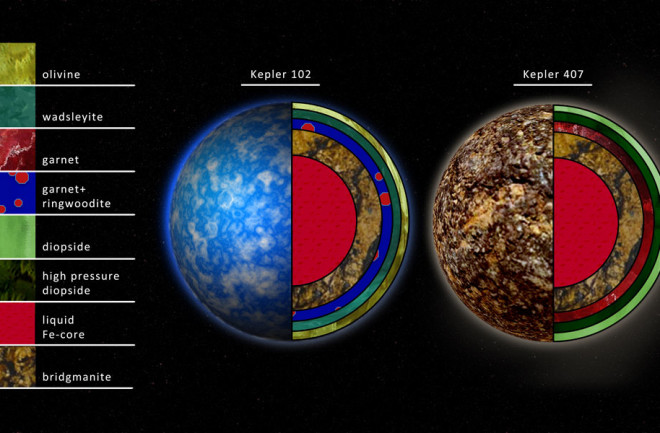 Minerals that are likely to occur at different depths of Kepler 102 and Kepler 407. (Credit: Robin Dienel, Carnegie DTM) How much of you lies among the stars? How are the elements that make up life distributed among stars and planets? As trippy as the questions seem, astronomers from the Sloan Digital Sky Survey (SDSS) announced today at the 229^th meeting of the American Astronomical Society that they knew the answers — or, at least, were starting to learn them. SDSS, “the energizer bunny of sky surveys,” according to spokesperson Karen Masters, is a massive data collection project that’s been going on for 17 fruitful years. By analyzing and breaking down a star’s light, astronomers can determine the elements within. Do that with enough stars, and you can start to map out the distribution of elements throughout our galaxy. That’s just what the APOGEE (Apache Point Observatory Galactic Evolution Experiment) project did, looking at more than 150,000 stars in the process, using infrared light to peer through the dust that blocks visible light waves. Of particular importance are the elements necessary for life, nicknamed CHNOPS for carbon, hydrogen, nitrogen, oxygen, phosphorus and sulfur. APOGEE found a definite pattern, with the greatest abundance of each of these lying closer to the Milky Way’s center. Since the stars there are typically older, it means more of life’s elements came to be in the inner part of the galaxy earlier than in the outer parts. Does this mean there’s a greater chance for life in the center, since it’s been possible for longer there? The presenter, Sten Hasselquist of New Mexico State University, said that he doesn’t want to speculate about what it means for life, “but it is very interesting.” As much as the reporters tried to get more out of him (“I don’t want you walking out of here writing that we found life!”), the farthest Hasselquist would go was, “The longer timescale is tantalizing.” One of the other presenters quipped, “There is a reason why they put the Star Wars capital toward the center of the galaxy,” presumably referring to the Republic/Imperial capital world of Coruscant.

But of course stars are only half the story for possible life; what about actual planets for it to live on? Astronomers have a few ways to figure out what individual planets are made of — making inferences from the world’s mass and size, trying to catch a glimpse of its atmosphere to break it down spectroscopically — but the most reliable method might just be by studying its host star. Johanna Teske of the Carnegie Institution for Science described a new study that plugs the SDSS’ latest observations of stars into a model that figures out what kind of planets would form around them. Since stars and their planets ultimately coalesce from the same clouds of gas and dust, it makes sense that a star’s makeup would shed light on the worlds it keeps in tow; while it would provide only a rough guess at a planet’s makeup, the model did reproduce Earth’s makeup well enough to give the researchers confidence. What does it matter what particular elements make up a world? In order to find a world with truly Earth-like conditions, and not just a similar mass and size, composition can make all the difference. Life as we know it formed on a geologically active world with plate tectonics and other features that helped make life possible; we don’t know exactly what it takes for life to arise and thrive, but since our only example is Earth, it makes sense to find as close an analog as possible. In particular, Teske shared the findings for the planet-having stars Kepler 102 and Kepler 407. (The model doesn’t aim to recreate any planet in particular, but rather what a typical planet around those individual stars might be made of.) Even though Kepler 407 is almost identical in mass to the sun, it would likely produce a stiffer planet with no tectonics. Kepler 102, despite being slightly dimmer than the sun, was made of the right enough stuff to make one of its planets more likely to be truly Earth-like. The goal, Teske said, is to use these models to help astronomers “hone in” on the best targets for next generation telescopes like the James Webb Space Telescope to study up close, the better to find life someday. But for now, just to be clear (and make Hasselquist happy), Earth remains the only world of its kind, and the only place to produce life. Perhaps, though, that’s just a matter of time.