What's the Deal With Pulsating Auroras? 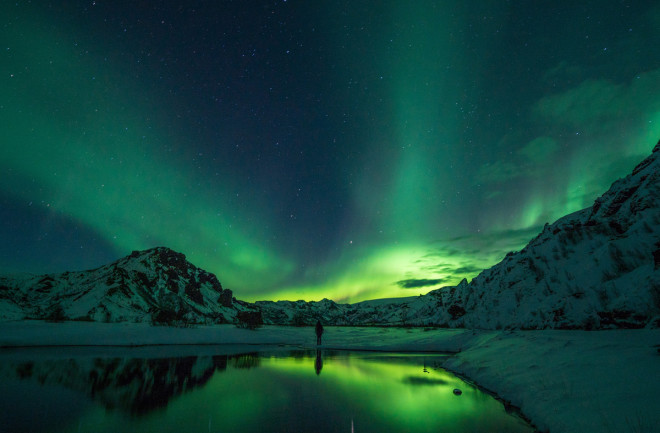 (Credit:Jonatan Pie/Unsplash) Auroras, known to many as the northern lights, are a beautiful and mysterious phenomenon. To the casual observer the streaks of colored light across the sky can seem miraculous and inexplicable. And one kind in particular, called a pulsating aurora, has indeed been mysterious to scientists, who have never been able to directly prove their hypothesis about how it’s formed. Now, armed with better technology, researchers from Japan say they’ve finally caught the aurora in the act.

When charged particles from the Sun, primarily electrons and protons, cross into the Earth’s magnetosphere, they emit photons — what kind depends on what elements are present — and the resulting light show is what we call an aurora. Most auroras appear as shimmering bands of color in the sky, snaking and intertwining in an intricate dance. But pulsating auroras appear as patches of color, dozens or even of hundreds of miles across, that fade in and out of appearance. Like other auroras, it was thought that electrons interacting with Earth’s magnetic field were responsible, but the mechanism had never been observed. Scientists’ theory hinged on a phenomenon called chorus waves — natural fluctuations in the Earth’s magnetosphere — that were corralling the electrons and creating the auroras. Electrons traveling along magnetic field lines occasionally pass through chorus waves, and that interaction puts them on a collision course with our ionosphere, a region above the Earth's surface filled with ions and where auroras appear. It wasn’t until 2016, when the Japan Aerospace Exploration Agency’s Arase satellite launched, that researchers actually had the tools to study these interactions. The satellite contains both an electron detector and the ability to listen in to chorus waves, meaning that all the researchers had to do was line the craft up with a magnetic field line that passed through the Earth’s surface and wait. A Dance of Plasma and Particles When an auroral substorm, a release of energy stored in the magnetosphere, hit, the researchers were able to make their key observations. With their new, more powerful instruments, they picked out the electrons re-directed by the chorus waves and matched them with observations of pulsating aurora from the ground. They published their findings Wednesday in Nature. It’s the first time such a direct observation had been made, and it confirmed that researchers had been right all along. Future studies will likely interrogate if the ionosphere has any effect on the final appearance of the aurora, perhaps by filtering the electrons somehow. The researchers hope to use sensors aboard the Arase satellite to explore other atmospheric phenomena related to the elusive field of particle physics. But if you’d prefer to preserve the mystery of cosmic light shows, we understand.