What Would the Sun Sound Like If We Could Hear It On Earth?

A thought experiment explores the awesome power of our star. 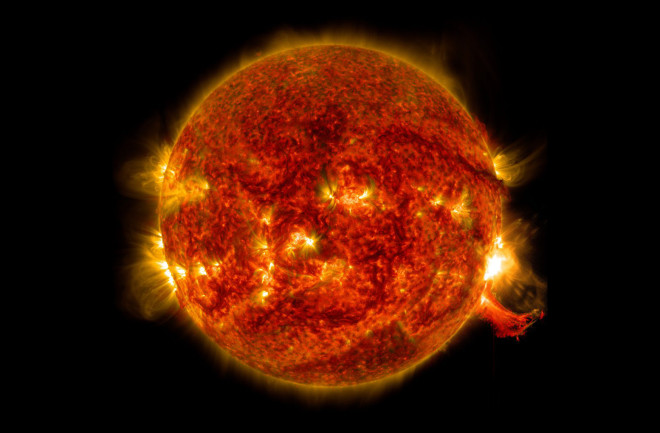 The sun's surface is a roiling soup of superheated plasma. If we could hear its motion as sound energy, the roar would be audible on Earth — 92 million miles away. (Credit: NASA/SDO)

It’s dawn. The sun crests the horizon, bringing with it the first flush of light and the arrival of a new day.

And, as always, the dull roar, once muted, returns in full force. A bawling cacophony permeates the air, insidious as daylight. Gone is the trill of birdsong, the gentle rush of wind. Indeed, it is a struggle even to talk.

So begins another day in a curious thought experiment: What if we could hear the sun?

In our world, the laws of physics preclude sound from moving through the vacuum of space. But let’s assume for a moment that sound can travel through space like it does through the atmosphere here on Earth.

In this world, the sun would no longer be a silent ball of fire hanging in the sky. Instead, it would be a perpetual white-noise machine, blaring with the intensity of a rock concert at all hours of the day.

“The sun is extraordinarily loud,” says heliophysicist Craig DeForest, of the Southwest Research Institute’s Department of Space Studies. He responded to a Reddit thread in 2015 asking what it would be like if we could hear the sun. Based on some quick calculations (and a selective ignorance of physics) the answer is clear, he says. The sun would be absolutely deafening.

This is because the sun, though it may look smooth and calm from Earth, is actually a maelstrom of superheated plasma. The nuclear reactions that power a star cause massive convection cells of superheated gas to rise and fall constantly across its surface. On our sun, there are about a million of these at any given time, each about the size of Texas.

“You have to imagine something the size of Texas emerging from below the surface, burning out and sinking, all in the space of five minutes,” DeForest says. “That’s an extraordinarily violent process — it would create a tremendous amount of sound.”

Convection cells on the sun, imaged by the Daniel K. Inouye Solar Telescope. Each is about the size of Texas, on average. (Credit: NSO/AURA/NSF)

He calculates each of these cells emits about 100 to 300 watts of sound energy per square meter, about the same as a police siren. And because the sun’s surface area is around 10,000 times larger than Earth: “Imagine 10,000 Earths covered in police sirens, all screaming,” he says.

Of course, the Earth is around 92 million miles from the sun, so the sound would be somewhat attenuated by the time it got here. DeForest pegs the sun’s din on Earth at around 100 decibels, a bit quieter than the speakers at a rock concert. That’s during the day, of course. At night, as we turn away from the sun, the roar would fade. Perhaps we might even be able to hold conversations.

The sound itself would be something like a dull roar, DeForest says, because the sound waves coming at us would be composed of so many different frequencies. Imagine standing next to Niagara Falls all the time (it would actually be even louder — Niagara clocks in at around 90 decibels).

But to concoct a world where the sun is audible, we need to forget a few key things: The vacuum of space, of course, but also the fact that sound waves tend to steepen as they travel over long distances. This means that they will eventually break upon themselves and crash, much like ocean waves, DeForest says.

In this scenario, even if sound could travel through space, the waves wouldn’t even make it out of the sun’s corona, or atmosphere. Instead, they’d implode as shock waves, dissolving into heat.

And, if we extrapolate the experiment to the realm of biology, it’s possible an audible sun might have negated the very concept of hearing itself. Any creatures that evolved in a world suffused by a perpetual roar might have very different uses for hearing. Indeed, given they likely couldn’t ever make out any useful sounds at all, organisms living in this fictional world may never have evolved the ability to perceive sound.

“Sound is much more useful to us in an environment where we’re not at a rock concert all of the time,” DeForest says. “It’s fair to say in that hypothetical situation we probably wouldn’t be able to hear at all.”

In all, it’s best the sun’s clamor remains locked away by the nothingness of space. But the thought experiment is a potent reminder of our star’s awesome power. Anything that could make itself heard 92 million miles away is a potent force indeed.