If you plummeted into a black hole, your body would be ripped apart in a process called “spaghettification.” 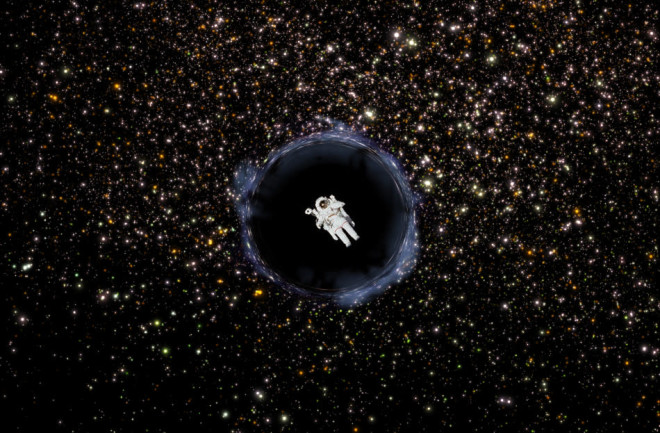 If an astronaut fell into a black hole, they wouldn't have a peaceful ride. They'd be stretched out like a noodle. (Credit: NASA (astronaut); NASA/ESA and G. Bacon, STScI (black hole illustration)

Sorry, science fiction fans. You can’t actually survive a trip through a black hole. And if you tried to take a plunge into one, like Matthew McConaughey in the movie Interstellar, you’d be ripped apart long before you could find out what’s on the other side.

What is a Black Hole?

To fully appreciate why you can’t just swan dive or pilot your spaceship into a black hole, you must first understand the basic properties of these gravitational goliaths. Simply put, a black hole is a place where gravity is so strong that no light — or anything else, for that matter — can escape.

Black holes are aptly named because they usually don't reflect or emit light. They’re only visible when they’re feeding on stars or gas clouds that stray too close to their boundary, called the event horizon. Beyond the event horizon lies a truly minuscule point called a singularity, where gravity is so intense that it infinitely curves space-time itself. This is where the laws of physics, as we know them, break down, meaning all theories about what lies beyond are just speculation.

Black holes seem exotic to most of us, but they’re commonplace to scientists. Physicists had toyed with theories about similar objects for decades before Albert Einstein’s general relativity predicted their existence. However, the concept wasn’t really taken seriously until the 1960s, when extremely compact stars were discovered. Today, black holes are considered an ordinary part of stellar evolution, and astronomers suspect our Milky Way galaxy holds millions of them alone.

Choose Your Own Black Hole Adventure

Black holes come in different varieties and can be modeled with different levels of complexity, like whether or not they spin or have an electrical charge. So if you jumped into one, your exact fate might depend on which sort of black hole you choose.

Stellar-mass black holes form when very large stars finish burning their fuel and collapse into themselves. Supermassive black holes live in the centers of most galaxies, and likely grow to their extreme sizes — up to tens of billions of times more massive than our sun — by consuming stars and merging with other black holes. Intermediate-mass black holes are still mysterious, and only a few suspected examples have been discovered, but astronomers think they may form through a similar process of accretion, just on a smaller scale.

Stellar-mass black holes may be puny in comparison to their bigger cousins, but they actually boast more extreme tidal forces just beyond their event horizons. This difference occurs thanks to a property of black holes that would likely surprise some casual observers. Smaller black holes actually have a more dramatic gravitational gradient than supermassive ones. In other words, you only have to fall a very short distance to experience an extremely noticeable difference in gravity.

If you were free-floating in space near a stellar-mass black hole that wasn’t feeding on anything, your only hint that it exists might be the gravitational magnification, or “lensing,” effect it could have on background stars.

But as you flew closer to this strange spot, you’d be stretched in some directions and squished in others, a process that scientists call spaghettification. This is because the black hole's gravity compresses your body horizontally while pulling it like taffy in the vertical direction. If you jumped into the black hole feet first, the gravitational force on your toes would be much stronger than that pulling on your head. Each bit of your body would also be elongated in a slightly different direction. You would literally end up looking like a piece of spaghetti.

So, as you fell into a stellar-mass black hole, you probably wouldn’t worry much about the existential mysteries you might be able to unlock on "the other side." You’d be as dead as spaghetti-shaped doornail hundreds of miles before you hit the singularity.

And this scenario isn't entirely based on theory and speculation, either. Astronomers witnessed such a “tidal disruption event” back in 2014, when several space telescopes caught a star wander too close to a black hole. The star was stretched out and shredded, causing some of the material to fall beyond the event horizon, while the rest was flung back out into space.

In contrast to falling into a stellar-mass black hole, your experience plunging into a supermassive or intermediate-mass black hole would be slightly less nightmarish. Though the end result, a horrible death, would still be your fate, you might actually make it all the way to the event horizon and manage to start falling inside the singularity while still alive.

In this case, at least in theory, you could see out into surrounding space. But no one would be able to see you once you passed beyond the event horizon. Even if you were holding a flashlight and tried to shine it out, the light would fall back down into the singularity with you.

Meanwhile, you'd see that everything within the event horizon was warped by extreme gravitational forces, thanks to an effect astronomers call gravitational lensing. (Not to mention the wild time dilation effects.)

Of course, no matter what type of black hole you fall into, you're ultimately going to get torn apart by the extreme gravity. No material, especially fleshy human bodies, could survive intact. So once you pass beyond the edge of the event horizon, you’re done. There’s no getting out. Even if you were still alive, you’d have to travel faster than the speed of light in order to escape. But as we know, nothing in the known universe can do that.

But don't fret just yet; the closest known black hole to Earth is still a daunting 1,000 light-years away. However, astronomers suspect there are many more lurking much closer, perhaps as little as a few dozen light-years from Earth. In fact, some researchers think the distant solar system's hypothetical Planet Nine is actually a primordial black hole that's roughly the size of a baseball.

With that in mind, it's possible (albeit unlikely) that if humans survive long enough to pioneer advanced space travel technology, we might be able to visit a black hole up close. And if we do, maybe we'll even toss a few probes into the black hole to test what happens at the event horizon.

Unfortunately, because nothing can escape the event horizon, not even information, we’ll never be able to know for certain what goes on when matter reaches the point of no return. So, even if you do find yourself with the opportunity to take a cosmic cliff dive into a black hole, for safety reasons, you probably should resist the urge.