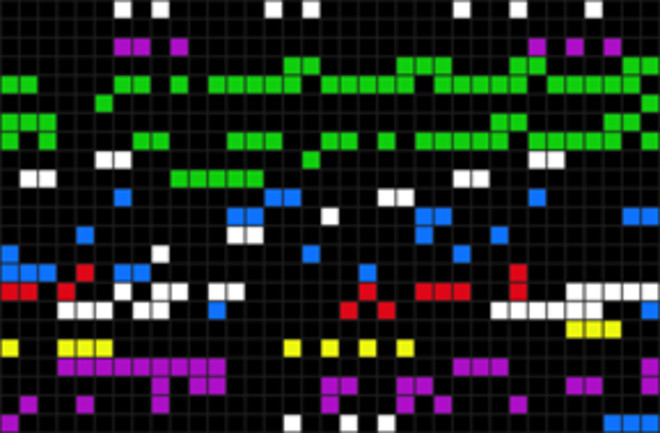 A shifted version of the Arecibo message transmitted in 1974, showing what it might look like if laid out incorrectly as a 73 x 23 grid instead of 23 x 73. (Credit: Jarmo kivekas) Projects like SETI and Breakthrough Listen are dedicated to spotting the signals extraterrestrials may be sending out into the universe. But there’s an additional side to the story — if E.T. did contact us, would we even be able to understand him? That was the topic of a recent gathering of linguists that took place in Los Angeles, California, over the Memorial Day weekend. The daylong workshop, “Language in the Cosmos,” was organized by METI (Messaging Extraterrestrial Intelligence) and held May 26 as part of the 2018 National Space Society’s International Space Development Conference (ISDC). It marked the third such workshop held at the ISDC by METI on the topic of extraterrestrial contact and communication. On Earth, according to linguist Noam Chomsky, there is a sort of “universal grammar” that connects our languages, no matter how varied: “Chomsky has often said that if a Martian visited Earth, it would think we all speak dialects of the same language, because all terrestrial languages share a common underlying structure,” said Douglas Vakoch, president of METI, in a statement on the workshop issued by the organization. “But if aliens have language, would it be similar to ours? That’s the big question.” While some of the workshop’s presentations offered a positive vision of future communication with extraterrestrial intelligence, others brought up the possibility of miscommunication and misunderstanding, particularly based on the fact that assumptions made by humans and alien civilizations might be wildly different. The workshop’s closing talk was given by David Peterson, who invented the Dothraki language spoken in HBO’s “Game of Thrones.” Although we have not yet received a definitive signal from an alien civilization, researchers will strive to improve detection techniques and linguists will keep pondering just what a message will look and sound like, when it does come. By looking back at past messages, such as the Voyager Golden Record, and improving our understanding of the evolution of language on Earth, humanity can continue to hone the way in which we might reach out to and talk with beings from another planet.

Want to dig deeper into the subject of alien languages? We’ve got you covered with exclusive Astronomy.com bonus content: Is there a universal language?.