What to Read This Summer

Evolution, the first weathermen, Planck in perspective and those furry feelings. 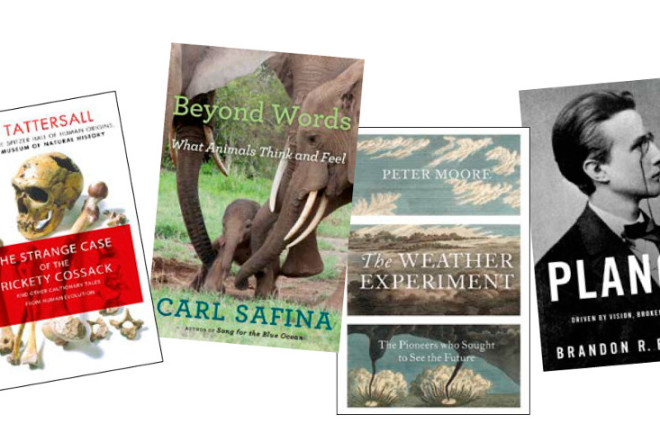 The Strange Case of the Rickety CossackBy Ian Tattersall

Venerable paleoanthropologist Tattersall opens his latest book recalling the time when, as a young researcher in the ’70s, he traveled to the Comoros Islands to study lemurs and instead found himself in the midst of a coup. But Strange Case is more than reminiscing. It’s an insightful look at how — and why — we Homo sapiens so often get human evolution wrong. Tattersall makes it clear that he’s arguing his interpretation of the fossil record, but even his opponents will find themselves chuckling at many of his wry, sometimes withering critiques, from the near-comical initial interpretation of the first Neanderthal skeleton to be unearthed (referenced in the book’s title) to ongoing debate on whether our family tree is actually a bush.

Most of us have been guilty of anthropomorphizing animals at one point or another, and in doing so we often fail to appreciate the rich complexity of other species’ emotions and communication skills. MacArthur fellow and noted conservationist Safina aims to broaden our understanding of how the finned, furry and feathered think and feel. He blends current science with his own observations of animals in the wild (and, in the case of his pets, on the couch), making a beautifully written, provocative case for seeing animals through their eyes.

Long before Doppler radar, a small but dedicated group of Englishmen attempted not only to understand weather scientifically, but also to standardize how it was measured and described. With Dickensian detail, Moore brings to life the likes of Francis Beaufort, with “sabre scars on his arms, reminders of his days at sea,” and the determined Robert FitzRoy. Years after captaining the HMS Beagle with a certain Charles Darwin aboard, FitzRoy promoted the first formal storm-alert system and coined the term weather forecast. From ideological scuffles to moments of childlike delight — such as pioneering meteorologist James Glaisher’s fascination with snowflake shapes — Moore captures the suspense and wonder of a scientific discipline’s birth.

Max Planck’s place in the physics pantheon was secured around 1900 when his thermal radiation equation set the stage for modern quantum theory. More compelling, perhaps, is the tragic arc of his life, from the early work that put him in the forefront of German science to the later years he spent bending and nearly breaking under a Nazi yoke. After losing his first three children to illness and war, Planck, at age 87, endured the execution of his beloved youngest son, Erwin, linked to the 1944 assassination attempt on Hitler. Physicist Brown illuminates all these episodes — as well as Planck’s celebrated friendship with Einstein — with heartbreaking empathy.