We round up the science books you should make sure to check out this month. 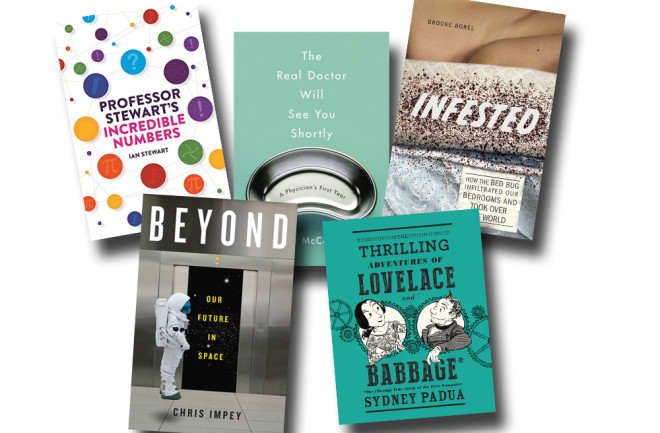 It’s hard to square — no pun intended — our technologically advanced world with widespread math phobia. Numbers power our lives like never before, yet many people find a trip to the dentist preferable to wrestling with an equation. Enter emeritus math professor Stewart. With a chatty tone and sizable wit, he introduces numbers more as beloved sitcom characters than concepts that puzzle and perplex. Full of history, pop culture references and real-world examples, Stewart’s ode to the odds and evens infects the reader with his own self-described “enchantment” by numbers.

Beyond: Our Future In SpaceBy Chris Impey

To understand the current, mostly privately funded space race, University of Arizona astronomer Impey begins by looking back. Way back. Drawing a parallel to the first modern humans to leave Africa, Impey casts space exploration and colonization as inevitable for our insatiably curious species. That philosophical undercurrent continues through lively discourses on space tourism, early rocket science, alternate reality, the multiverse and more.

The Thrilling Adventures of Lovelace and BabbageBy Sydney Padua

A heady mix of alternative history, adventure and lots and lots of footnotes, this graphic novel follows two almost-heroes through a parallel universe, fighting crime and restoring order with their 1830s steam-powered computer. In reality, mathematician Charles Babbage never finished the machine, and Ada, Countess of Lovelace, never saw her ingenious computer programs brought to life. But that doesn’t stop film animator Padua, who blends fanciful situations, mathematical truths and a heap of historical facts to create an outlandish, enlightening tale.

Bed bugs have overstayed their welcome by millennia, and journalist Borel explains why with an up-close look at how these bloodsuckers evolve and develop resistance to our myriad methods of extermination. From scientists who feed their own blood to colonies of bed bugs (just to learn how to kill them) to extreme measures such as dousing the critters with DDT or setting mattresses ablaze, we’ll do anything for clean sheets. But we won’t win, says Borel, as bed bugs wriggle into the fabric of our economies, cultures and collective psyche.

The Real Doctor Will See You ShortlyBy Matt McCarthy

They may seem superhuman sometimes, but doctors are people, too. McCarthy gives readers a brutally honest, often darkly comical glimpse into the formative days of his medical career. Teeming with tales of transformative mentorships and patient-doctor bonds, close calls and McCarthy’s own life-threatening medical mishap, The Real Doctor is an enthralling account of the metamorphosis of an uncertain medical resident into a skilled physician.