German artist Dirk Löchel has created what sci-fi lovers previously could only dream of as they tirelessly scoured wikis and forums—the single greatest chart of famous science fiction spacecrafts and their sizes. Prepare to wipe the nerdy drool from your mouth (and be sure to click to enlarge the geeky goodness): 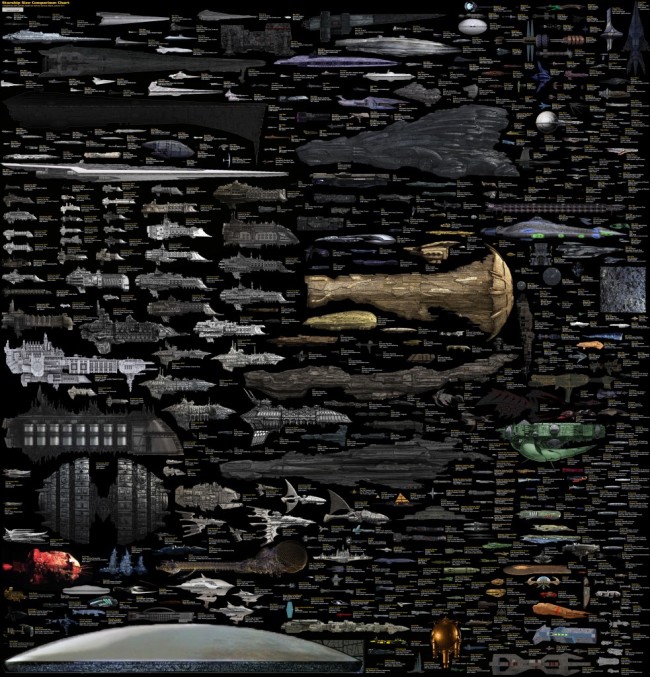 As of this writing, Dirk’s amazing effort has garnered more than 1.3 million hits and hotlinks. It is as if every sci-fi lover was culturally compelled to click on the impressive 10-megabyte image as it took over Tumblr and Twitter (I certainly was). And despite how easily it was shared, its creation wasn’t a simple drag and drop operation, as you can imagine. Dirk told me in an email exchange:

I'm pretty baffled how far it has come and how much interest it generated. I put in surely two, three weeks' free time for the current version. It has grown, the first charts were done in a few hours, but they covered only a fraction of the ground the large one covers.

Dirk also told me that the reason he spent so much time creating the chart wasn’t necessarily because of an obsession with any one fiction or story, but because of a love for the “what if” scenarios of fan fiction:

My great love in terms of Sci-Fi is near-future cyberpunk, so I'm no die-hard fan of any of these ships' universe—but I've always been fascinated by crossover stories ever since I read the first Star Wars/Star Trek fanfiction in the late 90s. And that idea—the what if—kind of always stayed with me and led to this comprehensive comparison chart. Others have come before me, among them Dan Carlsson and of course Jeff Russell's Starship Dimensions. That also was a huge help in building this chart (and has a ton of other great material this chart does not cover), but I have never had all ships of a certain spectrum on one chart, so I decided to make one about two months ago, and the rest, as they say, seems to be history.

With Dirk’s enormous effort, I feel that it would be a waste if we didn’t dig a bit deeper into this work of fanlove. So with a red marker and a spreadsheet, I tallied up each and every one of the included ships in order to do a little math, and to see what I could uncover about our imaginations. 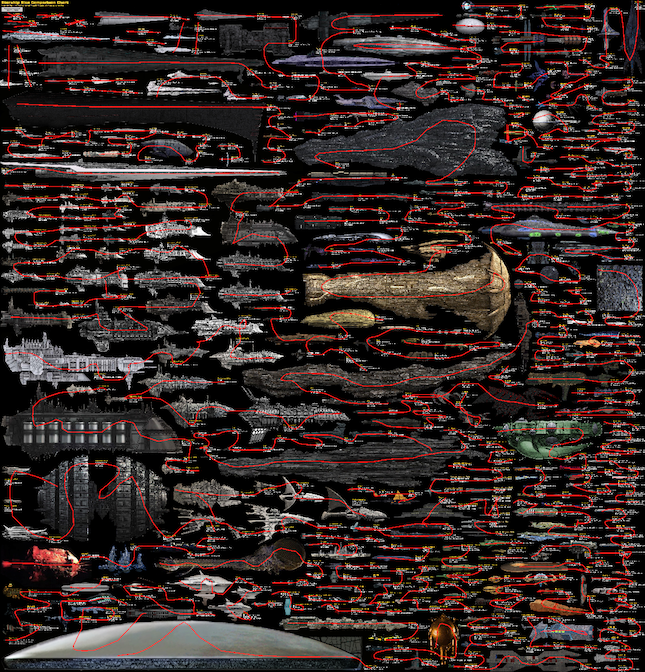 All in all, I counted 529 spacecraft with an average length of 2,566 meters—about ten times the length of the ill-fated Hindenburg zeppelin. This average length is no doubt pulled upwards by the ridiculous lengths of Star Wars Eclipse-Class Super Star Destroyers and Independence Day motherships. That’s interesting by itself, but I think we can go deeper. Grouping each craft by its canon, I calculated the average spacecraft length for each game, movie, or show. I then looked up the release date for each of those games, movies, or shows and used those to plot the average lengths across time. This is what I came up with:

The graph seems all over the place, perhaps reflecting the variability of science fiction itself. But one more layer down, I think looking at these ships tells us something about our dreams of space and travels through it. From Dirk’s chart, the average length of a spacecraft in the 70s was 1,487 meters. In the 80s and 90s it was 3,273 meters and 3,383 meters, respectively. Most recently, the average ship length for the 010s was 1,736 meters. Like our universe, the size of sci-fi ships looks to have gone through a period of inflation before making it into the 21^st century. But why? To me, it seems like after we landed on the Moon in 1969 there was a short period before the collective creative minds behind our favorite fictions caught up to this new reality. Throughout the 80s and 90s then, we explored the possibilities of humans in space. Different ship sizes and designs filled this new cosmic playground. However, as the 90s came to a close, it seems as if our dreams shrunk. Reality changed. In the 21^st century we’ve put rovers on Mars and a probe past the edge of our solar system, unbelievable feats themselves, and perhaps these efforts made the thought of humans traveling through space in a ship a mile long too unbelievable even in our fictions. We are now getting a handle on actual space travel, and the graph seems to show that our imaginations are too. Films like Elysium and Star Trek Into Darkness portray more realistic endeavors. In short, pragmatism seems to have shrunk the Independence Day visions of space travel. Or maybe not. Fellow sci-fi enthusiast Joe Hanson of It's Okay To Be Smart offered me a slightly different explanation:

I think that after the 1950s and 60s, after we had some actual experience in space, futurist-minded engineers began to dream big and realize that when things were constructed IN space, terrestrial engineering rules no longer applied. Hence the bigger and badder space machines--spacecraft that are designed for the purpose of inflicting massive destruction seem to be bigger, and ships intended for the honorable intent of exploration seem to be smaller. And during that time, the Cold War had us building a massive military to defend ourselves against a big, bad, mysterious enemy. Maybe that's why enemy ships of that period seemed to loom over us like a literal Iron Curtain, only with hyperdrive. Once we stopped dreaming about ways we could be destroyed, we started dreaming of ways to explore, and those are the dreams that we really wanted to come true. Spacecraft of the sci-fi world are without a doubt getting smaller, but I'll hold out hope that it's not because our dreams have shrunk. Rather, maybe it means that our destinations seem closer to within reach than ever before.

Of course, maybe these explanations are just fan fiction. Dirk’s fantastic chart doesn’t include every sci-fi ship, making the analysis incomplete, and maybe averaging ship lengths says nothing of our imaginations. But how we fabricate fiction is undoubtedly embedded in pop culture. In the age of science blogging and an insistence on accuracy (due in part to the radical upgrades to graphics tech, at least for movies), I don’t think it’s a stretch to think that our favorite fandoms have taken notice of new constraints. After all, having constraints that first mirror and then expand the knowledge of the time is what makes science fiction so wonderful. And if the appeal of science fiction is this combination of science and art, the next great space epic will probably be the one that is more than average. -- More Sci-Fi Science: