What the Curiosity Rover Achieved, and What's to Come

An interview with Marc Kaufman, author of the new book Mars Up Close: Inside the Curiosity Mission. 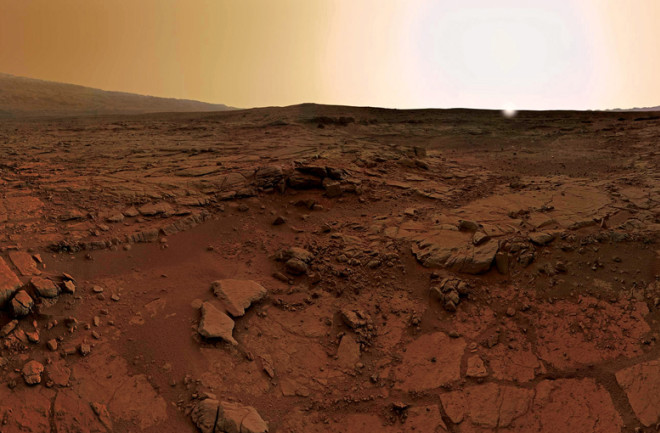 This panorama of Gale Crater was stitched together in 2013 from images taken by Curiosity’s Mastcam (mast camera). | NASA/JPL/MSSS, processings and mosaic: Olivier de Goursac, 2013/National Geographic, MARS UP

Curiosity has already wowed us with a series of splashy discoveries since its complex landing on Mars in 2012. But the rover’s biggest achievement may be yet to come.

At press time, Curiosity was closing in on its target destination: 18,000-foot Mount Sharp in Gale Crater. Marc Kaufman, author of the new book Mars Up Close: Inside the Curiosity Mission, talked to Discover about what the rover and the scientists behind it have already achieved, and the tantalizing possibilities ahead.

What has impressed you most about Curiosity’s time on Mars so far?

The stuff they’ve been finding has been astounding. They’ve not only made the determination that the area was habitable, but also that it’s not that different from other areas of Mars. We’ve always called Mars the Red Planet, but Curiosity showed us, for the first time, that it’s not red — there’s just a layer of reddish iron oxide on its surface. For the first time, we saw the inside of a Martian rock. Curiosity ran over one, then stopped and took a picture of it, and we saw it was bluish-gray — just like on Earth.

Mars Up Close also delivers an intimate look at the people behind the rover, with whom you’ve spent considerable time. What was one of your most memorable moments with the mission team?

Not many people know that the mission, at one point, was less than an hour away from failing. I was at JPL [Jet Propulsion Laboratory], in the rooms when stuff was happening a couple of months after the landing. A computer got stuck and wouldn’t reboot. It was stunning to watch the people there deal with this. People understood this intricate computer’s operations in their heads. It was like it was hardwired into their heads.

What kind of surprises might await Curiosity at Mount Sharp?

Mount Sharp is known to the Curiosity team as “the promised land.” The geological layering will tell the history of Mars, including the presence of minerals that can only be made where there’s water.

Inventor and entrepreneur extraordinaire Elon Musk, in the introduction to Mars Up Close, makes a passionate case for sending humans to the planet. Are you ready to buy your ticket?

Me, I’m not really keen on heights, or small places. I’m not going to go, but I think there is a good chance others will within the next two decades.

Adam Steltzner, who developed Curiosity’s Skycrane and is an engineering rock star, told me that in terms of designing a capsule large enough for humans and getting it onto Mars, the technology is totally feasible. The issue is whether there is the determination to pay for it.

What’s your 30-second pitch for why we should go?

The answer can’t be just “for the science,” because most of the science can be done from Earth. It has to be to make a grand statement about what humans can achieve — that’s something we do well, and it inspires people to go into the fields we need them in.

[This article originally appeared in print as "Red Rover, Red Rover, Bowling Us Over."]