What 'Rock Tides' Reveal About Movements of the Earth 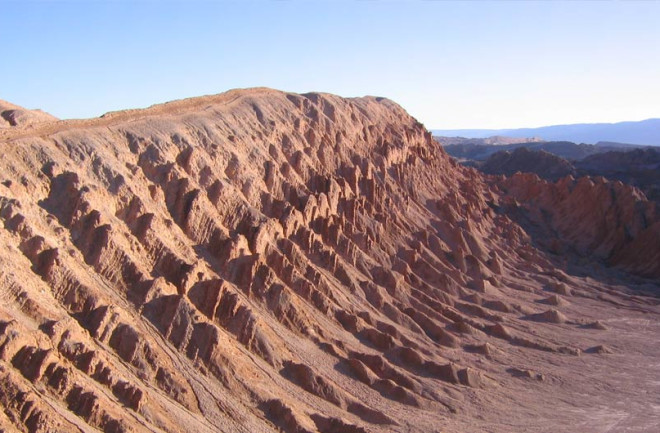 Rock formations in the Atacama Desert. (Credit: Phil Whitehouse via Flickr) (Inside Science) -- Earth’s interior teems with movement and heat, a characteristic that manifests in memorable fashion as volcanoes and earthquakes. But even Earth’s more seemingly stable solid rocks move, too. Understanding just how rocks respond when they are pushed and pulled by natural forces, such as tectonic activity, or human-caused forces, like hydraulic fracturing, can make mining, construction, natural gas production and other projects safer. It can also improve geological monitoring in fault zones. Now, a new technique uses the fingerprints of the moon, sun and surf to pin down rock behavior. Rocks feel solid, but their slight imperfections and cracks give them elastic tendencies, which change when the rock is under some sort of external stress, whether from heat or water or the tidal pull of the moon and sun, said Nicholas van der Elst, a seismologist at the U.S. Geological Survey who was not involved in the new work. “For the most part, rocks are elastic in that they change shape when you apply force, but they recover completely when the force is removed. There’s also a small amount of squishy deformation, which takes some time to recover,” he said. These shape changes are captured in a measurement called strain, which can give direct information about rock properties like strength and stiffness. But strain is difficult to measure away from Earth’s surface, van der Elst said. Scientists can expose small samples to titanic pressure and heat in lab settings or conduct field measurements of induced seismic activity — like mini-quakes set off by explosive charges — but both these approaches have key limitations such as high costs or questions about how well they replicate the natural environment. In the new study, researchers in Germany were able to link rock strain to seismic velocity changes, using a long-term seismometer station. The seismic velocity measurements serve as a proxy for strain, van der Elst said. And instead of having to squeeze the rock themselves, the scientists let the moon and sun do it for them. Christoph Sens-Schönfelder of the GFZ German Research Centre for Geosciences in Potsdam and Tom Eulenfeld of the University of Jena in Germany sifted through 11 years of data from a seismic monitoring station in the Atacama Desert of northern Chile. The Patache station rests on a hillcrest along the Pacific coast, less than 2 kilometers from the shore, in an area where nothing grows save for microbes living in salt rock. The only signs of life are occasional lichen flakes and seabird burrows, and distant lights from copper and salt mines sprinkled through the Atacama. The station keeps tabs on seismic activity in an area known for earthquakes. But it can detect more sensitive ambient movements, too. As the moon and sun perpetually tug on Earth, the tides slosh water back and forth all over the planet, causing shorelines to shrink or swell. But not only the water moves: Earth’s insides are strained, too. In this way, the tides serve as a controlled deformation experiment, Sens-Schönfelder said. He and Eulenfeld analyzed the Patache recordings for seismic echoes — waves that struck the detector, bounced off the surrounding rock, and then hit the detector again. When they plotted the echo patterns, they could see variations related to the pounding of surf from the Pacific Ocean, a couple kilometers away. They also noticed patterns that repeated every day or half day. They realized the half-day oscillations actually represented two signals, corresponding to 12.42 and 12.56 hours. The 12.42-hour period precisely matches the lunar tide, while the longer oscillation matches the elliptical orbit of Earth’s satellite. The elliptic orbit is the same effect that leads to an occasional “supermoon” when the moon is closer to Earth. “We were surprised to see the effects of the tides so clearly,” Sens-Schönfelder said. What’s more, the rocks don’t respond instantaneously, meaning the rock takes some time to relax after it is pushed and pulled. The researchers also found something unexpected: The sun was producing a greater effect on the rock tides than they thought it would. Though the sun does contribute to Earth’s tides, its pull is greatly outshone by that of the moon -- so why would the one-day seismic signal be so strong? The researchers decided it was related to the sun’s warmth, heating the surface during the day, only to disappear at night and allow the surface to cool and contract. “The most surprising thing was that we found an interaction between the tidal and thermal effects. They modulate each other and cause distinct peaks in the spectrum,” Sens-Schönfelder said. The researchers are not sure how these two signals are interacting. Van der Elst said the rock deformation and relaxation, or “squishiness,” is faster than the timescales of the tides, which makes it a difficult measurement outside of a controlled lab setting. “It's a real achievement to have measured this rock property in the field with such precision,” he said. Sens-Schönfelder said the researchers were able to separate the effects of temperature and tides by looking at the cycles of the sun and moon — "and the fact that the moon does not cause any heating,” he added. “Disentangling both effects from the sun alone would be much more difficult.” Still, the results are precise enough that others should be able to perform similar measurements almost anywhere, and use the signals of the moon and the sun to measure the pulse of the Earth. [This story was originally published on InsideScience.org.]