What Lurks Beneath the Central Andes? 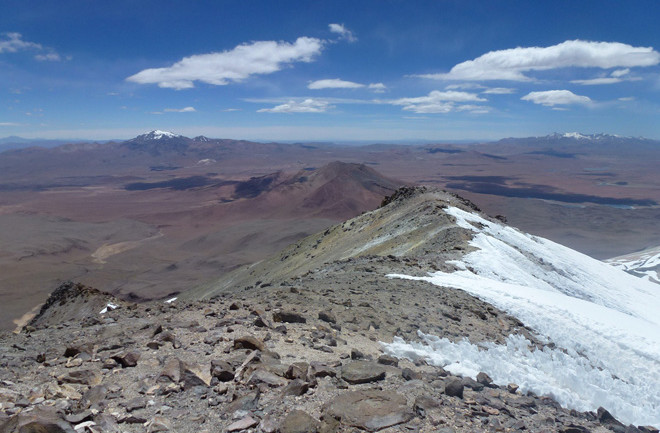 The view from the summit of Uturuncu in Bolivia, looking across the Altiplano-Puna Volcanic Complex. What lies underneath the surface is one of the most volcanically-productive places on Earth. Image: Léo Guellec / Flickr. Geology is full of questions -- that is why it is such a vibrant science. There are so many questions about how the processes that make and destroy rocks on this planet work and, in many cases, we've only scratched the surface (literally and figuratively). Being a volcanologist/petrologist, I am especially interested in questions about the source of magma and where it is stored in the crust -- tricky things to quantify because all our evidence is circumstantial. We have a good idea of the general sources of magma in different tectonic settings:

Once those magmas move away from the source zones into the crust -- oceanic or continental -- what happens is still hotly debated. We know through compositional investigations of erupted lavas that most magma interacts with the crust in some way -- digesting and incorporating crust or stalling in the crust to cool and crystallize, thus changing its composition. We also know that magmas can mix, thus changing their composition. Understanding this evolution is tricky, though. Like I said, much of our evidence is circumstantial: What are the compositions of the magma and minerals in the magma recording about these events? We need to look at the elemental and isotopic compositions and unravel the story that they record. We have the book and pages, but we don't quite know what order the pages should fall in and we definitely don't see the book being written. You go to any geologic meeting and you'll quickly see that the how, where, and how long of these processes is still being investigated on all fronts. One way we can try to get a peek at the author of magma at work is through geophysical investigations of the crust. Again, we're not truly sticking our head in the studio to see the words being written, but we can collect data and model what the state of things inside might be. Take that information and the circumstantial evidence from the composition of magma/crystals, and we can be start to put the book together in the proper order and read the evolution of the magma in the crust. A recent study by Rodrigo del Potro and others in Geophysical Research Letters looks at the state of the crust in the Central Andes of Chile and Bolivia. In this study, del Potro and others took new geophysical data (specifically, gravity measurement - more on that below) about the state of the crust underneath the Altiplano-Puna Volcanic Complex (APVC, roughly 21-24ºS) and combined it with other geologic evidence to model where magma is being stored in the middle Andean crust (15-45 km). The continental crust in this part of the Andes is especially thick, upwards of 70 km thick. For comparison, the continental crust in the Cascades of North America is closer to 35 km thick, so Andean crust is double that thickness. So, in crust that thick, you might wonder where -- and in what state -- is all the magma that is the source of the abundant Andean volcanoes. Using these new data, del Potro and others try to answer that question. The long-and-short is that there is a lot of melt in the crust and some of the topography of the surface of that magma body correlates with known uplift at Uturuncu (see below), and some doesn't correlate with any known uplift).

Rapid uplift between 1995-2005 at Uturuncu in Bolivia. This deformation may be related to rising magma from the APMB. Image: Figure 6 from Sparks and others (2008) Before everyone gets all uppity about giant bodies of magma in the crust, we have already known that there has to be a lot of magma in the APVC. The calderas within the region have produced over 12,000 km^3 of volcanic material over the last ~23 million years. That is a lot of magma, much of it in the form of giant ash flow sheets (ignimbrites). Those giant eruptions (like those at La Pacana) have waned in the past few million years, but this doesn't mean that there isn't active volcanism in the APVC today -- volcanoes like Ollagüe, Lascar, and San Pedro all lie in or near the APVC. Unlike giant ignimbrites, these typical composite volcanoes don't need huge storage tanks of magma as they erupt much smaller volumes. So, finding a large body of partially molten material in the middle crust is fascinating because it means that magma might reside in the crust for millions of years after large eruptions occur, rather than being ephemeral reservoirs that are completely drained (however, the storage of magma in the upper crust, < 10 km, might be where you get ephemeral bodies of magma that get drained). Del Potro and others use gravity surveys to look at the structure of the crust -- simply put, gravity measurements can be used to model the density of the crust at certain depths. In the case of the Altiplano-Puna Magma Body (APMB), the crust is 150 kg/m^3 less dense than the rest of the crust starting at ~14-20 km below the surface. This deficiency could be explained a number of ways, including crystallized granite or thermal expansion, but in both of those cases, the data doesn't fit the model. However, if the crust is modeled as a mix of solid, crystallizing dacite and 25% dacite magma, then the density contrast can be explained. This is very much in line with the ideas of "crystal mushes", where cooling magma bodies are a mix of crystals and liquid magma and at proportions like 25% magma to 75% crystals, it would likely behave rigidly, rather than as a liquid. So, this leads to the question: how do this magma body produce eruptions?

A model for magma extraction from the Altiplano-Puna Magma Body, with low density diapirs of melt rising through the crust to become rhyolite lenses. Image: Figure 4 from Del Potro and others (2013). Well, even when the magma body is dominantly solid, it is still hotter and wetter than the surrounding crust, so that means it is buoyant. It will rise through the crust due to the density difference with the crust and while on the way up, Del Potro and others suggest that the magma continues to crystallize and mix, leaving crystals behind so the top of that rising body of magma becomes more enriched in the buoyant melt (see above). It also becomes more evolved -- that is, more silica rich -- so a dacite magma can become a rhyolite, which is the type of magma found in many of the large caldera-related ash flow tuff deposits in the APVC. Across the APMB, there are 6 "domes" of lower density (see below) that have been identified in the gravity data and these might represent areas of rising magma. The domes are big, too, 12-20 km in diameter and spaced about 25-40 km apart rising from the ~14 km surface of the APMB.

Modelled shape of the negative density anomaly (APMB) assuming 25% melt with 75% crystals. Image: Figure 2a from Del Potro and others (2013) Now, before you think that these are the sources of all those big calderas and volcanoes across the APVC, one interesting finding in Del Potro and others is that most of these domes don't correlate with any known volcanic edifice (see above). There is one that is broadly correlative to the rapid Uturuncu inflation, but that is about it. The significance of the fact that these domes aren't at the roots of known volcanoes is still unknown but it does make for some potentially interesting speculation about how magma might be transported from that hot zone in the middle crust to the volcanoes along the APVC. So, here we have an example of looking for the printing press, so to speak, of all the magmas across the APVC. Questions remains, as they always do in geology, but this study shows that the more we can combine these different sets of data, the more we can make a viable model for what is going on depth beneath our feet. References: Del Potro, R., Díez, M., Blundy, J., Camacho, A.G., and Gottsmann, J., 2013, Diapiric ascent of silicic magma beneath the Bolivian Altiplano: Geophysical Research Letters, v. 40, no. 10, p. 2044–2048, doi: 10.1002/grl.50493. Sparks, R.S.J., Folkes, C.B., Humphreys, M.C.S., Barfod, D.N., Clavero, J., Sunagua, M.C., McNutt, S.R., and Pritchard, M.E., 2008, Uturuncu volcano, Bolivia: Volcanic unrest due to mid-crustal magma intrusion: American Journal of Science, v. 308, no. 6, p. 727–769, doi: 10.2475/06.2008.01.