What Keeps an Astronaut Awake at Night? Cosmic Rays 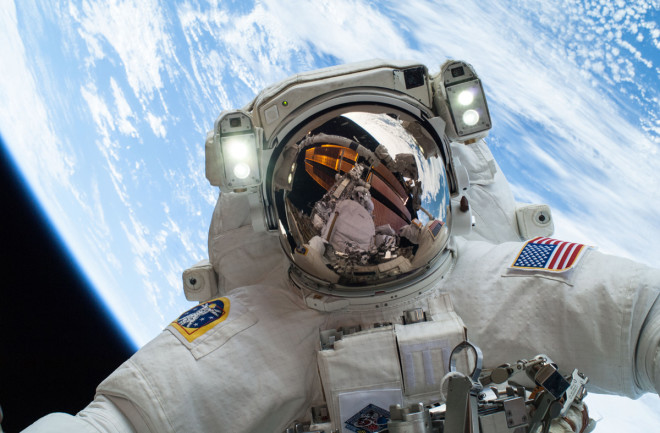 (Credit: NASA) In space, astronauts see stars in more than one way. Ever since the 1960s, space travelers have reported seeing bright flashes of light even with their eyes closed. They're usually described as either bursts or streaks, and are most often white. They seem to be frequent, too, many astronauts complained of trouble sleeping because of the disruptive scintillations. The culprit seems to be cosmic rays, highly energetic particles emanating from far-off sources that are normally blocked by our planet's magnetic field and atmosphere. In space, cosmic rays abound. In fact, they're a significant concern for future space travel as they could cause harmful mutations in our cells. In this case, however, the particles seem to be interacting with either our retinas or directly with our brains, scientists still aren't sure. That cosmic rays are at fault has been confirmed by multiple experiments aboard both the Apollo missions and on later trips to the space stations. The first was a simple analysis of astronauts' helmets from the Apollo 8 and 12 missions, which found track marks in the plastic consistent with the passage of high energy particles. Further experiments using particle detectors that fit over an astronauts' head tied cosmic rays to the flashes themselves. The astronauts pressed a button whenever they saw a flash, and the observation was matched up with the detection of cosmic rays. So, where the flashes come from is no longer a mystery, but how cosmic rays actually translate to visible phenomena is still somewhat uncertain. One explanation is that fast-traveling cosmic rays are creating Cherenkov radiation within our eyes that's detected by retinal cells. Cherenkov radiation can be thought of as an optical sonic boom. When a particle moves through a medium faster than light can travel in it, it creates a shock wave that can be seen as visible light. This creates the characteristic glow seen in nuclear reactor pools, and it could be happening in our eyes as well. Though the name may suggest otherwise, it's not harmful to humans. There's some evidence that suggests Cherenkov radiation may not be the answer, though, or at least not all of it. Experiments on the ground using accelerators to pass heavy particles through participants' eyes also caused similiar flashes, even when the particles weren't moving fast enough to produce Cherenkov radiation. Researchers postulate that the cosmic rays could instead be interacting directly with our retinas, either causing nerves to fire or somehow tricking our retinal cells into thinking they perceive light. More controversially, the rays could also be hitting the visual centers of our brains and creating the illusion of light. For now, astronauts will have to simply put up with the phantom fireworks that accompany spaceflight. Future generations of space travelers might be better shielded, as finding a way to block cosmic rays will likely be crucial for long-term survival.