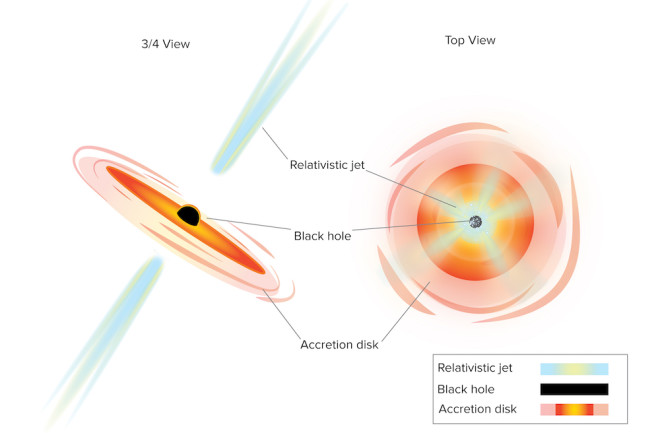 Many galaxies have supermassive black holes at their centers. These can feed on disks of gas and dust, shooting out jets of material at near light-speed. When the jets happen to point toward Earth, it’s considered a blazar. (Credit: Sophia Dagnello, NRAO/AUI/NSF)

On Thursday, researchers announced that they’d caught a single, tiny, high-energy particle called a neutrino that had rained down on Earth from a supermassive black hole some 4 billion light-years away.

Astrophysicists are excited because this is only the third identified cosmic object they’ve managed to collect the elusive particles from — first the Sun, then a supernova that went off in a neighboring galaxy in 1987, and now a blazar.

So, what is a blazar, anyway?

At the center of most galaxies — including our own Milky Way — there’s a gargantuan black hole that can have the mass of millions or even billions of suns. In some galaxies, this supermassive black hole may collect a swirling disk of gas, dust and stellar debris around it to eat from.

As material in the disk falls toward the black hole, its gravitational energy can be converted to light, making the centers of these galaxies very bright and giving them the name active galactic nuclei (AGN).

Some of these active galactic nuclei also shoot out colossal jets of material that travel close to the speed of light. Scientists call this a quasar.

But when a galaxy happens to be oriented so the jets point toward Earth — and we’re staring right down the barrel of the gun, as it were — it’s called a blazar. It’s the same thing as a quasar, just pointed at a different angle.

Those jets shoot matter at close to the speed of light in our direction and, we now know, produce high-energy neutrinos like the one detected by the IceCube instrument in September 2017.

The first blazar found was originally misidentified as an oddball of a star. In 1929, the German astronomer Cuno Hoffmeister published a catalog of 354 objects he thought were variable stars, or stars that get brighter and fainter over fairly short periods of time. This catalog included an object that was called BL Lacertae, or BL Lac for short, after the constellation it was in — Lacerta, the lizard.

By the late 1960s and 1970s, astronomers began to notice something funny about BL Lac. It did get brighter and fainter, but not in a regular, predictable way, and it seemed to emit a lot of light in the radio wave regime, which was unusual for stars. Further studies showed that BL Lac was too far away to be a star in the Milky Way galaxy. And in some ways, its behavior looked more like another mysterious object astronomers were finding — called quasars — than it did variable stars.

Eventually, astronomers found that BL Lac was in fact a bright object in the center of a distant galaxy. And they began to find other objects that shared BL Lac’s strange properties, calling them “BL Lac objects.” By 1980, they coined the name blazars, combining “BL Lac objects” with the somewhat similar “quasars.”

Studies in the 1980s and 1990s gave evidence that the bright radio light from blazars came from jets of material moving at relativistic speeds. By the mid-1990s, astronomers determined that blazars, quasars, and some other bright galaxy phenomena they observed were all in the same family of objects: active galactic nuclei.

Since then, improving technology has allowed astronomers to study blazars and other active galactic nuclei in new and improved ways. Putting telescopes like the Fermi Gamma-ray Space Telescope in orbit have let astronomers observe the high-energy X-ray and gamma-ray light coming from these objects that would have been blocked by the Earth’s atmosphere.

Now, we are entering an era of multi-messenger astronomy, where light is not the only information we can collect from the heavens. Gravitational waves first detected in 2015 allow astronomers to observe collisions of black holes and neutron stars. Tracking neutrinos to their source would help astronomers understand the physics behind extreme environments, like the relativistic jets of a blazar, beyond what light alone can tell us.

New tools bring new achievements. By expanding their toolkits beyond the realm of light to include first gravitational waves and now neutrinos, astronomers will begin to understand the cosmos like never before.