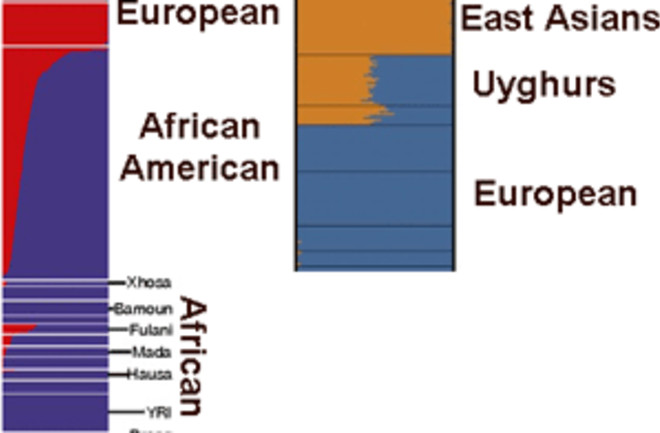 The figure to the left is a composite merged from two different papers. One analyzes the patterns of genetic variation within African Americans, and the other the patterns within the East Turkic ethnic group, the Uyghurs. The bar plots show the ancestral element which is similar to two parent populations which resemble Europeans and Africans or East Asians. Looking at total aggregate ancestral quanta we infer that African Americans are on the order of 15-25% European in ancestry, and 75-85% African. Uyghurs seem to be a composite in even measure of a European-like group, and an East Asian-like group. This makes total sense phenotypically; most African Americans look more African, while Uyghurs seem to exhibit a phenotype on average which spans the middle-range between West and East Eurasians.

But we're clearly missing something when we focus purely on a population level statistic. Each "slice" of the bar plot actually represents an individual. Note the contrast between African Americans and Uyghurs. There is relatively little intra-individual variation among Uyghurs, while there is a great deal of such variation among African Americans. Why? Population geneticists have looked at linkage disequilibrium in both African Americans and Uyghurs, and inferred that the former went through an admixture phase much more recently than the latter. Though you don't really have to be a population geneticist to have known that about African Americans. The ethnogenesis of the group African Americans as a cultural entity occurred in the period between 1650 and 1850. Genetically they are a compound of African, European, to some extent Native American, ancestry. For the Uyghurs we have thinner textual evidence, but the visual and genetic data point to a "western" Indo-European speaking population in the Tarim basin before the arrival of the Turks sometime in the second half of the first millenium A.D. The assumption is that after the initial admixture event and the absorption of the pre-Turkic substrate there was no population substructure. Over time the two components distributed themselves evenly across the population over a period of 1,000-1,500 years.

From this we can infer that patterns of individual variation within populations, as well as between closely related populations, can tell us a great deal. Today the Dodecad Ancestry Project posted a file with the population ancestries broken down by individuals. Looking at this sort of fine-grained data patterns can jump out based on what you already know. Below is a slide show I created which highlights some patterns of interest.

The first slide is confirmation of what we already know, or should expect. The Burusho are a linguistic isolate in the mountains of northern Pakistan. Their lack of inter-individual variation within the population is suggestive of long term isolation, as is common in mountainous regions. The very fact that they speak a linguistic isolate should lead us to expect this, as the flow of culture and genes often correlate. The Sindhi are the dominant Indo-Aryan speaking ethnic group of the lower Indus watershed. Because of their geographic position they have been conquered many times, being under Persian, Arab, and Turkic rule. Genetically they're very similar to the Burusho, but observe that there are two individuals with substantial West African ancestry. The presence of black Africans in the armies of the Muslims who conquered the subcontinent is well known, and the origin of the Indian Siddi community. Some of the Sindhis also have appreciable ancestral components which are probably derived from Muslims from West Asia, the "Southern European" and "Southwest Asian" ancestral element which the Burusho lack.

Next you see a comparison between Assyrians and Armenians. These two groups seem very similar, and both have deep textually attested roots in the Middle East. The Armenians date to the Persian Empire, at least, while the Assyrians are clearly the descendants of the indigenous Semitic population of Mesopotamia before the arrival of the Arabs. In the Muslim period many of them retreated to mountainous areas of northern Iraq, before emigrating to the cities of modern Iraq with the relaxation of their status as marginalized dhimmis. Today the Assyrian community is scattered across the world. The portion which adheres to the Church of the East was nearly totally extirpated from Iraq early in the 20th century, while that which is in union with the Roman Catholic Church, the Chaldeas, is currently leaving Iraq en masse.

But the Armenians are a far different case in terms of their interactions with the rest of the world. They have been present as "middlemen minorities" as far east as Southeast Asia, and north into the Russian Empire, and south into the Muslim world. The most parsimonious explanation for the individuals with Northern European ancestry is that like Kim Kardashian they are products of mixed-marriages, but I wonder if the centuries of the Armenian Diaspora has resulted in a change in the gene frequencies in the Armenian homeland in part because of back-migration. With larger data sets this will be testable, as well as the hypothesis that Diaspora communities are admixed while the Armenians in Armenia proper are not.

The third slide compares Scandinavians, Finns, and Lithuanians. Scandinavia refers to the Germanic speaking lands of Norden. Lithuania has historically been just outside the arc of Nordic influence (in contrast to Estonia and Latvia), so it can serve as a Northern European control. I believe some of the Finnish samples in Dodecad are related, so one shouldn't make too much of them. But, contrast the relatively constant level of Southern European in the Scandinavian samples, and their variance in the Finnish ones. Inversely, the Finns show relative constancy of the "Northeast Asian" proportion, while the Scandinavians vary, with some lacking it. This is likely evidence of recent population exchange, and cultural switching. Finland was under Swedish rule for most of the past 1,000 years, and there still remains a large ethnic Swedish population in Finland, and an ethnic Finnish population in Sweden. Some families in Finland likely switched from Finnish to Swedish to Finnish within the last 500 years. The Southern European and West Asian elements more prominent in the Scandinavians tend to increase as one goes south in Europe, with the former modal in Sardinia (in fact, Sardinians are nearly fixed for the Southern European component), and the latter more prominent among southeast European groups. Geography may then explain why the Lithuanians have similar amounts of the West Asian, but less of the Southern European.

Finally we compare Turks, Greeks, and Cypriots. The historical ethnography strongly implies that the major component of Anatolian Turkish ancestry is Greek and Armenian. A broad similarity to the Greeks here is rather clear (with an elevated West Asian component probably from the Armenian ancestry). But notice the differences. There is a consistent East and Northeast Asian component of ancestry among Turks which is lacking in the Greeks. Since the origin of the Turks is in what would today be termed Greater Mongolia, this makes sense. What surprised me though is the presence of a South Asian component among the Turks. This is where looking at individual level results yields results; I'd assumed that like the Romanians the South Asian element was due to a few assimilated Roma. That seems unlikely now, it's too evenly distributed. So what then? I think here looking at the Uyghur plot illuminates this for us. I don't know what to make of the South Asian component which you can find in the Uyghur, and even to a trace extent, but again consistent, among the Chuvash, who inhabit the South Urals. Some readers have long claimed that some of the West Eurasian Uyghur ancestry was somehow connected to South Asia, and to be honest I've kind of seen that in other HGDP bar plots, but ignored it as of secondary importance. The Turkic group to the north and east of the Uyghurs, the Yakut, totally lack it. From what little we know it seems that the Turks pushed west to Europe, the Middle East, and South Asia, via what is today Xinjiang and Kazakhstan. The existence of this South Asian element in the Turks of Anatolia may be because of their sojourn in this region. There were Iranian speaking Indo-Europeans in Xinjiang, and certainly in Central Asia. Additionally we know historically that northwest India was connected to Xinjiang culturally, as some Indians arrived in China after a period of residence in Xinjiang. But instead of an "Out of South Asia" event I think what we may be looking at is part of the old "Ancient North Indian" genetic variation which pushed into South Asia from the north, and was eventually overlain in Central Asia with other components. I had assumed that the South Asian component among the Finns was noise or Kale, but perhaps it could be that.

Then there is Cyprus. Today the island is ethnically divided between Greek Cypriots and Turkish Cypriots. But in the Bronze Age Cyprus seems to have had a civilization with a close connection with the Near East, in particular Egypt. Sometime between the Bronze Age and the Classical Era it became an outpost of Greece. But notice the near total absence of Northern European among the Cypriots. Like the people of Sardinia, but unlike Sicily, Cyprus is relatively far from the Eurasian mainland. So how did Cyprus become Greek? If the Greeks always had a noticeable Northern European component, or at least during the Bronze Age, that would indicate that the Cypriots are a case of cultural diffusion and emulation of a small Greek elite which arrived during the migrations of the Sea Peoples. Or, the Northern European element could be due to admixture with the Slavic peoples who arrived in Greece after the collapse of East Roman frontier in the 6th century. Or it could be a combination of both. In any case, the Cypriots look most like the Syrians genetically, though the Syrians seem to have a lot more trace exogenous components.

There's a lot more one could say. I invite readers to download the RAR file with the bar plots. I will leave you with one last comparison, without comment: