What if We Discovered an Alien Civilization Less Advanced Than Our Own? 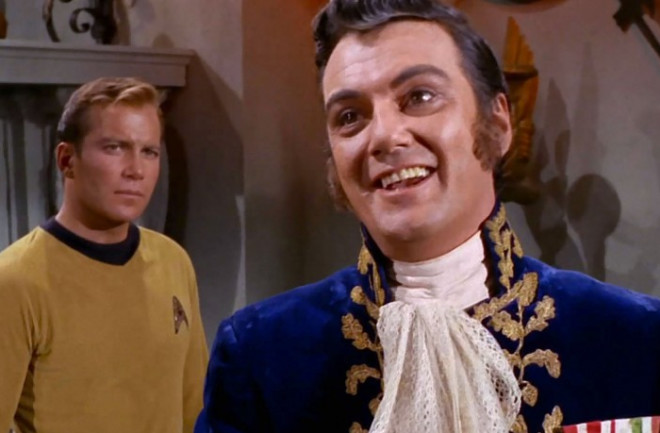 Never mind Star Trek's Squire of Gothos; what if we really found an alien civilization at a 16th-century level of technological development? How would we know? How could we make contact--and should we? (Credit: Paramount)

Readers of this blog know that I’m a big fan of Quora, because it lets non-experts raise the kinds of speculative questions that don’t normally come up in formal scientific discussions. One frequent theme that comes up is the issue of what we would do if we found intelligent life on a planet around another star. A recent posting in particular caught my eye: “What would we do if we found an Earthlike planet with intelligent life that is 500 years behind us in technology and advancements?”

Well, that’s a fun thought experiment! It’s not one question, really, but a whole set of nested questions about how to find alien life, how to determine the presence of alien intelligence, how to determine the nature of that intelligence, and then how we would study it, or even try to make contact with it. There’s a big moral issue at the end, but a lot of juicy scientific ones along the way. And that got me thinking…

First, how will we find a truly Earthlike planet?

Despite all the amazing recent discoveries of planets around other stars, astronomers have yet to find a true Earth twin — that is, an Earth-size planet orbiting a sunlike yellow star at an Earthlike distance. The closest they’ve come is a planet called Kepler 452b. It’s roughly five times the mass of Earth and probably belongs to the class of planets called super-Earths. Habitable, maybe; Earthlike, no. The same goes, even more so, for the recently discovered Earth-size planets around the star Trappist-1. These are extremely exciting worlds to study, and it is possible that some of them could support life. But the Trappist-1 planets orbit a dim red-dwarf star, which means that they are blasted with energetic radiation and are probably tidally locked, with one hemisphere always facing toward the star.

Closer analogs are surely out there, but they are hard to find. NASA’s Kepler space telescope spots planets by the way they blot out a tiny bit of their star’s light when they transit: that is, they pass between the star and us. But for a planet in a one-year orbit (like ours!), that means you see a shadow only once a year, and very briefly. To confirm that the planet is real — and not, say, a random flickering of the star — you want to observe at least three events. So you need to watch a lot of stars, and watch them all for several years. Even then, the only planets you’ll find are the ones that happen to be lined up exactly between us and their star.

Planets in the habitable zones around other stars may not be anything like our own. Kepler-186 (top) is a miniature system similar to Trappist-1. Kepler-452 (middle) is a sunlike star but its key planet is bigger and more massive than Earth. (Credit: NASA/JPL-CalTech/R. Hurt)

Second, how would we know if a superficially Earthlike planet is truly habitable?

The leading method right now is to look at light streaming through the planet’s atmosphere when it passes between us and the star. That’s an extremely difficult task even for giant planets. Right now, we don’t have the technology to do it for a true Earth twin — if we even had one to study. Another approach is to search directly for other Earths alongside their stars, and then analyze their light. To do that, you need both a very powerful telescope and a highly effective way to block out the glare of the star, since an Earthlike planet would be right alongside it in the sky, but on the order of a billion times fainter!

Astronomers have some clever ideas about how to do that, using either an external light blocker (called a starshade) flying in front of a space telescope, or an internal device (coronagraph) built into the telescope itself to create a kind of artificial eclipse. The upcoming WFIRST telescope will test the coronagraph concept, but it won’t be sensitive enough to observe other Earths. That will take improved telescopes that are unlikely to be built at least until the 2030s.

Bringing other Earths into view won't be easy. This is the plan for NASA's upcoming WFIRST space telescope and its starlight-blocking coronagraph. (Credit: NASA-JPL/G. Blackwood/Noecker et al)

Third, how would we know if there’s intelligent life on the planet?

Proving the presence of any kind of life will be hugely challenging, even after we get past steps one and two above. Astronomers will analyze the atmospheres of the planets looking for “biosignatures”–unusual, out-of-balance chemical compositions such as those associated with life on Earth (eg, free oxygen plus methane). SETI searches focus on possible signals sent by alien civilizations, but aliens with 16th-century technology won’t be beaming us any radio messages. We’d have to find them in more subtle ways. For instance, we might detect heavy-metal signatures associated with smelting and other types of simple industry, although that still would not yield unambiguous proof. Some extreme, speculative types of lensing telescopes might be powerful enough to see evidence of cities or geometric clearing of forests; such observations would certainly be a lot more convincing.

Note, by the way, that it would be extremely unlikely to find an alien civilization that is so close to us in technological development, even if intelligent alien life is fairly common. Stars and planets have most likely been forming in our galaxy for more than 10 billion years. Maybe it’s normal for it to take 4 billion years for intelligent life to emerge; maybe not. Regardless, life on other worlds could have begun billions of years earlier or later than life on Earth. Out of that vast range, the odds that an alien civilization would be within 500 years of our stage of development are millions to one — and that assumes that other planets follow the same path as ours, which is a huge leap of faith. But let’s keep digging into the question.

How to launch an interstellar probe using a laser lightsail. The tech doesn't exist yet, but it's all near-term realistic. (Credit: Breakthrough Starshot)

Fourth, what would we do if we really found rock-solid evidence of a pre-industrial civilization on a planet around another star?

We couldn’t communicate with them by any currently known method. Unless physicists make some kind of wildly unanticipated new discovery, there is no practical way that humans could travel there, either. Potentially we could send miniature interstellar probes to examine the planet and learn more about its inhabitants. A project called Breakthrough Starshot is exploring the kind of technology needed to do something like that. Such probes would be so small and speedy that the aliens there would have no idea they were being watched.

Assume a best-case scenario (because, why not?). Sometime next decade we find a potentially Earthlike planet around Alpha Centauri A, the closest sunlike star, or maybe we find encouraging information about the Earth-size planet orbiting its companion star, the red dwarf Proxima Centauri. In the 2030s we find plausible biosignatures on one of these nearby exoplanets. In the 2050s we image the planet and see plausible indications of an intelligent civilization. What a moment of discovery that would be! We launch interstellar probes there, which arrive in the 2090s. By 2100, we’re convinced not only that the planet is inhabited, but that it is home to an advanced, semi-industrial civilization. So now what?

NASA will crash Cassini into Saturn in September, to make sure the probe doesn't contaminate one of the planet's potentially habitable moons. This kind of caution should extend to any future contact with sentient alien beings. (Credit: NASA-JPL)

That brings us to the fifth and final part.

Potentially we could use interstellar probes to drop coded messages all over the planet. Maybe the inhabitants could respond by setting huge geometric fires that we could observe from space. We would have a lot of time to think about whether making contact is a good idea and, if so, how best to do it. Each back-and-forth message would take about 9 years — and remember, this is for the very nearest star. Suppose we found a civilization on Kepler 452b. It is 1,400 light years away. Each round-trip message would take 2,800 years minimum. A Starshot-style probe would take at least 7,000 years to get there.

But let’s take all of the what-ifs all the way. What if we find this quasi-technological alien civilization, and what if humans develop some kind of faster-than-light technology (currently thought to be physically impossible, but we’re speculating here) so that we could jump in a ship and go visit, Star Trek style? How would we behave?