What Does Absolute Zero Mean?

It's the absolute nadir of our universe's thermometer. And it gets pretty weird down there. 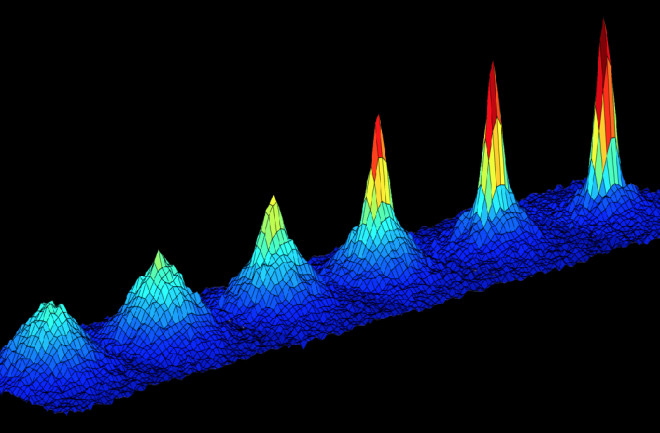 Bose-Einstein Condensate (BEC), a fifth state of matter, consists of atoms so cold, they condense into a quantum state, acting as one. Here, a graph shows atoms' density increasing as they get colder, eventually forming BEC. (Credit: NASA/JPL-Caltech)

Temperature tends to be relative — the air is below freezing, her fever is above normal. But scientists probe the extreme ends of the spectrum of what’s called absolute temperature: At the upper limit, absolute hot is a theoretical furnace where the laws of physics melt away. On the flip side, absolute zero — cold so cold there’s nowhere to go but up — is almost within scientists’ grasp.

To understand it, you first need some Physics 101. The atoms that make up matter are always moving. Temperature measures those atoms’ kinetic energy, or energy of motion. The faster they move, the higher their temperature. Absolute zero, though, is almost perfect stillness.

Nothing in the universe — or in a lab — has ever reached absolute zero as far as we know. Even space has a background temperature of 2.7 kelvins. But we do now have a precise number for it: -459.67 Fahrenheit, or -273.15 degrees Celsius, both of which equal 0 kelvin.

Different materials vary in how cold they can get, and theory suggests we’ll never get to absolute zero. But with an arsenal of new tools and techniques, scientists inch ever closer to reaching that rock bottom.

Why It Matters: Superfluids and Other Material Gains

The Coldest Natural Place in the Universe

Although temperatures plummet on the dark side of the moon and the shadowy craters of Pluto, those locales look balmy compared with the Boomerang Nebula. About 5,000 light-years away, this star system is just 1 kelvin above absolute zero.

Although temperatures plummet on the dark side of the moon and the shadowy craters of Pluto, those locales look balmy compared with the Boomerang Nebula. About 5,000 light-years away, this star system is just 1 kelvin above absolute zero. (Credit: R. Sahai and J. Trauger (JPL), NASA/ESA)

How to Get There: Let Lasers Be Your Guide

To sneak up on absolute zero, scientists have used vacuums and lasers in elaborate experiments to cool atoms of a gas. A vacuum can cool a gas without condensing it into a liquid or solid — as would normally happen — but its atoms still move. That’s where lasers come in.

In order to chill an atom, a series of lasers intersect to slow its momentum. (Credit: Laboratoire Kastler Brossel)

When an atom absorbs a light particle, or photon, from a laser, it emits another photon. When physicists tune the lasers in just the right way, an atom traveling in one direction absorbs one photon and then emits another in a different direction and at a higher energy. The atom will then slow down, photon by photon. By catching an atom in the crosshairs of multiple lasers, researchers can decrease its momentum from every direction. This technique, first used in the 1970s, is called laser cooling.

But there’s a way to go even lower. A technique called evaporative cooling siphons off a gas’ highest-energy atoms — like soup cooling by releasing heat as steam. By combining lasers and evaporative cooling in new ways, scientists have chilled gases to about 50 trillionths above 0 kelvin. It’s not zero, but it’s close.

Race to the Bottom

1926: Chemists first describe a method, called adiabatic demagnetization, that uses magnetic fields to cool materials below 1 kelvin. In 1933, scientists employ it to chill a salt to 0.25 kelvin. That’s low, but not as low as laser cooling can go.

2015: Stanford University researchers chill a gas made of rubidium — a soft metal used to make solar cells — to 50 trillionths of a degree above absolute zero, setting a new record.

2017: Physicists at the National Institute of Standards and Technology in Boulder, Colorado, chill an aluminum membrane to 0.00036 kelvin, lower than theory predicted possible for the material. The experiment suggests a way to see quantum effects, like a single object coexisting in two places at once.