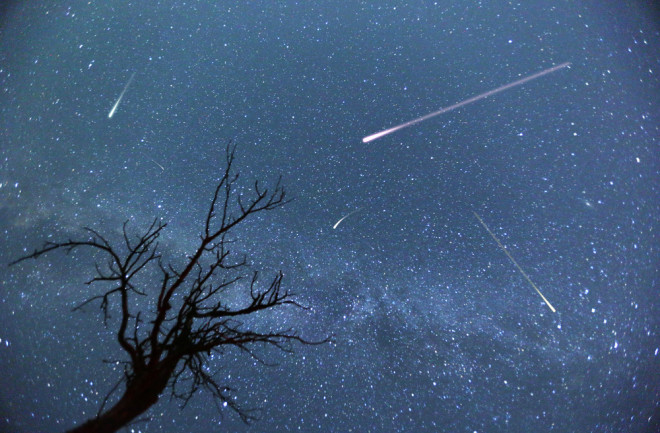 (Credit: Cylonphoto/Shutterstock) When a meteor screams through our upper atmosphere, it's a silent show for us here on the ground. Most meteors burn up dozens of miles above the surface, and even if a sonic boom reaches us it comes minutes after the visual spectacle. However, reports of meteors have for years been accompanied by reports of strange sizzling sounds filling the air, as if someone was frying bacon. Sound travels too slowly for the meteor to be directly responsible for the phenomenon, so such reports are usually dismissed or attributed to earthly causes. But now, researchers from Sandia National Laboratories and the Czech Academy of Sciences (CAS) say that they have uncovered a mechanism that could account for the mysterious crackling noises.

The sounds, they say, emanate not from the disturbance of air particles as the meteor shoves them aside, but from the flashes of heat it gives off as it burns up. Meteors can burn as hot as the sun, and the conflagration gives off so much energy that it can reach all the way to the ground in the form of electromagnetic energy — what's known as radiative heating. When certain objects absorb the pulses of energy, they heat up and expand quickly, disturbing the surrounding air and creating the crackling sounds. The researchers tested their idea in an anechoic chamber — which blocks all external sounds — using an LED light and a microphone. When they aimed the light variety of objects, including wood, paint, felt and a wig they picked up the same sounds described by meteor observers — pops, hisses and rustling noises. By flashing the light at a frequency of 1,000 Hz, they generated sounds at 25 decibels—loud enough to be audible by humans. The test confirmed their hypothesis: Meteors may be transmitting heat all the way from the upper atmosphere to objects on the ground in sufficient quantities to make them sing. They published their work this month in Nature Scientific Reports. This phenomenon is known as the photoacoustic effect, and was first noticed all the way back in 1880 by Alexander Graham Bell, who found that rapidly interrupting a beam of sunlight with a slotted wheel would cause certain objects to emit sounds. The effect occurs when rapid pulses of energy heat up an object and jostle the air particles surrounding it. The moving air particles can then be detected as sound waves.

When most meteors turn into fireballs it's not as a steady burn but a series of high-speed flickers. These spikes last only for a millisecond or so and go by too quickly for us to notice. A series of observations with high-speed photometers by the Czech Fireball Network, run by the Astronomical Institute at CAS, tracked the light curve of over 100 fireballs, and found that what appears to us as a steady flame is actually a series of spikes and dips. These pulses are similar to the flashes of light created by Bell in his experiment and are likely sufficiently powerful to excite the molecules of certain objects here on Earth. They found that materials that both absorb light quickly and don't conduct heat well produced the sounds the best. This includes dark clothing and hair, leaves and grass; objects which match up to anecdotal accounts of the sizzling sounds. Their model suggests that meteors that appear at least as bright as the moon should be able to produce an audible photoacoustic effect as long as their pulses match up to frequencies that our ears can pick up. So, if you're lucky enough to spot a meteor, listen closely; it might be talking to you.