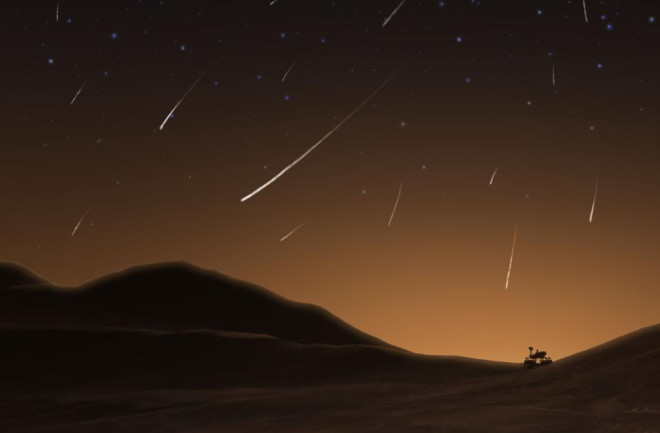 An artist's concept of a meteor shower, as seen on Mars. (Credit: NASA/JPL-Caltech) The Mars-like deserts of the American Southwest are some of Earth’s most iconic stargazing grounds. Far from pestering city lights and free from regular cloud cover, they provide a starry-skied sanctuary for lovers of the night. So, it would stand to reason that the deserts of Mars itself would be even more idyllic. After all, there’s no light pollution and cloud cover is hard to come by. And to some degree, that’s true. It doesn’t get much darker than nighttime on the Red Planet. And Mars’ atmosphere is so weak — just one percent of Earth’s — that the stars don’t twinkle.

But the Red Planet provides another complication: dust. Even straight overhead at zenith — the region where atmospheric interference is the least — the dust decreases a star’s brightness by one whole magnitude. That gets drastically worse toward the horizon, where dust can dim stars by as much as 4 magnitudes. Astronomers know this from watching the night sky with the Mars rovers, which have cameras about as sensitive as the unaided human eye. When the sky is perfectly clear, NASA’s Opportunity rover can just make out magnitude 6 stars — generally considered the limit for human viewing.

Astronomers have turned those rover eyes toward the heavens to watch lunar eclipses and comet flybys. In 2014, NASA’s Curiosity rover caught Comet Siding Spring (C/2013 A1) as it buzzed Mars at a distance of just 87,000 miles. That’s 10 times closer than the famous Comet Hyakutake (C/1996 B2) that squeaked passed Earth back in 1996. It even messed with Mars’ magnetic field. NASA’s Maven orbiter shows that the more dramatic result was a meteor shower that peaked at thousands per hour, or maybe even tens of thousands. That’s more dramatic than anything in recorded history on Earth. But the dust would have obscured many of those.

Sunsets Worth a Visit

And for human eyes, there are other factors than dust. On Mars, it also takes longer for night to settle in. The Red Planet can have absurdly long twilights that last for hours. That messes with nighttime observing, but makes for stunning sunsets, which can shift from blue into shades of butterscotch as evening emerges. As darkness finally settles in — if you weren’t too scared of Mission to Mars-style killer aliens to head outside — another strange spectacle would await.

An illustration comparing Mars' moons to Earth's moon. (Credit: NASA/JPL-Caltech/Malin Space Science Systems/Texas A&M University) When they’re not hidden by dust, the Red Planet’s two moons, Phobos and Deimos, are both visible from the surface. And as your evening butterscotch skies faded to black, you could watch the cratered and potato-shaped Phobos — the larger of the two — rise from the west and then change phases from crescent to gibbous over the course of just four hours before it set again. You could watch it rise and set multiple times in one night. Deimos would look like the brightest star in the sky. You could also spy some earthly deep-sky observing favorites like the Orion Nebula and the Andromeda Galaxy. That sounds like it would be worth braving temperatures below -100 degrees Fahrenheit.