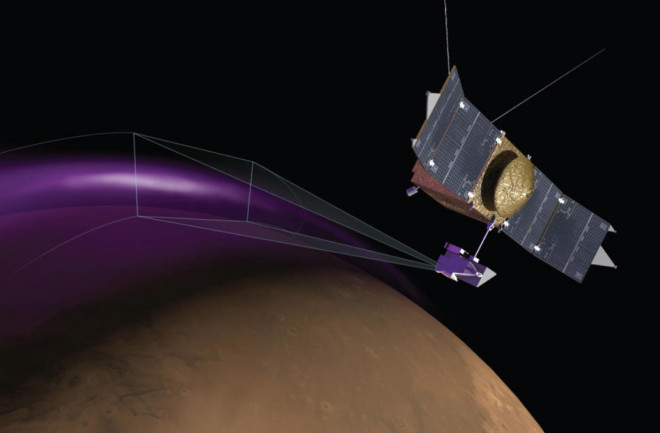 Witnessing an aurora first-hand is a truly awe-inspiring experience. The natural beauty of the northern or southern lights captures the public imagination unlike any other aspect of space weather. But auroras aren’t unique to Earth and can be seen on several other planets in our solar system.

An aurora is the impressive end result of a series of events that starts at the sun. The sun constantly emits a stream of charged particles known as the solar wind into the depths of the solar system. When these particles reach a planet, such as Earth, they interact with the magnetic field surrounding it (the magnetosphere), compressing the field into a teardrop shape and transferring energy to it.

Because of the way the lines of a magnetic field can change, the charged particles inside the magnetosphere can then be accelerated into the upper atmosphere. Here they collide with molecules such as nitrogen and oxygen, giving off energy in the form of light. This creates a ribbon of color that can be seen across the sky close to the planet’s magnetic north and south poles – this is the aurora.

Using measurements from spacecraft, such as Cassini, or images from telescopes, such as the Hubble Space Telescope, space physicists have been able to verify that some of our closest neighbors have their own auroras. Scientists do this by studying the electromagnetic radiation received from the planets, and certain wavelength emissions are good indicators of the presence of auroras.

Each of the gas giants (Jupiter, Saturn, Uranus, and Neptune) has a strong magnetic field, a dense atmosphere and, as a result, its own aurora. The exact nature of these auroras is slightly different from Earth’s, since their atmospheres and magnetospheres are different. The colors, for example, depend on the gases in the planet’s atmosphere. But the fundamental idea behind the auroras is the same.

For example, several of Jupiter’s moons, including Io, Ganymede and Europa, affect the blue aurora created by the solar wind. Io, which is just a little larger than our own moon, is volcanic and spews out vast amounts of charged particles into Jupiter’s magnetosphere, producing large electrical currents and bright ultraviolet (UV) aurora.

On Saturn, the strongest auroras are in the UV and infrared bands of the color spectrum and so would not be visible to the human eye. But weaker (and rarer) pink and purple auroras have also been spotted.

Mercury also has a magnetosphere and so we might expect aurora there too. Unfortunately, Mercury is too small and too close to the sun for it to retain an atmosphere, meaning the planet doesn’t have any molecules for the solar wind to excite and that means no auroras.

On Venus and Mars, the story is different. While neither of these planets has a large-scale magnetic field, both have an atmosphere. As the solar wind interacts with the Venusian ionosphere (the layer of the atmosphere with the most charged particles), it actually creates or induces a magnetic field. Using data from the Venus Express spacecraft, scientists found that this magnetic field stretches out away from the sun to form a “magnetotail” that redirects accelerated particles into the atmosphere and forms an aurora.

Mars’s atmosphere is too thin for a similar process to occur there, but it still has aurora created by localized magnetic fields embedded in the planet’s crust. These are the remnants of a much larger, global magnetic field that disappeared as the planet’s core cooled. Interaction between the solar wind and the Martian atmosphere generates “discrete” auroras that are confined to the regions of crustal field.

A recent discovery by the MAVEN mission showed that Mars also has much larger auroras spread across the northern hemisphere, and probably the whole planet too. This “diffuse” aurora is the result of solar energetic particles raining into the Martian atmosphere, rather than particles from the solar wind interacting with a magnetic field.

If an astronaut were to stand on the surface of Mars, they might still see an aurora but it would likely be rather faint and blue, and, unlike on Earth, not be necessarily near the planet’s pole.

Most planets outside our solar system are too dim compared to their parent star for us to see if they have auroras. But scientists recently discovered a brown dwarf (an object bigger than a planet but not big enough to burn like a star) 18 light years from Earth that is believed to have a bright red aurora. This raises the possibility of discovering other exoplanets with atmospheres and magnetic fields that have their own auroras.

Such discoveries are exciting and beautiful, but they are also scientifically useful. Investigating auroras gives scientists tantalizing clues about a planet’s magnetic and particle environment and could further our understanding of how charged particles and magnetic fields interact. This could even unlock the answers to other physics problems, such as nuclear fusion.