Welcome to Boca Chica, the Tiny Texas Town Where SpaceX is Building its Starship

A tiny community on Texas' southernmost tip has become a prime destination for the spaceflight faithful. 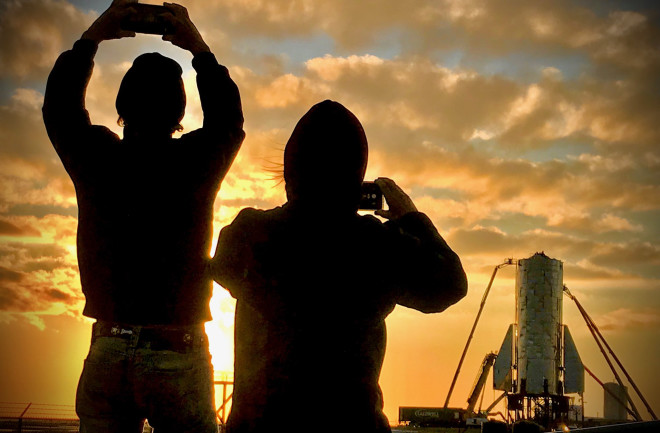 The last thing the residents of Boca Chica expected were the spaceships. Hurricanes, yes. Border walls, maybe. But the gleaming metal rockets that began hurling themselves into the sky atop pillars of flame were unexpected, to say the least.

When Elon Musk announced that his aerospace company, SpaceX, was considering the small coastal village as a potential location for their facilities in 2013, Boca Chica was a sleepy backwater at Texas’ southern tip. Today, an interplanetary spaceship is being built just down the road.

And, along with SpaceX came a glut of aerospace geeks, rocket enthusiasts and SpaceX fans. Some drive from Brownsville, the nearest city up the coast, or farther afield, while legions more tune in to the round-the-clock webcams broadcasting the company’s actions. To support our burgeoning obsession with the minutiae of spaceflight, a cottage industry of homegrown SpaceX observers has sprung up in this retirement paradise. They’re drawn by a simple, shared mission: to watch the future unfold.

Austin Barnard, a college sophomore in Brownsville, drives the 45 minutes to the SpaceX facilities multiple times a week. He regularly posts photos from Boca Chica to his more than 11,000 Twitter followers, informing the world about the progress of a future interplanetary spaceship.

Bernard hasn’t always been a SpaceX “fanboy,” as he calls himself. He stumbled upon SpaceX videos online after a rough time in his life, and his Boca Chica observations soon followed.

Starship and Starhopper seen from across the water in Boca Chica. (Credit: Austin Barnard)

Barnard began driving to the SpaceX facility with his phone after a few friends told him there was something going on there. He posted a few pictures to Twitter, and soon had thousands of SpaceX fans following him.

He now runs one of the most prominent Twitter accounts documenting events in Boca Chica. His Twitter account even landed him some one-on-one time with Musk at the latest Starship update.

A perennial favorite is SpaceX’s biggest, shiniest craft to date: Starship. First announced in 2017 as the BFR, or Big Falcon Rocket, it may be the rocket that will eventually take humans to Mars. Sleek illustrations show the rocket landing vertically on the Red Planet, off-planet colonies agleam in the distance.

The futuristic craft has begun to take shape only recently, though. For a long time, Barnard was posting pictures of what looked like a big metal silo in the middle of nowhere.

An up-close glimpse of the construction for Starship (left), with the test vehicle, Starhopper, directly next to it. (Credit: Austin Barnard)

For Rachel Gore, the excitement began when she found out SpaceX had chosen Boca Chica as a launch facility. Gore, an administrator for the tourist website SPadre.com, already had webcams set up for locals and tourists to monitor surf and fishing conditions. Now, the site has a dedicated webcam focused on developments in Boca Chica to cater to those visiting with interstellar dreams.

“Obviously, SpaceX is the biggest thing to ever come to the area and the addition of space tourism is going to be great for the island economy,” Gore said.

The spaceport under construction in Boca Chica in January 2019. (Credit: IrinaK/Shutterstock)

In addition to the webcams, Gore makes the trip out to the SpaceX facilities several times a week with her husband, Gene. She’s especially attentive when things are progressing quickly, like when Starship was transported to the launch site in in preparation for testing.

Their photos and updates end up on the SPadre.com-affiliated Twitter account, where they stir excitement among the SpaceX faithful. The webcam was extremely popular on the day that the lower and upper sections of the Starship prototype were welded together. Thousands of fans watched as the spaceship’s body took shape.

It’s evident on Twitter that there’s a bond between the SpaceX watchers in Boca Chica. People retweet photos and alert each other if they notice any additions to the spacecraft. Some of them run into each other at the SpaceX site.

“They’re basically my alarm clock,” Barnard says of his followers. Many of them keep their eyes on the live webcams, including SPadre.com’s, and try to alert Barnard if something major is happening on the grounds.

Gore also says she’s become familiar with many of her fellow SpaceX fans.

“We have become close friends with many of the supporters and enjoy hanging out and sharing in the excitement,” said Gore. “We really enjoy all of the conversations and support we have had from SpaceX followers, both in person and on social media.”

Barnard often sees tourists around Boca Chica, including fans from abroad. Not satisfied with a webcam, international fans have begun traveling to this tiny Texas town to see the beginning stages of SpaceX’s flagship rocket for themselves. But their access may soon be limited.

The Future of Boca Chica

While SpaceX’s arrival in Boca Chica brings tantalizing possibilities for the private spaceflight industry, it’s thrown the town’s own future into jeopardy. Rocket launches are inherently dangerous, and as Musk’s ambitions put more and more rockets into the air, it could threaten the safety of the residents of Boca Chica. The SpaceX CEO offered a solution recently, though not all the residents are happy about it.

"Probably, over time, [it’s] better to buy out the village and we’ve made an offer to that effect,” Musk said during a press briefing in September.

Each resident of Boca Chica received a private buyout offer in the mail, according to Business Insider. But a buyout could mean residents would be forced to leave their homes. Homeowners were offered up to three times their property value and VIP viewing for future launches on the Texas coast. Some residents told Business Insider they’ll take the offer; others are fighting it.

Not only will this affect those living in the town, but Barnard says it will make it more difficult for him and fellow SpaceX watchers to view launches. They may have to move to South Padre Island, more than twice as far away from the launch pad as Boca Chica.

But even if they do, Barnard, Gore and their fellow SpaceX faithful will still be on the front lines of the modern-day space race. What’s more, they’ll be sharing it with all of us, allowing space enthusiasts the world over to join in the excitement. One day, they may even be showing us the first human mission to Mars.