We Told You Chicks Are Good at Math: They Count, Add, and Subtract 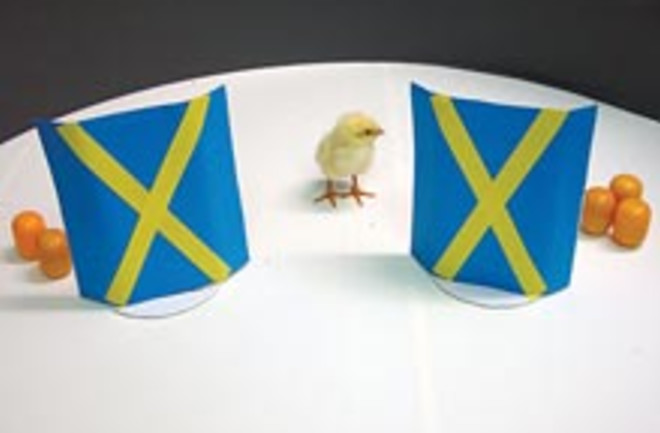 Young chickens just a few days old can count and perform basic arithmetic, according to a fluffy new study. Researchers manipulated objects that the chicks had formed an attachment to, moving the objects behind little screens, and found that the observant young birds kept track of where the objects were. In effect, the chicks were solving simple math problems like "4 – 2 = 2." While some adult animals, including primates and dogs, have been found to have an understanding of basic math, researchers had not previously demonstrated numerical abilities in any young animals (except for humans). Karen Wynn,

who has reported evidence of numerical skills in human babies, points out that the chicks haven’t had a chance to learn or develop much. “This work, then, is a compelling existence proof that numerical understanding comprises a built-in system of unlearned knowledge,” Wynn says [Science News].

To conduct the experiment, lead researcher Rosa Rugani relied on two chick behaviors. First, she used imprinting, or the fact that chicks

always try to stay close to objects they are reared with - just as they stay close to and follow their mother as soon as they hatch [BBC News].

When the experimental chicks first hatched, researchers put little yellow balls (actually the plastic containers that are found inside Kinder eggs) in their cage.

“They treat the balls as companions,” Rugani says [Science News].

Next, they exploited the chicks' tendency to to flock together: A solitary chick will typically rush to join the largest group of chickens it can find. In the experiment, the researchers put two yellow balls behind one screen and three balls behind another screen as an enclosed chick looked on. When the chick was released from its enclosure, it zoomed to the screen with three balls. The study, which will be published in the Proceedings of the Royal Society B, then pushed the chicks one step farther, and tested their ability to do basic arithmetic. For example, researchers piled four balls behind one screen and two balls behind the other, and then moved two balls from one pile to the other. The birds, Rugani says,

were able to "count" the balls that were moved to work out which screen hid the larger set at the end of the transfer. "They still chose correctly - adding up the numbers based on groups of objects they couldn't see at that moment" [BBC News].

Related Content: 80beats: Honeybees See the Difference Between Numbers—Literally 80beats: One Giant Leap for Birdkind: A Magpie Looks in the Mirror and Recognizes Itself