We Have Agents In The Field 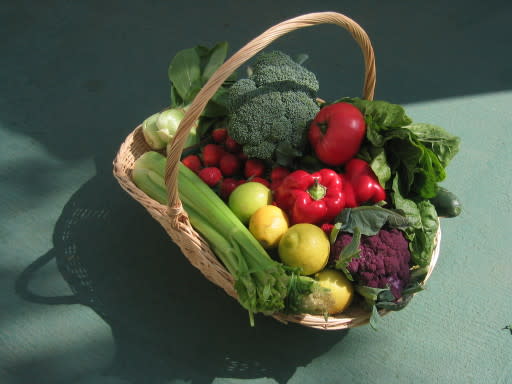 (1) So on my wanderings through the Hollywood Farmer's market yesterday (see right an earlier picture of the sort of loot you can get there), I decided to stop at my favourite tamale stand for lunch. While eating the tamale sitting on the curb, I met a very interesting person, Ysanne Spevack, (who was also sitting on the curb, chowing down on some excellent jerk chicken and fried plantains from the stand opposite) who's an expert on the organic food industry, a mine of information about it and generally fun to talk to. See the amazing website that she edits and helps write, or her eight books, for more information about organic food. Excellent! (2) Well, curbside eating turned into tea in a nearby cafe to talk further (it's not often someone actually wants to [strike][join me in][/strike] listen to me droning on and on and on about public transport and bikes, gardening and drought-tolerant plant varieties, etc) and then we were joined by a friend of hers. Turns out she's a model. The reason that is interesting is because she's actually trained as a scientist and engineer, did research in medical imaging at UCSF for a while before moving into modelling. She says that there are others (Physicists and the like) in the industry too (not necessarily modelling, but....). I like the idea of this. Recall my oft-repeated-on-this-blog quest for better public understanding of science, and more familiarity with scientists and science on the part of the "person on the street" (as a means to the former) (see e.g., here and here). Well, the idea that there's a secret underground of scientists infiltrating various jobs that we're not expected to occupy is an excellent one! (Will work it into that novel/screenplay/whatever that I'll try to get around to writing one day.) Scientist sleeper-cells. Hiding in plain sight as models, supermodels, actors and actresses, hollywood superstars, leaders of European countries (oh, wait, that one's true right now - see Germany), TV chat-show hosts, game-show hosts, rappers, basketball players, etc. This idea could have legs.... -cvj P.S. Some of this happens more often than you think. I of course thought of the German Chancellor, Angela Merkel, who is/was a physicist. There are a number of examples of rock stars who were scientists, and there's my new friend who's a model and former research scientist. Oh, and I just remembered Danica McKellar, who's done some fine work in mathematics at UCLA, and is also an actress, as NPR keeps reminding us (good lord, do you remember Winnie Cooper on The Wonder Years, way back in the late 80s and early 90s? That was her......how about that. My, how time flies....). I'm sure you can do way better than me with other examples of this less-celebrated-but-really-important sort. The best examples will be ones that combine going far with their science (beyond undergraduate, say...) with a profession where scientists are not expected to be showing up a lot. So a phd mathematician working in insurance is not going to blow my skirt up, but if Heidi Klum, Tyson Beckford, or Michael Bergin turn out to have a background in research into molecular biology, or fusion, or flag manifolds, then we should be jumping up and down about this! Bring on those examples!