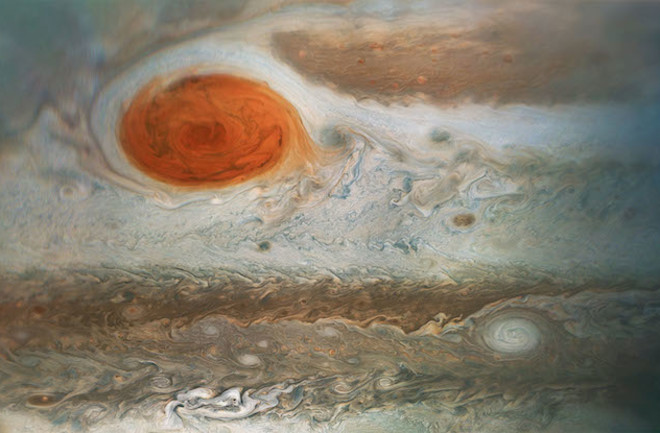 (Credit: NASA/JPL-Caltech/SwRI/MSSS/ Gerald Eichstädt /Seán Doran) Jupiter is without a doubt inhospitable, but it does have one thing going for it — increasing evidence that it’s rich in water. Astrophysicist Gordon L. Bjoraker of NASA's Goddard Space Flight Center recently published a paper in the Astronomical Journal, outlining how he and his team of researchers detected signatures of water emitting from Jupiter’s Great Red Spot. By studying the giant storm with ground-based telescopes, they were able to observe molecular hydrogen and oxygen at infrared wavelengths, backing up theories that Jupiter could actually be abundant in water.

Water probably isn’t the first thing that comes to mind when you think of the enormous gas giant, but it isn’t all that unfathomable if you think about. Back in 1973, the Pioneer spacecraft swung by Jupiter and detected a magnetic field with features similar to Earth’s, leading researchers to wonder if the gaseous planet had a core, and if so, what was it made out of. Follow-up spacecraft have since detected chemical elements that indicate Jupiter's core could be 10 times the mass of Earth, and made up of rocky material and water ice. We’ve also witnessed strong thunder and lightning coming from Jovian clouds, which, as far as we know, only occurs in the presence of moisture. "The moons that orbit Jupiter are mostly water ice, so the whole neighborhood has plenty of water," said Bjoraker in a press release. "Why wouldn't the planet - which is this huge gravity well, where everything falls into it - be water rich, too?" Researchers believe that the Great Red Spot, which stretches about 10,000 miles (16,000 kilometers) in diameter and extends 200 miles (300 kilometers) into Jupiter’s atmosphere, is composed of three layers of clouds. It has a top layer that’s made up of ammonia, a middle layer that’s a mix of ammonia and sulfur, and a third layer that houses water ice and liquid water. To find evidence of this theory, Bjoraker and his team of researchers used data from the W.M. Keck Observatory’s high-powered infrared spectrometer, as well as the IShell 1.1-5.3 micron spectrograph at the NASA Infrared Telescope Facility. Combined, these two instruments were able to probe the storm and detect light at infrared wavelengths, revealing which chemical elements were protruding through its clouds.

Taken by Juno during one of its fly-bys in 2017, this color enhanced image shows a close-up of the massive storm. (Credit: NASA/JPL-Caltech/SwRI/MSSS/Gerald Eichstad) Not only did they find signatures of ammonia, sulfur, hydrogen and oxygen, but they also detected methane gas, which they used to study where exactly the clouds lie in the atmosphere. Since it doesn’t get cold enough on Jupiter for methane gas to freeze, it doesn’t get a chance to accumulate in mass amounts, making its abundance more or less the same throughout the planet. "If you see that the strength of methane lines vary from inside to outside of the Great Red Spot, it's not because there's more methane here than there," said Bjoraker, "it's because there are thicker, deep clouds that are blocking the radiation in the Great Red Spot."

By comparing the amount of methane emitting from the Great Red Spot to other areas of the planet, the team was able to determine that the lowest clouds sit just above the point where water freezes in the atmosphere — suggesting that water-rich, vaporous clouds begin forming as soon as the temperature allows them to. Based on the location of the deepest cloud layer, and successfully finding the predicted elements in the Great Red Spot, the team is confident that they found water-rich clouds, and that water on Jupiter could actually be quite plentiful. Of course, the exact amount of water lurking in Jupiter’s atmosphere, and in its hypothetical core, is unknown. But thankfully, we have NASA’s Juno spacecraft to help us find out. Orbiting Jupiter since July 2016, the craft is using its infrared spectrometer and microwave radiometer to search for signs of water and its abundances. And since Juno is able to peer deeper into the storm than any other craft, the researchers are hoping that it will deliver similar results. Finding out how much water Jupiter holds will not only give clues to its mysterious composition, but will also help us understand the early years of our solar system, when turbulent planet formation was just beginning.