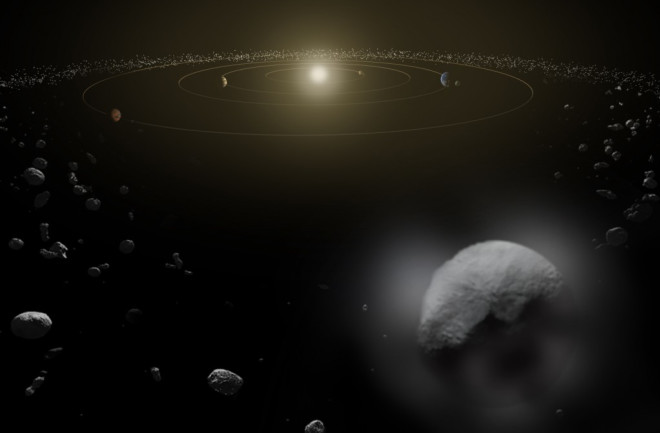 An illustration of Ceres. Credit: ESA/ATG medialab Looking for water is a pretty big deal on Earth, and an even bigger deal elsewhere. The chemical is not only vital to sustaining life as we know it, but it’s also an important clue that can reveal secrets about an object’s past. Astronomers had long been looking for it in one particular place, the asteroid belt between Mars’ and Jupiter’s orbits, and it looks like they finally found it — on Ceres, one of the belt’s most enigmatic bodies.

Ceres has been in the news, off and on, ever since its discovery in 1801. Initially considered a whole new planet, it was later demoted (just like Pluto) to dwarf planet status because it turned out to be just one of many similarly tiny objects named asteroids. About the size of Texas, and dwarfed by our moon (and by Pluto), Ceres is still a pretty big deal: it contains about a quarter of all the mass in the asteroid belt. Astronomers had found evidence suggesting Ceres had water before, and they’d long suspected it was made up of an icy mantle surrounding a rocky core. But a paper in today’s Nature shows conclusively, for the first time, actual observations of water on the dwarf planet. Specifically, the authors using the European Space Agency’s Herschel Space Observatory detected two sources of water vapor spewing about 6 kilograms of water into space per second. Since there are two sources, that indicates that the presence of water is a more permanent phenomenon, and not just the temporary result of something like a recent impact with an icy body.

The authors suggest that the water vapor could have two causes: the direct sublimation of exposed water ice into vapor, similar to a comet’s behavior; or cryo-volcanism, where geysers or ice volcanoes directly rocket the stuff into space. This confirmation that the asteroid really does have stores of water (possibly rivaling the amount of freshwater on Earth) also suggests that Ceres formed farther from the sun that it currently resides. Other, drier asteroids were likely spots of hot volcanic activity, suggesting they originated closer to the sun. And if it does turn out to be acting like a comet, it would further blur the lines between asteroid and comet. Once upon a time, astronomers considered them distinct, dissimilar objects: asteroids were dry rocky bodies between Mars and Jupiter, and comets were icy wet ones from beyond Neptune. But recent discoveries have been showing them to be more alike than thought, suggesting maybe they have origins and structures in common, with the differences only arising because of where they’ve traveled. It's great timing for the discovery as NASA’s Dawn probe is on its way to Ceres, likely arriving in orbit there in February 2015. The more astronomers know about the dwarf planet beforehand, the better they’ll be able to make use of Dawn’s instruments to answer specific questions. It's an exciting time for Ceres research and water-hunting alike!