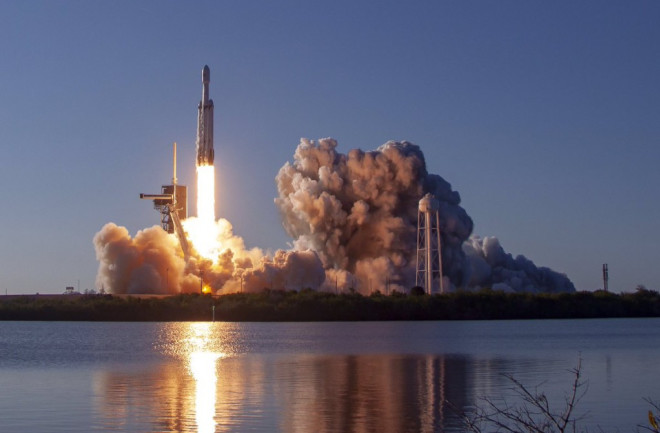 Falcon Heavy lifted off yesterday from Cape Canaveral in Florida and successfully delivered its cargo into orbit. (Credit: SpaceX) After a successful launch that delivered the Arabsat-6A satellite into its planned orbit, SpaceX also succeeded in landing all three of the boosters for their Falcon Heavy rocket — a first for the private space company. On a previous test flight, SpaceX landed and recovered only the side boosters. The launch was also Falcon Heavy's first commercial endeavor. [embed]https://twitter.com/SpaceX/status/1116553298176118784[/embed]

After multiple delays throughout early April, Falcon Heavy blasted off at the opening of its launch window on April 11, just after 6:30 p.m. EDT. The liftoff was smooth, with the communications satellite deploying into its planned geosyncronous transfer orbit 34 minutes after launch. And even before that point, SpaceX was already celebrating the successful landing of Falcon Heavy's three individual boosters. The two side boosters detach at an earlier phase of ascent and landed on solid ground 8 minutes after launch. The center core, which flies higher to continue pushing the cargo toward space, landed two minutes later. Because it flies higher and reaches faster speeds than the side boosters, landing it is a trickier endeavor, one SpaceX missed on Falcon Heavy's last test flight in 2018. But this time the main core touched down safely on the droneship "Of Course I Still Love You." That prompted Elon Musk to tweet succinctly, "The Falcons have landed." The side boosters are already marked for Falcon Heavy's next mission, currently set for June. There is no current plan to re-use the center core, but re-usability is in general a key tactic for SpaceX in lowering launch costs. So yesterday's successful flight — and landing — offer humanity a glimpse at what we can expect from the future of spaceflight. You can relive the entire launch and landing via the stream below. [embed]https://youtu.be/TXMGu2d8c8g[/embed]