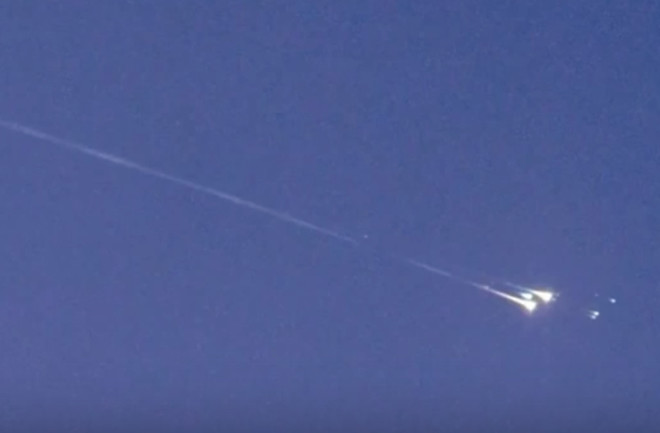 WT1109F bursts into flames as it's incinerated by Earth's atmosphere. (Credit: Astronomy Center/YouTube) A mysterious object hurtling toward Earth on Friday the 13^th was plenty of fodder to provoke superstitious speculation. Fortunately, for space observers who serve as sentinels of the skies, it was hardly a surprise, or matter of luck, when a chunk of debris dubbed WT1190F burned up in Earth’s atmosphere early Friday morning over the southern coast of Sri Lanka. Astronomers, who caught the brief fireworks show on camera, knew a rendezvous with the so-called ‘WTF’ hunk of space junk was imminent weeks ago, but some news outlets still couldn’t resist getting “mysterious UFO” in a headline.

WT1190F was believed to be a discarded rocket booster about 6 feet in diameter, according to scientists’ calculations. The Catalina Sky Survey at the University of Arizona first observed the hunk of junk back in 2013, and observers spotted the object again on Oct. 3, according to the European Space Agency. Given its size, WT1190F wasn’t expected to pose any danger to people on Earth.

On Friday morning, WT1190F entered the atmosphere at speeds of roughly 25,000 mph, according to Jonathan McDowell, an astronomer at the Harvard-Smithsonian Center for Astrophysics who also tweeted updates as the object barreled toward Earth. And as predicted, and as you can see, the object was incinerated high in the atmosphere with no collateral damage.

WTF1190F came and went in the blink of an eye, but the event still served as a valuable opportunity to collect data and refine predictive models used to forecast future collisions with Earth. WTF1190F was a good case study since it orbited Earth every three weeks in an eccentric — or non-circular — orbit. Observing WT1190F closely helped scientists better understand how space junk traveling in unusual orbits re-enters Earth’s atmosphere. As part of those observational efforts, the International Astronomical Center and the United Arab Emirates Space Agency captured images and footage of WT1109F from an airborne observatory high about the clouds as Earth's gravity the object in.

NASA and the ESA track more than 500,000 pieces of space debris — manmade and meteoroids— as they orbit Earth at speeds of 17,500 mph using radar and optical detectors. These instruments can detect objects as small as 2 inches in diameter, though some 20,000 identified objects are larger than softballs. Still there are millions more pieces that are so tiny they can’t be tracked. NASA and the U.S. Department of Defense work closely to track debris in order to forecast potential collisions and give spacecraft time to perform evasive maneuvers and avoid destruction.

The distribution of space junk around Earth. (Credit: ESA) In 2009, the first-ever in-orbit collision between two satellites occurred over Siberia. A privately owned American communications satellite slammed into a Russian military satellite and more than 2,200 fragments were generated in the collision. With 60 to 70 new satellites launched into orbit every year, traffic in the heavens is getting more congested, and collisions like this will likely happen more often, and more space debris will continue to accumulate. Roughly four or five of these collisions are expected to occur annually, adding more and more debris to the mix. WT1109F’s fiery display, it appears, certainly won’t be the last “WTF” moment.