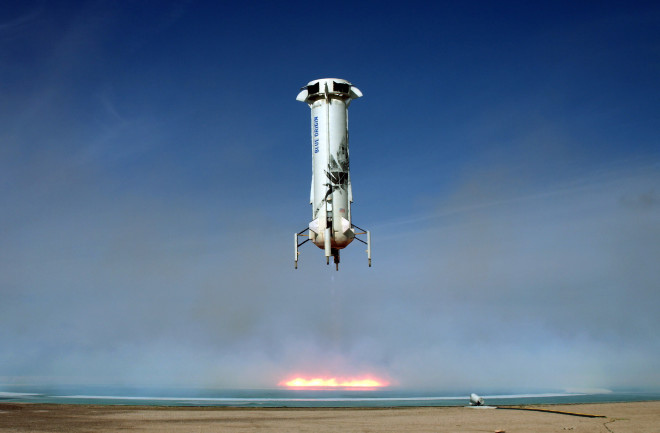 The launch marked the 100th commercial payload mission for the company and the 12th time it launched a New Shepard rocket — as well as the sixth launch using this specific booster.

New Shepard combines a reusable booster rocket with a capsule that can carry cargo — and, someday, crew. The rocket is named after Alan Shepard, the first American in space. New Shepard launches take it on an 11-minute flight that just crosses the boundary of space. Then, as it returns, the rocket booster lands vertically on Earth’s surface. The capsule comes back with a parachute system.

The reusable rocket booster landed successfully on Wednesday. It came back to the launch pad vertically, sending a sonic boom echoing across the desert. Then it hovered for a moment and touched down on the launch pad. The capsule itself landed nearby with both parachutes fully deployed.

In the near future, Blue Origin hopes to transform its capsule from a payload-bearing vehicle into one that can bring humans into space. Crewed missions would allow researchers, students and space tourists to experience microgravity.

Much like other private aerospace companies SpaceX and Boeing, Blue Origin is looking toward the new-age “Space Race” that's just ramping up. With planned future missions to the moon in upcoming years from both NASA and the private sector, Bezos’ aerospace company is hoping to create a lunar lander that it hopes can reach the moon by 2024.