Washington's Glacier Peak and its Secret History of Big Eruptions 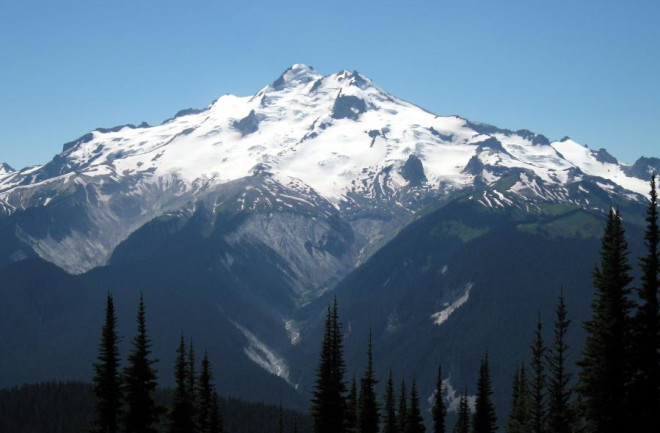 A view of Glacier Peak from the east, showing the snow-and-ice covered slopes and the wildness that surrounds the volcano. Jim Vallance, USGS. For a volcanic arc, the Cascade Range in Washington, Oregon, British Columbia and California uis pretty quiet. So quiet that it is an open question in geosciences why eruptions there seem to be so few and far between. The last eruption in the Cascades was the fairly benign 2004-08 eruptions at Mount St. Helens that, beyond an oddly H.R. Giger-looking lava dome, didn't really impact much outside the crater carved by the 1980 eruption. In fact, in the past 100 years, only Mount St. Helens has erupted — we're now past the 100th anniversary of the 1915 Lassen Peak eruption. Compare that to the volcanoes in Kamchatka, where there are three volcanoes currently showing different levels of eruption ... and that's on the quiet side of activity for the Russian volcanoes. Does this mean we shouldn't be worried about Cascade eruptions in the future? Far from it! We know that most will erupt again and many have erupted in the past 20,000 years, which is nothing in the lifespan of many volcanoes. Mount St. Helens is clearly the most famous of the bunch, but the proximity of volcanoes like Hood and Rainier to big cities (Portland and Seattle, respectively) mean they get much of the attention. However, one of the most remote volcanoes -- and least known -- might pose the biggest danger. Nestled in the northern Cascade between Seattle and Bellingham is a mountain called Glacier Peak. It isn't particular near anything, sitting over 80 kilometers to the east of Everett, Washington. Even the closet real "town" (Bedal) is really a campground along the Sauk River. As the name implies, Glacier Peak is covered in glaciers, with a dozen on its slopes that rise to over 3200 meters. You have to really want to visit the mountain to get there. However, Glacier Peak is more than a snow-and-ice-covered peak. It is a volcano that has produced the two of the largest explosive eruptions in the Cascades in the past 15,000 years. A recent study in the Journal of Volcanology and Geothermal Research by Manuel Natheson set about to calculate how big these eruptions might have been, but that question is harder to answer than you might think. Just how much stuff was spit out during an eruption in the past is complicated by the fact that volcanic eruptions just don't preserve too well. Imagine covering a table with a pile of flour and then wait a month to figure out how much flour was dumped on the table. Volcanic ash can easily be moved by wind and rain during and after the eruption ... and then, over thousands of years, processes like glaciers can erase parts of the deposits completely. So, you are trying to use data wherever you can find it to to create what is called an isopach map.

An isopach map for an eruption of Lascar in 1993. Each labeled line is of equal thickness of volcanic debris and the shape of the deposit is controlled by the wind direction during the eruption. J. Viramonte, Instituto Geonorte An isopach map (see above) is like a contour map -- you go out and measure (as best as you can) the thickness of volcanic deposits from a specific eruption. You plot that data on a map and try to create lines of equal depth and show how the ash is/was distributed. Once you have an isopach map, you can use those data to try to fit models that allow for the calculation of the total volume of that deposit when it was erupted. Now, there are a lot of assumptions that go into this related to what I mentioned before about how volcanic deposits can be altered, but you can get a range of values for the eruption itself. Now, if you do that for two eruptions that happened at Glacier Peak 13,530 and 13,580 years ago, you get some startling results. These two eruptions, spaced potentially only a half century apart, likely spewed between 1.8 and 9.4 cubic kilometers of volcanic debris, according to new calculations presented by Natheson. Those eruptions, based on the distribution of ash, may have produced an ash plume that towered more than 35 kilometers (114,000 feet) over the volcano! Ash from these eruptions fell 1 centimeter thick on the Idaho-Montana border, 640 kilometers (400 miles) away. That might not sound like much, but 1 centimeter of ash can still pose serious hazards for breathing and water supplies. Let's do some comparisons. The 1980 eruption of Mount St. Helens produced ~1.1 cubic kilometers and a plume of 23 kilometers (78,000 feet), so both of these Glacier Peak eruptions likely dwarfed the 1980 St. Helens blast. Even the largest eruption at Mount St. Helens in the last 4000 years, the Yn ash, was up to ~8.8 cubic kilometers of debris. So, Glacier Peak produced twin blasts bigger than anything Mount St. Helens has generated geologically recent. In fact, only the eruption of Mount Mazama that produced Crater Lake (7,700 years ago) was larger, but that was in its own class, erupting over 45 cubic kilometers of volcanic debris!

USGS hazard map for Glacier Peak, showing the potential paths of volcanic mudflows (lahars) that could reach cities over 60 kilometers from the volcano. USGS/CVO. Yet, even with its remote location, another eruption of Glacier Peak on the scale of these twin explosions would have serious ramifications (see above). Volcanic mudflows (lahars) produced by melting the snow and ice on the volcano would likely reach Puget Sound and inundate cities like Burlington and Stanwood, potentially closing I-5. Ash would spread east with the prevailing winds and coat eastern Washington, Idaho and Montana ... and likely close airspace over the northern half of the United States, at least while the eruption was ongoing. If eruptions like this persisted for weeks or months, this could be seriously taxing to aviation across the continent. A volcano doesn't need to be next to a city to pose a real hazard. Even smaller eruptions (which have happened as recently as 1,100 years ago) would have serious implications for the people of Washington. Right now, the USGS has only one lonely seismometer near Glacier Peak to look for signs that it could be awakening. Survey volcanologists are definitely looking at ways to strengthen the monitoring of Glacier Peak, but it costs money to install and maintain seismic networks, and even volcanoes like Mount Baker, near Bellingham, WA, only have 2 seismometers. The gap in monitoring along the Cascade Range is real, but "well-behaved" volcanoes rarely get notice. However, new evaluations like these of the volumes of explosive eruptions in the Cascades are important to better understand what hazards the volcanoes presents. We know that the Cascades can stay quiet forever, so we should be ready with plans of how to deal with something potentially catastrophic where we might be expect it.