Waiting for the Next Pompeii (It Won't Be Long)

As a would-be Hollywood blockbuster, Pompeii is fizzling out. But when you watch the movie through the eyes of a volcanologist, things look quiet a bit different. "I thought, oh boy, another volcano movie. There’s already been Dante’s Peak, Volcano...but I was positively surprised. Actually, I was blown away," says Florian Schwandner of NASA's Jet Propulsion Lab. "Some of the effects that were used to show eruptive events in Pompeii were so realistic that I wasn’t sure if they used actual footage from eruptions of if it was animation. They got a lot of things very right, right enough that as a specialist I was excited seeing it."

The 79 AD eruption of Vesuvius, as envisioned in the movie Pompeii. (©2014 Constantin Film International GmbH and Impact Pictures (Pompeii) Inc.) To Schwandner, the real drama in Pompeii is not the love story or the swords-and-sandles battles, but the meticulous depiction of what happens when Earth's inner heat finds its way to the surface. (Um...you didn't need a spoiler alert for that, did you?) He also regards the movie as a fabulous teaching moment: an opportunity to remind people that the eruption of Vesuvius in 79 AD is just one small example of what our planet is capable of. More than 500 volcanoes around the world have erupted in historical times, and more 1,500 are likely to be active. “That’s a lot of volcanoes," Schwandner laughs. "There are over 60 appreciable eruptions every year. Stromboli in Italy erupts every 20 minutes.” Every 20 minutes? Who knew? Now Schwandner is on a roll, tossing out more statistics. About 10 percent of the entire human population lives in the vicinity of a volcano (ie, the region where an eruption would have a direct impact), he tells me. The World Organization of Volcano Observatories, or WOVO, has 70 member organizations, which collectively monitor nearly 300 volcanoes. The Alaska Volcano Observatory keeps track of 20 volcanoes. Indonesia monitors 130, including the spectacular eruption earlier this month of Mount Kelud, which forced a widespread evacuation in East Java. With all that monitoring, I wonder, how good is volcano forecasting these days? “The success rate over the last several decades has been tremendous,” Schwandner says. “We have 70% accuracy on the 2-week time margin by some accounts, which is better than storm forecasting.” Take that, Al Roker. 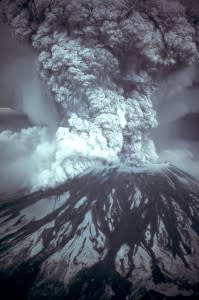 This is what Mount St Helens did in 1980. Mount Rainier could produce an even more destructive blast. (Credit: Austin Post, USGS) Getting to such a high level of accuracy requires monitoring many different symptoms: “Seismic activity, deformation, gas releases, changes in aquifers, visual monitoring—a whole suite. Monitoring is always multidisciplinary, and it is always probabilistic,” Schwandner continues. Translation: His Italian colleagues would issue a warning if they begin to see a combination of danger signs, but nobody can predict far in advance when that might happen (just as nobody can forecast next year's storms). If the signs get bad enough, local authorities would order an evacuation around Vesuvius. The same goes for potential eruptions at danger zones in the United States, such as Yellowstone or Mount Rainier. The Disaster Scenario The buildup to disaster would go something like this. Satellite radar and ground sensors would detect changes in the shape of the landscape round the volcano. Up to two months before an eruption, gas monitors would pick up elevated releases of carbon dioxide. As magma and gas squirm their way closer to the surface, there would be more CO2, earthquake swarms, and changes in local aquifers. A couple weeks before, the monitors would start picking up increasing emissions of sulfur dioxide. Unfortunately, all of these measures are subjective. “There are no definitive thresholds,” Schwandner admits, “but if more than one symptom starts changing with any other, then the Italian observers will start to get worried.” Vesuvius is a particularly tricky because the surrounding area is so densely populated, with more than 1 million people living in the danger zone. A rapid evacuation, based on a very high, near-term risk, would be impossible. An unnecessary evacuation, based on a low, long-term risk that never materializes, would devastate the local economy. Schwandner doesn’t mention it, but that uncertainty reminds me of the seven Italian seismologists and government officials who were found guilty of manslaughter for failing to warn adequately about the 2009 L'Aquila quake. This is a delicate business. 79 AD, Revisited To get a sense of what might happen if Vesuvius really were to blow again, Schwandner looks back to the events of 79 AD, essentially ticking off the various calamities depicted in Pompeii the movie. There would be pyroclastic flows and pyroclastic surges—currents of hot gas and ash that incinerate everything in their way. Contrary to what you’d expect from the names, flows are actually faster than surges because they are denser. They can reach speeds of 400 miles per hour and temperatures of 1,800 degrees F, and can travel five miles or more. “If you’re within reach of that, you’re toast. You’re pretty burnt toast,” Schwandner notes. I’m thinking that even in a car there would be no escape--defying the cinematic cliche of the hero who outruns the explosion. Schwandner gently corrects me: “There’ve been recorded cases of people being able to out-drive a pyroclastic flow, but those were extremely lucky cases. I wouldn’t count on that.” For the less fortunate, the archaeological site of Pompeii offers a somber picture of what would happen next. Most of the fatalities happened during the pyroclastic surges on the second day of the 79 AD eruption; the proximate cause of death was heat shock, which happened so quickly that "there was no time to scream," according to Schwandner. Even so, the temperature of the surges was just 500 degrees F or so, because they had cooled considerably on their way down the mountain. "That’s why bodies didn’t…pardon the terminology, explode," he says. "Think of a hot plate, put a drop of water on it, the water would just puff away." 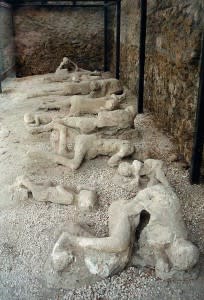 Victims of the 79 AD eruption of Vesuvius were killed instantly, their forms preserved in ash. (Credit: Lancevortex) Instead the corpses at Pompeii were entombed in ash, and then rotted away from within, leaving the ash shells intact. Not a pleasant thought either way. Pompeii's Sequels Vesuvius is still active, having last erupted in 1944. Much of the ash layer that tourists see when they visit Pompeii is not from the 79 AD eruption, as most assume, but from subsequent activity. And many other sites have experienced similar devastation in modern times. The eruption of Mount St. Helens in 1980 was as powerful as the eruption that obliterated Pompeii, I'm surprised to hear. Studies of that eruption inform much current research: Volcanologists refer to Mount St. Helens as "the master teacher." As Schwandner keeps telling me, it is a mistake to think about Pompeii purely in historical terms. Refugees from Mount Kelud are just now returning home. Meanwhile, Schwandner is so enthusiastic about Pompeii the movie that I am warming to it. Yes, it's a corny mash-up of Gladiator and Titanic, with a plot boxed in by its own inevitability, but if you think of the volcano as the main character it becomes much more convincing. "When I go to see a movie like this I have a checklist in my mind, what will they get wrong this time? Will they have a lava flow running very fast? In this case, I think they did a tremendous job getting things right," Schwandner says. 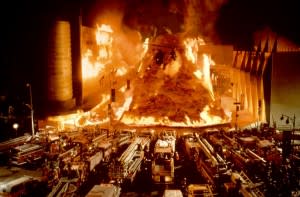 A volcano in Los Angeles? Only in the movies... (Credit: 20th Century Fox) He ticks off the main offenses he encounters in volcano movies. People outrun pyroclastic flows; conversely, lava flows move too quickly, for added menace; eruptions impossibly combine ash eruptions with massive lava flows; geologic events take place out of order; special effects suffer from a general lack of scientific honesty. Pompeii passes these key tests. OK, I've got to know: What is the most scientifically infuriating volcano movie? Schwandner doesn't even need to consider the question. "Volcano, set in LA. One of the worst depictions of volcanic activity. And I live in LA..." -- Follow me on Twitter: @coreyspowell