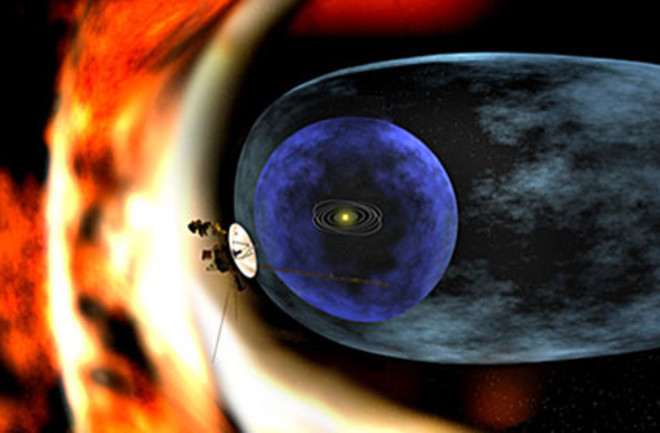 Nobody expected to take it this far. When NASA launched two probes named Voyager 1 and Voyager 2 in the summer of 1977, scientists hoped the probes would get as far as Saturn during their five-year mission. Instead, the nuclear-powered explorers are still sending data home over 30 years after their launch, and are currently pushing through the boundary of our solar system into interstellar space. A collection of five papers in tomorrow's issue of the journal Nature [subscription required] analyze the data sent back from Voyager 2 as it reached

a turbulent frontier known as the termination shock. The sun is constantly spewing out particles in all directions; as these particles move through the solar system, they are known as the solar wind. This wind pushes back against the interstellar plasma that exists throughout the galaxy. At the end of the solar system, the solar wind finally begins to lose out and its speed drops below the speed of sound (relative to the interstellar medium), resulting in a roughly spherical shell known as the termination shock front

. Voyager 1 passed through the shock in a different region several years ago but vexed scientists by failing to send back data during that crucial transition. That made Voyager 2's observations all the more critical. NASA says the probe encountered the termination shock over August 31 and September 1 of last year, and surprised researchers by crossing the boundary several times. The multiple crossings indicate that “the shock is not the steady structure that is predicted by the simplest theory,” says Len Burlaga of NASA’s Goddard Space Flight Center in Greenbelt, Md. “It is like a wave approaching a beach, that grows, breaks, dissipates, and then re-forms closer to shore"

The intrepid Voyager 2 also startled researchers by encountering the shock sooner than expected. The two probes had taken different trajectories through the solar system, leading Voyager 1 to the north, where it passed through the termination shock at a distance of about 8.7 billion miles from the Sun. Meanwhile, Voyager 2 headed to the southern edge, where it reached the shock at about 7.8 billion miles. Researchers say this indicates that the solar system isn't round, but rather dented or squashed on one side.

"We used to assume that it's all symmetric and simple," said Leonard Burlaga, an astrophysicist at NASA's Goddard Space Flight Center in Greenbelt, Md. "It's literally like a hand pushing." That push is from the magnetic field that lies between star systems in the Milky Way. The magnetic field hits the solar system at a different angle on the south than on the north, probably because of interstellar turbulence from star explosions, said Voyager project scientist Ed Stone [AP].

Now both Voyagers are beyond the heliosphere, the region of space before the termination shock that is strongly influenced by the solar wind, but their mission is far from over. Next they'll travel through an intermediate region where the wind is slowed and will head towards the heliopause, which marks the true edge of the solar system. MIT's John Richardson says:

"We hope the Voyagers will cross the heliopause boundary in about 10 years and be the first spacecraft to measure what is outside of the Sun's heliosphere" [Telegraph].