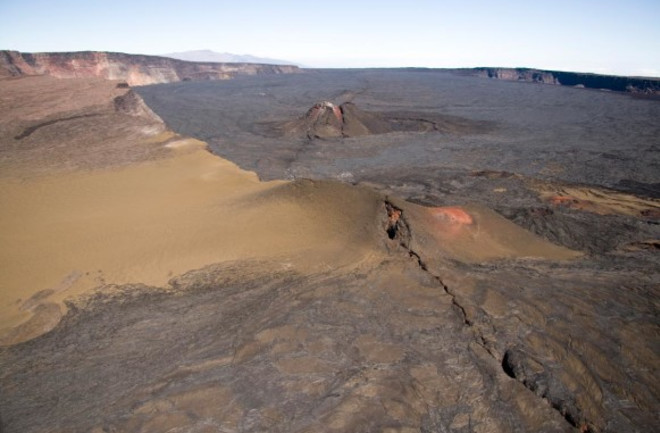 A view across the summit caldera of Mauna Loa in Hawaii, seen in January 2010.

Last week was the Geosciences Department field trip, so I missed writing about a few important volcanic events, so I'll try to play some catch-up here. Hawai'i The big news from Hawai'i is the change in the alert status for the big island's largest volcano, Mauna Loa. Quiet now for 31 years, Mauna Loa was raised to a Yellow alert status after continued deformation of the volcano's surface and shallow earthquakes at the volcano's

summit, upper Southwest Rift Zone, and west flank. All these signs came before the last two bouts of eruptive activity at Mauna Loa in 1975 and 1984. However, the Hawaii Volcano Observatory says that there is no indication that a new eruption is imminent. This new swarm was one of many that have occurred at Mauna Loa over the past 20 years, including a strong sequence of earthquakes in 2004-05. The largest threat from Mauna Loa is the potential for lava flows on the Northeast Rift reaching all the way down to Hilo, which has happened as recently as 1881.

Since late 2013, the number of earthquakes has increased at Mauna Loa, from less than 10 per week to closer to 50-80 per week (see below). Combined this with the increasing spreading across the summit caldera, and it made sense for the USGS to raise the alert status for the largest volcano in the US.

Two graphs showing the number of earthquakes recorded at Mauna Loa per week (top) and the change in distance between two GPS stations across the summit caldera (bottom). Both show increasing signs of magma filling under the volcano since late 2013.

EcuadorCotopaxi in Ecuador continues to produce a more-or-less constant plume of steam and ash rising hundreds to over a thousand meters above the volcano. The IG-EPN has laid out a number of scenarios as the activity continues at the restless volcano: (1) a slow increase of activity as magma rises into the volcano, producing small explosives and pyroclastic flows, like is seen at Tungurahua or (2) a rapid increase in activity from magma quickly filling the volcano, potentially leading to a larger explosive eruption. So far, there is no indication to which scenario is more likely to play itself out. This restlessness at Cotopaxi has already started to have a negative impact on the price of homes in areas that could be impacted by eruptions. Tanzania There was a bit of a kerfuffle over a potential eruption spotted at Meru in Tanzania, but the plume was actually from a large wildfire on the slopes of the volcano that last erupted over 100 years ago. Sometimes differentiating a fire plume from a volcanic plume can be tricky, but I talk about some of the ways to do it in the NASA Earth Observatory post on the plume.