Volcanoes on Venus Could be Alive & Ready to Erupt 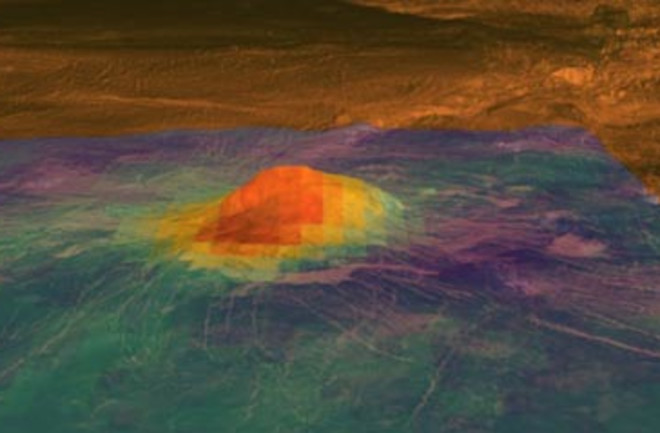 The moment you read this, volcanic eruptions could be happening on Venus. Planetary astronomers have been debating whether Venus is or was geologically active, and whether the geologic hotspots previous missions saw mean that Venus is one of the few places in the solar system to have experienced volcanism. Now, according to data from the European Space Agency's Venus Express mission, there's every reason to believe that Venus not only has been geologically active and volcanic during its lifetime, but also might still be today, according to Jörn Helbert, coauthor of the study in Science.

“The solidified lava flows, which radiate heat from the surface, seem hardly weathered. So we can conclude that they are younger than 2.5 million years old — and the majority are probably younger than 250,000 years.... In geological terms, this means that they are practically from the present day” [Wired.com]

features that looked like large shield volcanoes, such as Hawaii's Kilauea and Mauna Loa. Some of these rise roughly a mile above the surrounding plain and have rise diameters that span more than 1,600 miles [Christian Science Monitor]

. And gravity measurements suggested large pools of magma lie beneath the surface of these formations. For this study, the Venus Express measured the composition of the surface materials near these hotspots, and found just the concentration of iron-bearing materials you'd expect from from volcanism. The researchers then used that chemical composition to estimate how long the material had been exposed to the conditions on Venus' surface. The answer? The blink of an eye, in geologic terms. Study coauthor Suzanne Smrekar says it's even possible that scientists spotted a volcanic eruption on Venus last July, when a mysterious bright spot was seen in the Venusian atmosphere.

Smrekar and several of her colleagues are following up on this event to see if a volcanic eruption from one of these hotspots coincides with the spot and could feasibly explain it. If so, then that link could serve as further evidence that Venus' volcanoes are still active. "We're kind of going from warm, warmer, warmest to maybe really hot," Smrekar said [MSNBC].

Besides the thrill that Venus could be geologically alive, the possibility of ongoing volcanic activity could help to clear up a mystery about the planet. One need only look up at the cratered moon on a clear night to be reminded that the inner solar system has endured periods of heavy asteroid bombardment. But Venus, our probes have shown, is not a particularly puckered place, so somehow it must have been resurfaced. Because Venus lacks the water that's apparently necessary for plate tectonics, the most likely explanation for Venus' smoother surface (and also how heat escapes its interior) is through volcanic eruptions. Helbert and colleagues plan to try to recreate some of the surface conditions of Venus in the lab to test out their ideas. But that might not be the only way to answer the intriguing outlying questions about our sister planet.

Future landers could get better measurements of conditions there, which would aid lab experiments that try to mimic weathering processes on the sweltering planet's surface [MSNBC]