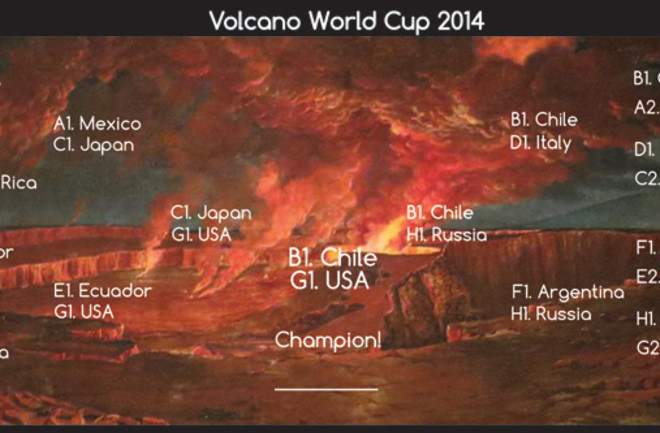 Titian Peele, Kilauea at Night (1842, background image) We've made it to the Finals of the Volcano World Cup. Thank you to everyone who cast the tens of thousands of votes across the tournament. The Semifinals were the most exciting matches so far, with Chile starting slow but then running away from Russia 62%-38%. In the other match, the USA pulled out a nailbiter, edging Japan by only 9 votes! This lines up a Final between two titans of volcanism. Voting is open until 5 pm on Sunday July 13!Volcano World Cup FinalChile: What can be said about Chile that hasn't already been said? Over 127 potentially active volcanoes, 500 more volcanic edifices that may have been active over the last few million years. Giant calderas, towering composite volcanoes, lava lakes, obsidian lava flows. Volcanism in Chile is vital for the country's economy as much of the valuable copper deposits are porphyry copper, formed as fluids from cooling magma interacted with the crust millions of years ago. Few countries are so completely wedded to the volcanic history of their nation like Chile. The image for the final is the massive ash plume that was produced during the early stages of the Puyehue-Cordón Caulle eruption. The 2011 eruption spread ash across much of southern South America, causing flights to be cancelled across Argentina, Brazil, Uruguay, Paraguay and as far off as New Zealand and Australia! Few places on Earth have had such a massive eruption in the last century, let alone last decade -- and Chile has done that twice.Who Chile beat to get here: Spain, the Netherlands, Australia, Cameroon, Italy and Russia

The plume from Puyehue-Cordon Caulle seen on June 6, 2011.

NASA Earth Observatory.United States: However, if any country can stand up to the relentless volcanism of Chile, it is the United States. You might not realize it, but the USA might have more potentially active volcanoes than Chile, thanks to the long stretch of volcanoes along the Aleutian Islands in Alaska. Throw in the Cascade Range, the Long Valley Caldera, Yellowstone Caldera (see below), Valles Caldera in New Mexico, the San Francisco Volcanic Field in Arizona, Clear Lake in California, the Wrangell Range in Alaska, Hawaii, the Mariana Islands and the multitude of other volcanic features strewn across much of the western United States, it is really the varieties of volcanism that really strike you. They might not be as active as some of their Chilean counterparts (well, at least not the volcanoes in the lower 48 states - unless you include Mount St. Helens), but the United States is as much of a hotbed of volcanism as anyone. Who the USA beat to get here: Germany, Portugal, Ghana, Algeria, Ecuador and Japan

The Norris Geyser Basin in the Yellowstone Caldera.