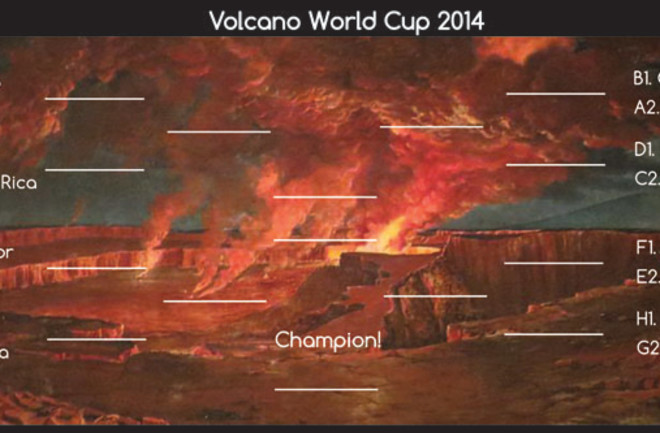 The bracket for the 2014 Volcano World Cup.

Titian Peele, Kilauea at Night (1842; background image) The Volcano World Cup rolls on. Be sure to vote in the Round of 16 Games 1-4. Game 5Ecuador: One thing that many people don't realize is that glaciers exist even near the equator. Case in point, Cotopaxi (see below) in Ecuador. The active volcano has glaciers on its slopes even at its low latitude ( ) thanks to its high altitude -- that is, the summit is upwards of 5,911 meters (~19,300 feet). Cotopaxi was one of the the most active of Ecuador's volcanoes during the 17th century into the early 20th century, but its last eruption was now over 74 years ago. Now this doesn't mean that its "due" or anything like that -- most volcanoes have periods of high activity and dormancy -- so this quiet at Cotopaxi is normal volcanic behavior.

The symmetrical cone (at least from this vantage) of Cotopaxi in Ecuador.

Gerard Prins / Wikimedia Commons Iran: The shot of Iran's Bazman featured by the NASA Earth Observatory (see below) is one of my all-time favorites. Much like the region in the Atacama where I worked in the Andes, Iran's volcanoes are in a very arid region, so many of the features on the volcano are preserved extraordinarily. The lava flow marked on the image has well-defined levees on the edges and is likely tens of meters tall -- but still a basaltic eruption. If you look to bottom right, you'll also see some round pancake-shaped features that are small lava domes as well. However, even if those features suggest recent volcanism (in the last few thousand years), the well-developed drainages around Bazman (into volcanic tuff deposits, betraying the volcano's explosive past) suggest that much of the volcano is old because it would take a long time in such an environment to develop such a drainage system. In all cases, a gorgeous shot of a volcano from space.

Bazman in Iran seen from the International Space Station on January 5, 2014.

NASA Earth Observatory Vote! (Open until July 1 at noon EST).Game 6Argentina: Aracar is mostly in Argentina, but still partly straddles the Chile-Argentine border. Much of the volcano is an andesite stratocone that was constructed on an older volcano that was dacite lava domes. This pattern of younger volcanoes forming in the remnants of older volcanoes is very common, especially in the Andes. It might reflect some places in the crust where it is easier from magma to rise, possibly due to faults or weaknesses in the rocks. Aracar is also odd as most of the volcanic features that look young are at the base of the volcano rather than the peak, suggesting that much of the activity over the past few tens of thousand years might have been from the flanks of the volcano.

The peak of Aracar (background) in Argentina.

Kevin Jones / Flickr France: As I mentioned in the Group Stage, most of the volcanoes of Frances are located far from Paris -- in distant oceans that were part of the French Empire. Probably the most active volcano on French soils is on Reunion Island in the middle of the Indian Ocean, where Piton de la Fournaise (see below) has eruptions every few years (including just last week). The large shield volcano is similar in many ways to Kilauea, were many of the eruptions occur as mafic (low silica) eruptions of lava flows from fissures that open on the sides of the volcano. There are also multiple calderas on the volcano, likely formed by slow slumping of the summit after lava drained from the the reservoir just beneath the surface.

Lava flows and a small cinder cone on Piton de la Fournaise in the Indian Ocean.

Pierre Guinoiseau / Flickr Vote! (Open until July 1 at noon EST).Game 7USA: The largest volcano in the Cascade is Shasta (see below) and it is huge. In fact, it isn't even really a single volcano but four volcanoes built on top of each other. This is most clearly seen with Shastina, the cone built on the left side (in this image) of the volcano. Not only is Shasta big, but think about this: much of the ancestral volcano now sits in the lowlands to the west of the volcano, caused by the largest known debris avalanche in the Cascades. Shasta has now been quiet for 228 years, but a lot of Shasta's eruptive history is not well constrained, so we don't know how frequently it has been active over the last few thousand years. This is astonishing considering the potential threat the volcano poses to air traffic across North America.

The slopes of California's Shasta.

Ewen Denney / Wikimedia Commons Algeria: I'm a little hard pressed to find much to say about the volcanic features of Algeria. Not that they aren't cool, especially when seen from space (see below). However, so little is know about them that it can be challenging. However, one thing that we can tell from the volcanic deposits in places like the Tahalra Volcanic Field: Algeria used to be wetter when some of these volcanic features formed tens of thousands of years ago. Maybe of the features are maars -- explosion crater formed during the interaction of magma and water. Now, this water could have been shallow groundwater or surface water, but likely it does need more water than we find in the Sahara today.

USGS/NASA (processed by Erik Klemetti) Vote! (Open until July 1 at noon EST).Game 8Russia: This shot of a 1994 eruption of Kliuchevskoi (see below) captures the density of volcanoes in Russia's Kamchatka. Kliuchevskoi itself is producing the large tan ash plume that is spreading east over the Pacific Ocean. On the slopes of Kliuchevskoi (to the right on the image) are Kamen, then Bezymianny. In the foreground, covered in snow, is Ushkovsky. Lost somewhat in the ash plume, halfway between Kliuchevskoi and the volcano with the caldera (large pit) at the summit is Zimina, while that volcano with the caldera is Tolbachik. Just in front of Tolbachik is Udina. So, in this single show, we have 8 potentially active volcanoes spread across ~45 kilometers of distance. Impressive, to say the least.

An eruption of Russia's Kliuchevskoi in October 1994, seen from the Space Shuttle.

NASA Portugal: In the face of what Russia has to offer in terms of volcanism, you have to feel at least a little sorry for Portugal. Much of the recent eruptive activity in the Azores has been submarine, so we haven't even really been able to see the eruptions in much detail. Probably the most hazardous of the volcanoes in the Azores is Furnas (see below), on the island of Saõ Miguel. In 1630, this caldera volcano produced an explosive eruption that caused widespread damage and deaths and was likely a VEI 5 eruption (roughly the same size of the St. Helens 1980 eruption). Much of the explosively of that eruption was driven by the interaction of the magma with water (like the 2010 eruption of Eyjafjallajökull) and ash from the eruption was noticed over 550 km away from the eruption. Impressive to say the least for a volcano most people are completely unfamiliar.

Furnas Lake, filling the caldera that was the source of the 1630 explosive eruption of Furnas.