Volcano Erupts on the Island Where MH370 Debris Washed Up 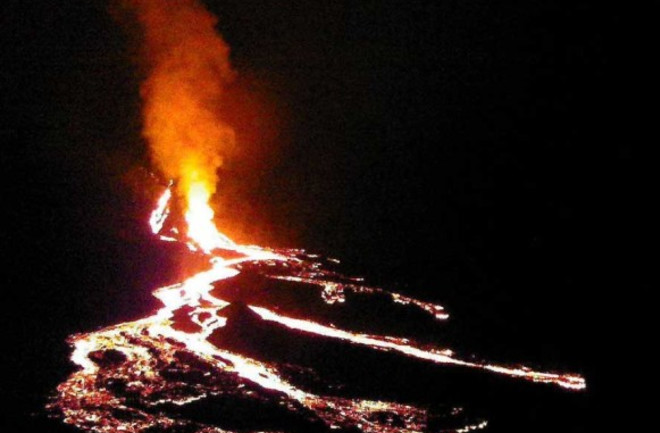 Piton de la Fournaise on Reunion Island has started erupting again---for the second time in the last two months. The small island in the Indian Ocean gained some notoriety after a piece of the missing Malaysian Airlines Flight 370 washed up on its shores, but prior to that, it was really the volcanism from the aptly named Piton de la Fournaise ("Furnace Peak") for which Reunion was best known. As is typical for Piton de la Fournaise, a new fissure vent opened overnight after a brief period of earthquakes (likely caused by the magma making its way to the surface) and lava flows have been issues from the fissure ever since (see GIF below). A fairly impressive lava fountain is the source of these flows that are centered at Piton de Bert on the main volcano. The lava flows are occurring far up the slopes of the volcano, so far from anyone living on the island itself, so they are really a spectacle rather than a major hazard.

, along with a bit of an obscured view from Piton de Basaltes

. If this eruption follows the script of many of Piton de la Fournaise's eruptive events, it might last a few days to a week before the supply of lava peters out again.