Volcanism and Society: The Case of Indonesia 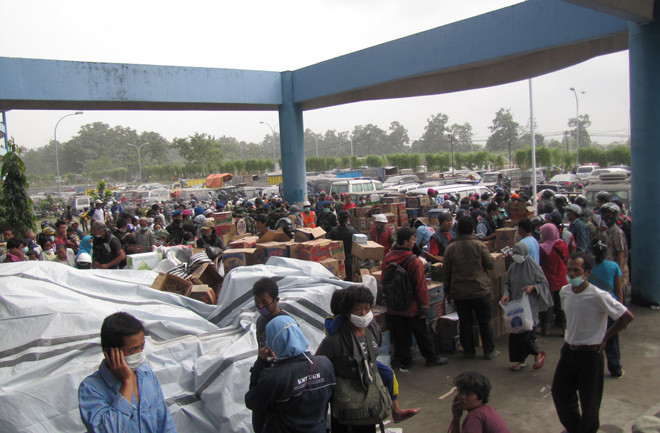 Local authorities help refugees during the 2010 eruption of Merapi in Indonesia. Image: Mathias Eick EU/ECHO Sometimes it is hard to comprehend how much effect volcanic activity has on countries where erupting volcanoes are more commonplace. The United States has at least 65 known active volcanoes, but many of those volcanoes are in remote places like the Aleutian Islands. The majority of volcanoes near populated areas are fairly quiet right now -- think Hood in Oregon or Rainier in Washington. However, some countries have a much higher density of volcanoes near population centers. The Volcanoes of the World - 3rd Edition had a graph of number of volcanoes compared to the population near these volcanoes and Indonesia leads the world in quantification -- what they call a "VPI". This stands for "Volcano Population Index" and more or less is a measure for how many people live within X km of a volcano that is known to have erupted since 1500 AD. So, VPI10 will tell us how many people live within 10 km of a historically active volcanoes. For a country like the United States, that number of relatively low, somewhere in the vicinity of a few thousand people (see below). However, for Indonesia, where there are at least 167 active volcanoes, the VPI10 is 5-10 million people. If you compare that to the total population of each country, for the U.S., only 0.001% would be considered VPI10, but in Indonesia, that percentage is closer to 3-5%. If you look at the VPI100 for Indonesia (people within 100 km of a Holocene volcano), the figure grows to a staggering ~200 million -- almost the entire population of the island nation.

A plot of population vs number of volcanoes (y-axis, unlabeled), showing the VPI10 for various countries and regions of the world when considering eruptions since 1500 AD. Image: Volcanoes of the World - 3rd Edition, Figure 12. Why all this discussion of population and active volcanoes? Well, I saw an article today where Surono, the director of the Indonesian Volcanology and Disaster Mitigation Center, said that around 5 million people in Indonesia are currently refugees from volcanic activity - yes, 5 million! That is roughly the same as the population of Colorado, all in shelters or away from their homes due to volcanic activity in their country. Some of these people are fleeing actively erupting volcanoes like Sopatan or Gamalama, while others are still staying away from volcanoes that the Volcanology and Disaster Mitigation Center has declared safe, like Sinabung that has not erupted since 2010. The landscape -- both geographically and socially -- in Indonesia is dominated by volcanism, and even small eruptions can have a significant impact of thousands of people's lives.

The Source of the Nile River: A Mystery That Spanned Three Millennia