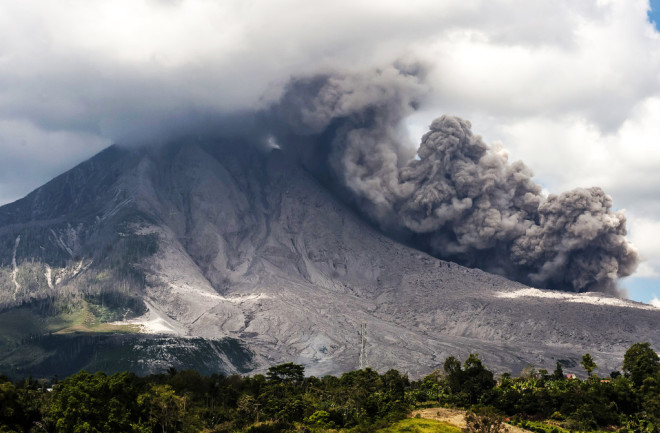 A picture taken in Berastepu Village, shows volcanic smoke and ash rise from Mount Sinabung during an eruption, in Karo, North Sumatra, Indonesia on January 10, 2016. Y.T HARYONO/Anadolu Agency/Getty Images Some updates and news from the world of volcanoes this week: Indonesia Another volcano in Indonesia is causing evacuations due to increasing unrest: Gunung Egon on the island of Flores. Contrary to many media reports, the volcano has not erupted for the first time since 2008. Instead, strong sulfur dioxide emissions from the volcano has led to over 1,200 people living within 3 kilometers of the volcano being asked to evacuate (although apparently many refused). Even more are being prepared to do the same if the unrest leads to an actual eruption. The current activity is fairly minor, but previous eruptions in 2004 and 2008 produced ash plumes upwards of 6 kilometers (19,000 feet) and forced 6,000 people to leave their homes. Sinabung, the most active volcano currently in Indonesia, continues to erupt as well---the volcano produced at least a dozen pyroclastic flows over the past week as the dome in the volcano's crater grows and collapses. Mexico Both Popocatépetl and Colima have had particularly busy weeks. Popocatépetl was especially active, enough so that people living near the volcano were on an a yellow alert---they need to be prepared to evacuate after the volcano produced some 2 kilometer (~6,600 foot) ash plumes. Meanwhile at Colima, officials are complaining that the monitoring equipment promised by the government in July 2015 has yet to arrive, which is troubling considering the number of explosive eruptions the volcano is producing. Russia Eruptions at Zhupanovsky on the Kamchatka Peninsula continued this week, prompting some air traffic restrictions as the volcano throws up ash plumes reaching ~8 kilometers (~27,000 feet). This eruption is part of ongoing activity at Zhupanovsky that started in June 2014---the volcano experienced a partial collapse in December 2015. Satellite images have captured a thermal anomaly, which supports the idea that new magma is actively reaching the surface. KVERT has placed Zhupanovsky on an orange aviation alert due to these strong explosive events. Philippines Rumors have been flying that a fire on the slopes of Makaturing may have been started by an eruption. This would be surprising considering that PHIVOLCS reports no unrest at the volcano, which hasn't erupted since 1882. Officials in the area suggested that the fire could have been started by a careless hunter, but the area's remote location means there hasn't been much direct observation of the fire. Typically, without any other signs of volcanism like earthquake swarms or a sulfur dioxide plume, these fires don't end up being related to any eruption.