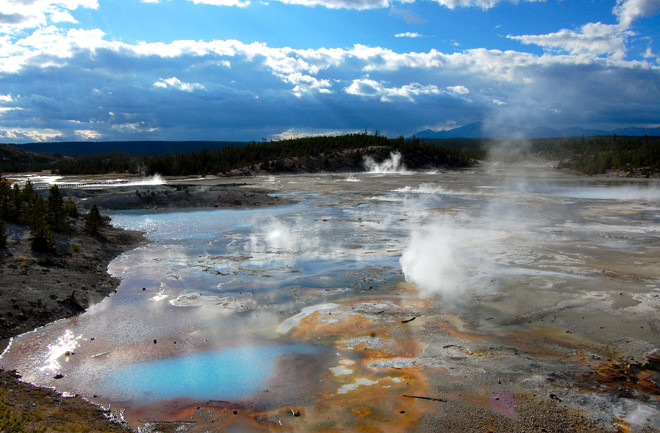 "Hello, my name is Yellowstone. I might look mean, but really, I'm a nice guy." Image: Erik Klemetti Sometimes I get very frustrated by the way volcanoes are portrayed in the media. Yes, I realize that most people want to play up the sensationalism and "danger!" aspect of volcanic eruptions, but that doesn't mean I have to like it. For example, today on io9 that was a post by Annalee Newitz* to promote her new book in which she lists why we're headed towards an extinction event. Now, much of the post is obviously glossing over a lot of details on some of the current signs that we might be potentially headed towards an extinction -- things like climate change, ocean acidification, megafauna die-outs (well, if you don't count all those pesky African megafauna) -- an interesting list to say the least. However, what rubs me the wrong way is the #1 reason we're headed towards an extinction. Let me show you.

1. Earth Is Bubbling with Super Volcanoes**Yellowstone Park in the United States is actually a volcano caldera, a thin cork of earth that sits on top of a massive cache of broiling magma. And this super-volcano could blow any time. The last time Earth witnessed an explosion of this size was in 1812, when Mount Tambora in Indonesia erupted so profusely that the Earth's climate cooled for several years afterwards. Even more frightening is the prospect that another kind of super volcano, called a large igneous province (LIP), could become active sometime in the future. A now-inactive LIP, called the Siberian Traps, erupted 250 million years ago. It spewed so much sulfur, carbon other greenhouse gases into the air that the Earth experienced a climate change catastrophe, vacillating wildly between extreme heat and cold until 95 percent of all life had died. This mass extinction was so bad it's been nicknamed "the Great Dying" by geologists. Yellowstone is not a LIP, but if it explodes into a super eruption, the damage will be incredible.

There you have it. We're headed towards an new mass extinction because of all the supervolcanoes that are primed to erupt. Like I said, I get it. Saying we're going to have another supervolcanic eruption is sexy and gets readers but honestly, is this the best we can do? One thing I like to point out about the Yellowstone supervolcano and its massive eruptions -- ever look to see how the last three eruptions actually match with known extinction events? The last three major eruptions at Yellowstone were at 2.1, 1.6 and 0.66 million years ago and of those three ages (which are well-defined using radiometric dating techniques), only one is even within a single known extinction event -- the Pliocene-Pliestocene marine boundary. Now, this extinction event is not well constrained -- it is thought to be associated with a supernova explosion in a nearby star cluster. In fact, if you do a scholarly search for this extinction, you don't find a single implication that it is associated with an Yellowstone eruption. So, there isn't much evidence that any of the massive eruptions from Yellowstone directly lead to a global extinction. This doesn't mean they didn't have a large climatic impact thanks to the release of ash and volcanic gases -- we probably did see many years of cooler climate. However, they are not the true extinction-levele events that they are made out to be, at least not on a global scale. Oh yes, and the idea that we're "due"? We have a population of three eruptions from a caldera system that is moving due to the motion of North America. Check out this map of the Yellowstone Hotspot track. Note that it isn't a path of massive eruptions every 0.6 million years since 16 million years ago (what is thought to be the start of track). Why should we assume that the next eruption has to occur in the same interval as the last three? We can't. In fact, recent studies point to the fact that Yellowstone is much more likely to small eruptions in the future than a big whammy. Most of the major extinctions that have been connected to eruptions (and there aren't any that have been definitively) are associated with the real big guns of the volcanic realm - the large igneous provinces (LIP). However, as I discussed before, these are more like quicksand than bombs -- they likely take hundreds of thousands to millions of years of activity to impart their impact on the Earth's climate due to the increased emissions of volcanic gases like carbon dioxide and sulfur dioxide. So, pointing at a LIP as a singular event that caused an abrupt extinction (and they are never as abrupt as they are made out to be) is just fitting the facts to your chosen storyline. There is no evidence that there is a periodicity of LIP occurrence on Earth (the last being the Columbia River Basalts, which started ~16 million years ago and last almost 10 million years -- and has no known extinction associated with it). Yet, here we are, having to hear how SUPERVOLCANOES WILL DESTROY THE PLANET. Sure, human civilization will not deal with a massive Yellowstone eruption well -- especially North America. Yet, always pointing towards "supervolcanoes" at every opportunity is much closer to fearmongering than actual science reporting. These so-called "supervolcanoes" are an easy target (like asteroids). It is simple to point to them and say just about anything because we don't know a lot about how exactly the largest of the large eruptions impact the planet. Even some of the biggest of the last 100,000 years -- eruptions like Toba, Tambora, Taupo -- didn't cause massive, planet-wide devastation. Of course, saying that on a website or in a book gets you pageviews and sales -- it feeds into the obsession over Yellowstone ... but it makes it that much harder to actually discuss Yellowstone as it should be: as a volcano that happens to have a few large eruptions in its backstory. So, by saying a supervolcano is a clear sign we are headed for a mass extinction is sketchy at best and downright wrong at worst. * It's funny. Just the other day I was saying Annalee and io9 did a great job with this non-sensationalistic post on Yellowstone. I mean, I can't blame her for trying to sell her book, but I'm a scientist, so I protest this new sensational and precariously-balanced argument about supervolcanoes leading us to extinction. ** This doesn't even get into the thorny issue -- if you want to use "supervolcano", then what are the "supervolcanoes" of Earth? What differentiates a "supervolcano" from a normal volcano that produced a giant eruption ("supereruption"?) Just the tip of the iceberg when it comes to this problem, media-created word.