Volcanic Rumbles Mean Magma Might Be Seeping Under Naples 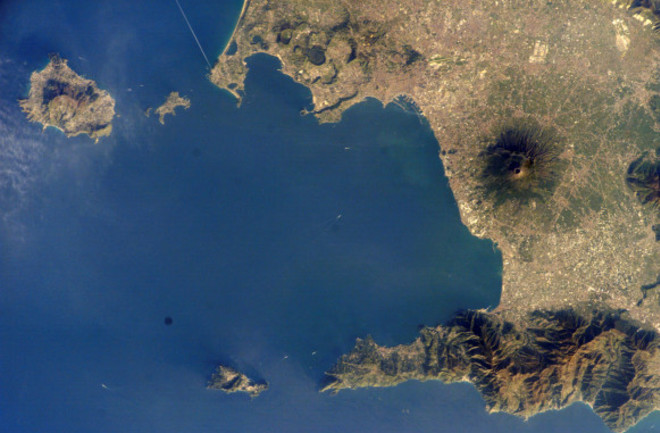 The Bay of Naples in Italy, with the Campi Flegrei caldera in the north (top) and Vesuvius in the east (right).

I've said this before, but if you wanted to pick the most volcanically-hazardous place to live on Earth today, it would be hard to beat Naples in Italy. Vesuvius looms over the city, settled into a rather long period of quiet after centuries of sometimes spectacular (and deadly) eruptions. However, just to the west of Vesuvius is the equally hazardous Campi Flegrei. Unlike Vesuvius, there are no towering mountains, but rather a series of somewhat unassuming cones and craters all nestled within a caldera that spans over 20 kilometers around Pozzuoli. The Campi Flegrei has produced two of the biggest eruptions Europe has seen in the last 50,000 years: the Campanian Ignimbrite (40,000 years ago) and the Neapolitan Yellow Tuff (15,000 years ago), both of which ranked as VEI 6-7 (or something as big as or larger than Krakatau in 1883!) So, sitting underneath over a million people sits the European equivalent to something like Tambora. However, much like its caldera cousin in North America (Yellowstone), the history of eruptions at the Campi Flegrei is more about smaller eruptions of basalt rather than the giant, explosive rhyolites like the Campanian Ignimbrite or Neapolitan Yellow Tuff. The most recent eruption in the caldera was the 1538 eruption of Monte Nuovo ("new mountain"), where a small basaltic eruption built a cinder cone on the western side of the caldera. Since then, most of the restlessness at the Campi Flegrei has been related to the very active hydrothermal system that produces the world-famous Solfatara, with its fumaroles of volcanic gases and hot springs. This doesn't mean that the Campi Flegrei is down for the count by any means. Over the past 40 years, the caldera floor has risen and fallen over 3 meters---sometimes leading to panic and evacuations for fear that another eruption was about to occur ... but nothing has come of it. Some of these periods of unrest can be linked to changes in the water flowing between the hot rocks kilometers below and the surface, but a recent bout of rumbling looks like it might be associated with new magma filling in underneath the Naples area.

Digital Elevation Model of the Campi Flegrei in Italy, showing the location of the 2012-13 uplift (reds, yellows) and earthquakes (open circles).

A study in Scientific Reports by D'Auria and others (2015) looked at deformation of the Earth's surface, as measured by satellites and earthquakes that occurred across 2012-2013 and tried to model what these signals were betraying. During this period, the floor of the caldera rose as much as 3 centimeters in a month, all centered on the eastern shores of Pozzuoli Bay (see map above). The peak inflation showed that the land surface raised by 11 centimeters and with a flurry of accompanying earthquakes. After the uplift and earthquakes ended, the land surface didn't sink back down to its previous position, so whatever happened looks to be a permanent move. D'Auria and others (2015) used a variety of geophysical modeling techniques to determine what would be the best fit to explain this uplift. If the uplift was caused merely by water in the hydrothermal system, you might expect that after the unrest, the land surface would sink back down. It didn't, so magma filling in is a good model. So, they set about trying to determine the depth, shape and volume of magma that could be entering under the caldera. What they found, based on the magnitude and shape of the deformation at the surface is that a small body of magma (likely basalt) intruded at about 3 kilometers depth beneath the city and bay. This magma, like in the shape of a pancake, is only ~0.0042 cubic kilometers (148 million cubic feet---or over 200 times smaller than the 2014-15 eruptions at Holuhraun) and it joined another 0.004 cubic kilometers of basalt that was already present. So, you can infer that ~0.008 cubic kilometers of magma might be present under the area of uplift. Now, does this mean an eruption is about to happen? The answer is clearly "no". Prior to the Monte Nuovo eruption in 1538, there was over 70 years of recorded unrest before the eruption---and it could have been longer, just no one noticed the smaller changes prior to 1468. So, although the Campi Flegrei has been restless now for decades, we likely don't know how long it takes to fill enough eruptible magma into the caldera before a small eruption like Monte Nuovo occurs. It does mean that volcanologists need to keep a very close eye on the Campi Flegrei. If uplift returns and other signs of eruption increase, such as earthquakes or releases of carbon dioxide and sulfur dioxide---and then these signs don't end like the 2012-13 unrest, you could be looking at an eruption coming in the near future. With so many people living in the Naples metro area, the more warning and preparation time planners have, the better. By modeling the unrest in the caldera, we can hopefully begin to discern between changes that might not lead to an eruption (like water circulation, or even the 2012-13 injection of magma) and those that might portend the caldera's awakening.