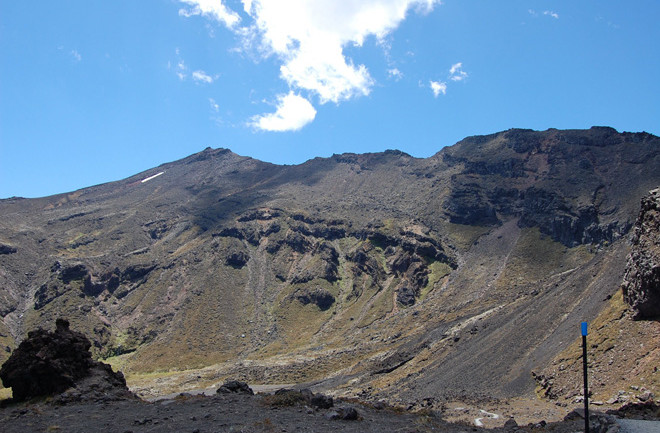 A view of dissected lava flow on Tongariro in New Zealand. Image by Erik Klemetti, January 2009. On Friday, I noted that GNS Science has seen an increase in volcanic seismicity at Tongariro, a volcanic complex on the southern end of the Taupo Volcanic Zone on the North Island. Tongariro itself is made of the older Tongariro proper and the younger Ngauruhoe (famously the model for Mt. Doom in the Lord of the Rings movies). The initial information was that there were over 20 small volcanic earthquakes during a few days in mid-July, much higher than the normal background seismicity. Now it seems that volcanic gas emissions from Tongariro are up as well. The latest GNS Science report says that although Tongariro does consistently release volcanic and hydrothermal gases, volcanic gas emissions are up significantly since the last measurement. Now, these gases are likely carbon dioxide and sulfur dioxide (the typical gases measured for monitoring), which are not hazardous to people in low concentrations (only rarely does CO2 reach levels that can kill in volcanic settings). Even with these increases in volcanic gases, GNS Science has not raised the alert status beyond Level 1 (above typical background). You can keep up with all the real-time monitoring of Tongariro on the GNS Science page for the volcano. {Special thanks to @jo_barnes for pointing out the new GNS Report.}