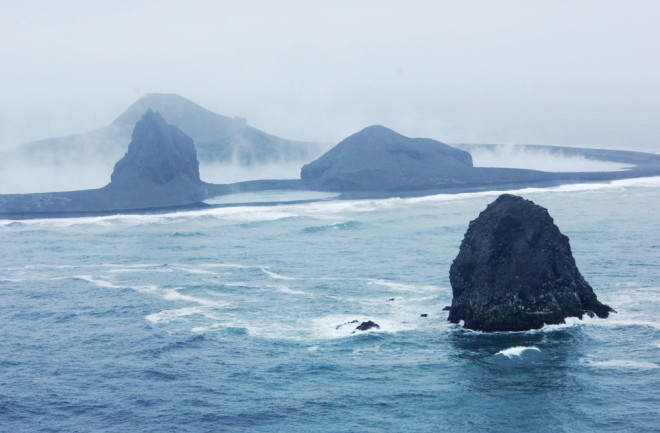 An aerial photograph of Bogoslof and Fire Island taken on May 8, 2017.Max Kaufman/Alaska Volcano Observatory/University of Alaska Fairbanks Let's take a look at some volcanic eruptions going on around the globe this week! In Alaska, after weeks of relative quiet, Bogoslof had another big explosive eruption. This time, the plume reached 11 kilometers (~36,000 feet) after the Alaska Volcano Observatory noticed an increase in earthquakes at the volcano. Ash from this eruption fell on Umnak Island (almost 100 kilometers away) as it drifted to the southwest. The eruption seems to have been brief, with seismicity dropping quickly after the blast, and Bogoslof now sits on the Orange/Watch volcanic alert. Be sure to check out some crazy pictures of Bogoslof Island, with the multiple craters created by the last six months of eruptions. The spire in the images are the remains of older lava on the island. At the same time, Cleveland volcano further west in the Aleutians also experienced a small explosive eruption. This one was much smaller than what was noted at Bogoslof, but it still removed all the lava dome that had been forming at the summit of the volcano since March of this year. This is a very typical pattern at Cleveland, where lava domes grow and are then destroyed by explosions likely caused by pressure building up beneath the lava plug. Over in Italy, Etna continues to be restless, but it has yet to follow up its earliest 11 paroxysms that have occurred since the start of 2017. Dr. Boris Behncke noted that the volcanic tremor at Etna---a sign of magma moving in the volcano---has been rising and falling (see below) but only very small explosions occur from the active vents. It is unclear whether any of this is leading towards a larger eruption with more lava fountains and flows like we saw earlier this year.

... and there's no eleven without twelve, Etna goes on producing those strange mini-eruptive-episodes, photo taken from Catania 15/05/2017 pic.twitter.com/5yAI2EWVs0

on Réunion Island had a very brief eruption

on Thursday. The island volcano in the middle of the Indian Ocean had small lava fountains and lava flows during the eruption that ended only a few hours after it began

. There was a brief seismic swarm before the eruption that allowed some warning that a new eruption was about to begin on the volcano's Dolomieu cone. However, those earthquakes have not stopped. Manam

in Papua New Guinea has also been erupting this week

. Manam is located on a small island off the coast of New Guinea and has been the location of a long-brewing evacuation and resettlement. However, the PNG government has yet to provide the funds

to local residents to move from the volcanically active island to safer locales. Almost 15,000 people will need to be resettled and currently ~25 acres of land have been set aside to help with this transition. However, there has been conflict between the landowners on the mainland and islanders who have tried to move away. This is another example of the issues of long-term volcanic activity and resettlement of people near these volcanoes (much like Sinabung in Indonesia

). A delegation of EU officials arrived this week

as well to help with the transition process.