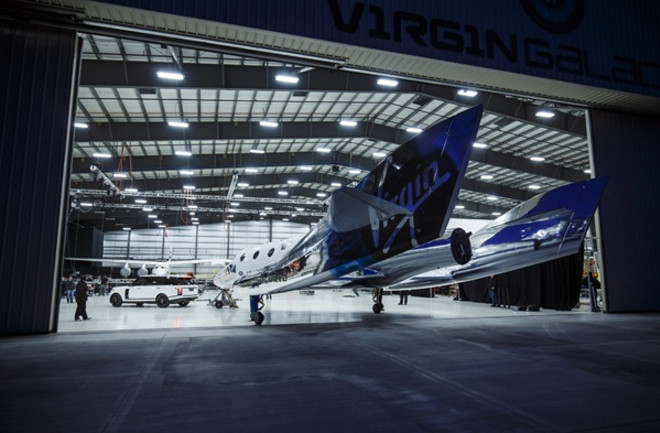 Virgin Galactic's SpaceShip Two, the VSS Unity, is prepared to wow crowds during its 2016 naming ceremony in California. (Credit: Land Rover MENA) Virgin Galactic, one of the companies aiming to become the first to send astronauts into space, is planning to put its SpaceShipTwo vehicle through its next phase of testing starting as early as Thursday, December 13. It will be the fourth powered flight for the vehicle, named VSS Unity, and the first since its successful July 26 flight, which reached a peak altitude of 32 miles (52 kilometers). Now, the company is aiming higher, further, and faster — this next round of tests will “[expand] the envelope for altitude, air speed, loads, and thermal heating. We also plan to burn the rocket motor for durations which will see our pilots and spaceship reach space for the first time,” the company said in a statement on their website. These tests will also evaluate how SpaceShipTwo acts with “the commercial weight distribution in the spaceship represented by our future passengers.” To do so, it will carry four NASA research payloads as part of the agency’s Flight Opportunities Program.

Reaching the Boundary of Space

According to SpaceNews, although the company hasn’t specifically stated the altitude they’re ultimately aiming for, Virgin Galactic officials have in the past said they’re shooting for the 50-mile (80 km) mark, which is the altitude threshold an individual must reach for the United States to award astronaut wings. However, that 50-mile threshold is below the Karman Line, which is currently defined at about 62 miles (100 km) in altitude. The Karman Line signifies the boundary between Earth’s upper atmosphere and outer space. (For comparison, the International Space Station orbits at a height much greater than that: about 250 miles [400 km].) But even that threshold may be changing — in October of this year, a paper in Acta Astronautica suggested revisiting the Karman Line, perhaps moving it (and outer space) closer to Earth by about 12 miles (20 km). If made official, the move would equate Virgin Galactic’s goal with the true edge of space. Regardless of definitions, Virgin Galactic must first get their SpaceShipTwo to that 50-mile line. According to the company’s statement, during this test, SpaceShipTwo’s engine will be turned on for longer than ever before, though it is not planned to burn for its full potential duration. Monitoring during the test of the craft’s speed and altitude will determine how long the engine burns and when it will be shut down. “Whether we complete all our objectives during the next flight or need to wait a little longer, we remain committed to completing the final stages of this extraordinary flight test program as quickly, but more importantly as safely, as possible,” the company’s statement said. [This article originally appeared on Astronomy.com]