Virgin Galactic Has Launched its SpaceShipTwo Into Space 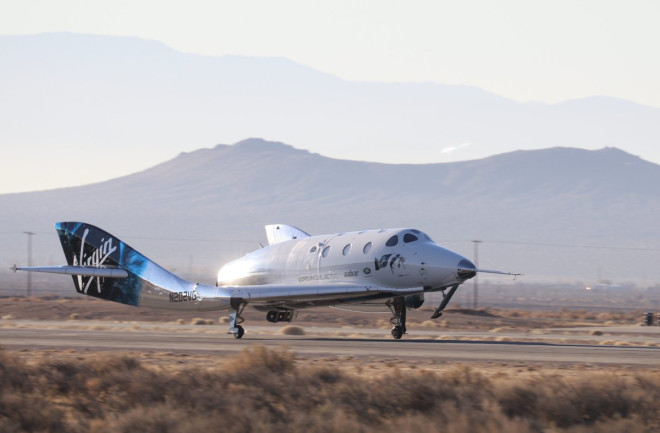 The SpaceShipTwo after flying to space. (Credit: Virgin Galactic)

Virgin Galactic has followed through with their ambitious goal to launch their SpaceShipTwo vehicle into space before Christmas. Today, the aerospace company successfully launched four NASA-supported technologies and two brave test pilots aboard the suborbital space plane into space and then landed safely back on Earth. [embed]https://twitter.com/virgingalactic/status/1073246723114381312[/embed] Today, SpaceShipTwo, named the VSS Unity, launched for space, attached to the WhiteKnightTwo mothership from the Mojave Air and Space Port in California. Aboard were test pilots Mark 'Forger' Stucky and C.J Sturckow . After a bit less than an hour, SpaceShipTwo reached an altitude of 8 miles (13,100 m) and dropped from the WhiteKnightTwo to proceed under its own power. The spaceship proceeded to fire its hybrid rocket motor for about 50 seconds or so, longer than any on any previous test runs. This push helped the vehicle to reach a “space altitude” of 50 miles (about 80 km). That's "space" by the U.S. definition, which awards astronaut wings to anyone who goes above 50 miles. The craft fell a bit shy of space by what is probably the most popular definition, the Kármán line, though. That's where Earth's upper atmosphere ends, and it's about 62 miles, or 100 km, high. In any case, the SpaceShipTwo crew was still able to briefly experience microgravity conditions and observe the curvature of the Earth from their vantage point. After successfully reaching space and then landing back on Earth, SpaceShipTwo is now the first craft to launch humans into space from U.S. soil since NASA's Space Shuttle program ended in 2011. [embed]https://twitter.com/CNN/status/1068496619199287297[/embed]

In previous test flights, SpaceShipTwo flew to a peak altitude of 32 miles (52 km). Since reaching that height, the company claimed that they could go much higher and reach an altitude of 50 miles (about 80 km), according to previous statements by company officials. Most recently, Richard Branson, the 68-year-old billionaire who founded Virgin Galactic, claimed that the company would reach space before Christmas. [embed]https://twitter.com/virgingalactic/status/1073273884831408128[/embed] Today's flight is one step closer to Virgin Galactic's goal of taking paying passengers into space. Based on the success of today's flight, Virgin Galactic has stated that it will move forward with full-duration, or 60-second, motor burns. Virgin Galactic, which is focused on space tourism, aims to use SpaceShipTwo to take paying customers for a short journey to and from space. Tourists who go on this trip will experience four total minutes of microgravity during their short trip to space and back. Branson himself has already stated that he will be the first to ride as a passenger after the craft is fully tested. After that, it appears that the experience will be available to the public — for a hefty price of course.