VIDEO: The Ancient Fortress of Masada As Seen From the Sky 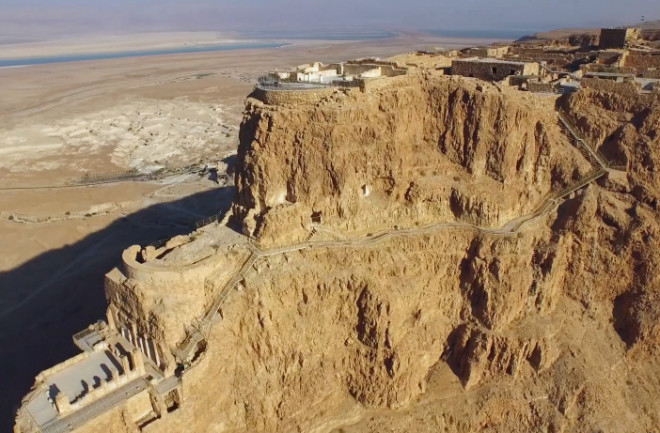 Masada as seen from a drone. (Credit: Screengrab from JP Worthington Media/Vimeo)

The ancient mountaintop fortress called Masada has stood atop an isolated mesa in southeastern Israel for thousands of years.

It stood as an impenetrable fortress build high above the desert landscape. Today, hikers can climb winding footpaths to the top. However, it’s much easier to visit the site via a DJI Inspire 1, like Jeffery Worthington did.

Herod the Great fortified and built palaces at Masada between 37 and 31 BCE as one of his first power moves after taking control of Judea. After Herod’s death in 4 BCE the Romans took Masada, but in 66 CE a Jewish sect known as the Zealots took it back by surprise.

But the Romans weren’t finished. A few years later, an army of 15,000 Romans pushed their siegecraft technology to the max to retake the essentially impenetrable fortress by building a sloping ramp of earth and stones to reach the stronghold. When it was taken, rather than becoming Roman slaves, the Zealots, numbering 1,000 men, women, and children, took their own lives.

Masada briefly served as the site of a Byzantine church through the 5th and 6th centuries, but was abandoned and left vacant until the 20th century. Israeli archaeologists surveyed the site in 1955, and archaeologist Yigael Yadin performed a full excavation, with thousands of volunteers, in 1963. It was designated a UNESCO World Heritage site in 2001, and remains one of the most popular tourist attractions in Israel.

Now, with all that background, savor this opportunity to take it in via aerial view.