Victims’ Families Sue Japan for Failing to Warn of Eruption 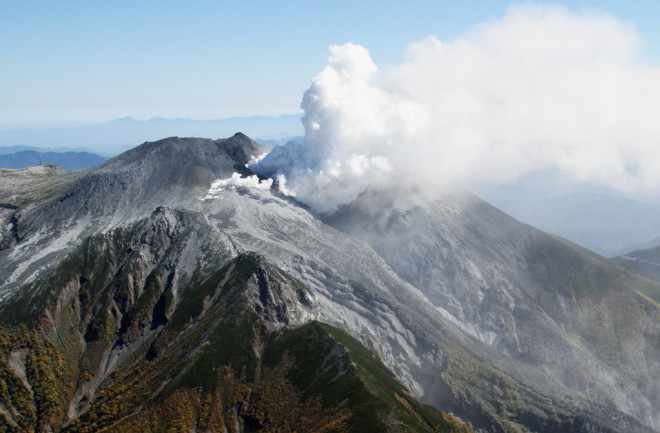 This aerial picture shows smoke rising from Mt. Ontake on September 28, 2014 one day after the volcano erupted in central Japan. JIJI PRESS/AFP/Getty Images Some updates from the world of volcanoes this week: Japan This news isn't about new volcanic activity in Japan but rather the results of one of the most tragic volcanic events in the last few years. In September 2014, Ontake had a surprising phreatic (or phreatomagmatic) explosion. There was little in the way of clear signs that such a blast was going to occur beyond some volcanic earthquakes that started in the week before the eruption. Ontake is a very popular hiking destination, so many people were on the volcano when the eruption occurred and at least 54 people died as a result of the eruption. Now, families of some of the victims are suing the local government over the eruption, claiming that they downplayed the threat posed by the volcano and that it was inadequately monitored (only three of five seismometers were working at the time). This is a little bit like the trial of the Italian geologists after the L'Aquila earthquake, where they were blamed for the deaths due to the earthquakes because they downplayed the risk. The big problem is that geologists monitoring volcanoes or assessing earthquake hazards only have pieces of data from which to work, so making claims without a firm backing can be as bad. If geologists lose credibility because of too many "false positives" about an eruption, then getting people to leave when a real crisis arises can become nearly impossible. The volcanologists from the Japan Meteorological Agency (JMA) worked with the data in hand and determined no apparent threat in Ontake's behavior. This ended up being incorrect, but not really due to misinterpreting the data that was being collected, however imperfect. Alaska Bogoslof (the 2016 Pliny winner) continues to get the most attention across the globe. The Alaska Volcano Observatory released a comparison of the island home of the volcano in 1998 versus January 10 of this year and the changes are quite remarkable (see below). Large chunks of the 1927 and 1992 domes have been destroyed in the eruption, while a new crater has been carved on one side of the island. The volcanic bay created by the current activity is filled with roiling, grey water that is likely dissolved volcanic gases and volcanic debris churning in the water over the active vent. Any sense of green on the island has been replaced with grey from the volcanic tephra that now coats the island.

Changes at Bogoslof between 1998 and 2017. Most of the changes came from the 2016-17 eruptions that blasted a new bay and destroyed some of the domes from previous eruptions.Chris Waythomas/AVO/USGS What you want to imagine during the eruptions is magma erupting just below the sea surface in that new bay. When that magma (which is at over 900ºC) hits the cold seawater, big explosions can occur. Volcanologists studying the plumes from Bogoslof have noticed that it has two plumes: one water-rich and one ash-rich, which can likely be explained by the steam generation from these water-magma interactions. A similar dichotomous plume was seen during the 2011 eruption of Grimsvötn in Iceland, but the steam in that plume was from melting snow and ice on the volcano. The US Coast Guard took a cool image of the eruption (see below) from a distance at night. The red glow is from the lava/ash erupting, while the whiter flash on the left side is likely volcanic lightning generated by the eruption. Lightning detection has been one of the most effective ways that AVO has used to know if an eruption from this remote island is taking place. Considering the lack of monitoring for Bogoslof, even the start date of the eruption is not clear. Although the first big blast happened on December 16, 2016, there are indications from the satellite images taken of the island that activity may have started at least four or five days before the ~10 kilometer (30,000 foot) eruption on 12/16.

U.S. Coast Guard photo of the eruption of Bogoslof on December 23, 2016.US Coast Guard Cutter Alex Haley/USGS/AVO The Aviation Code remains at Orange/Watch, although the rapid changes at Bogoslof mean that elevation to Red/Warning can come as seismicity increased and evidence (such as lightning) suggest an eruption has started. (Special thanks to the discussions on the Volcanic Ash listserv for some of the observations on the Bogoslof eruption.)