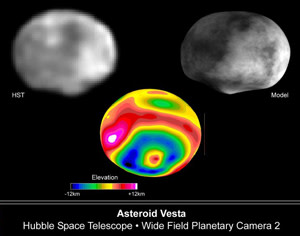 Tonight, the 530 km (320 mile) wide asteroid Vesta is at opposition. That means that it's opposite the Sun in the sky, so it rises when the Sun sets. That makes it easier to observe since you have literally all night to go out. 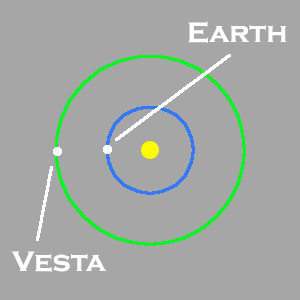 But it also means it's at the point in its orbit when it's closest to Earth. Since it orbits the Sun in the main asteroid belt, about twice the distance of the Earth to the Sun, it's at perigee (closest to Earth) when the Sun, Earth, and Vesta are all in a line. The diagram above I made using my awesome Photoshop skillz should help. Objects that are closer are brighter (and at opposition we're looking straight down the beams of sunlight shining on Vesta's surface, so it's like a full moon effect too), so tonight is just about picture perfect to look for the asteroid. Even better, it's the brightest asteroid in the sky! It'll be shining at about magnitude 6.1 tonight, which is just barely visible to the human eye without aid, though binoculars will help. It's in Leo, not far from the bright star Regulus. Go to Sky and Telescope for a map. And if you happen to spot the tiny world, take a moment and think about this: the NASA mission Dawn will settle into orbit around Vesta next year, in 2011. The image I posted above is from Hubble, and is pretty much the best one we have from here on Earth. In late 2011 we'll have images of it that will be sharp and clear, and, I'm quite sure, jaw-dropping. But until then, go out and take a look for yourself! If not tonight, then sometime in the next week or two. Astronomy is really cool, but what makes it so fantastic, to me, is that you can go out and do it yourself. Go. Image credit: Ben Zellner (Georgia Southern University), Peter Thomas (Cornell University) and NASA