Venus Is Messing With Halley's Comet 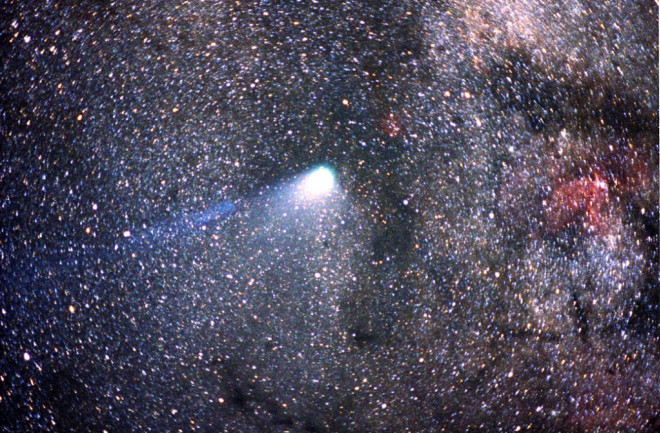 Halley's comet (Credit: NASA) If you're waiting for Halley's comet to show up exactly 75 years after its 1986 appearance, you may be disappointed. The ball of ice has an orbit that varies by months or even years. And new research suggests that Venus is responsible for the comet's variations today, rather than the more massive planet Jupiter. "Comet Halley has been observed throughout history, all the way back to 240 BC by the Chinese," Tjarda Boekholt, an astrophysicist at Leiden Observatory in the Netherlands, told Discover by email.

With many well-documented appearances, scientists quickly realized that the arrival time of the comet was constantly changing. For instance, although it passed Earth in February in 1986, it won't be back until February 2061. In 45 years, it will instead appear in July.

"It is the variation in the time of sightings that provided the first clue to comet Halley's chaotic orbit," Boekholt said. "The orbit of comet Halley is not static, but it is evolving." Boekholt led a team that investigated the comet's changing orbit. They found that Venus played an important role in revising the comet's orbit in the past, and will probably continue to do so in the future, despite its small stature. Mighty Jupiter often dominates the influence of gravitational bodies due to its high mass, but Venus currently dominates Halley’s is movements. The research will be published in the journal The Monthly Notices of the Royal Astronomical Society. A preprint is available online.

According to Don Yeomans, a senior research scientist at the Jet Propulsion Laboratory in California who models comet and asteroid orbits, the small planet's role isn't completely out of line. While the planets more or less line up in a plane, Halley's path around the sun is angled to their orbit, ducking above and below the path near the orbit of Venus. "If Venus happens to be there sometime when Halley crosses the plane, it creates substantial perturbations," says Yeomans. "It sort of gives it a kick and makes tracing the motion forward and backward in time more difficult." Boekholt and colleagues suggested that Venus would continue to dominate the path of the comet for another 3,000 years, until Jupiter takes back over. But Yeomans remained skeptical of looking too far into the future, pointing out that, according to the scientist themselves, the comet's orbit couldn’t be accurately traced longer than 300 years.