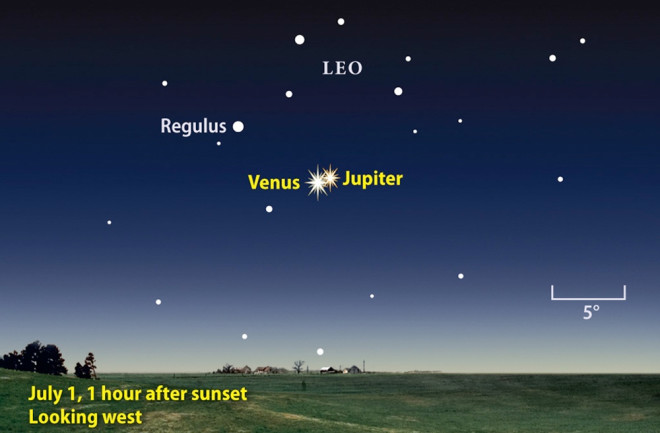 Credit: Roen Kelly/ Astronomy Look to the western sky less than an hour after sunset, and you won’t be able to miss a brilliant point of light more than a fourth of the way above the horizon. That stunning jewel is Venus, and it’s currently having its best showing for northern observers of 2015 as it shines brightest and appears highest in the evening sky.

At the beginning of this two-month “evening star” extravaganza, Venus shines at magnitude –4.4, the brightest point of light in the night sky (only the disk of the Moon is brighter). June 6 marks the planet’s greatest elongation, meaning the world attains its greatest angle away from the Sun as seen from Earth. With an appearance 45° east of our star and some 25° above the horizon an hour after sunset, Venus hasn’t been so prominent in the evening sky since early 2012. The planet has various close encounters with other observing targets during this showing, starting by sliding less than 1° north of the Beehive Cluster (M44) in Cancer on June 12 and 13, which should be a splendid sight through binoculars.

But the celestial object that probably stands out more in Venus’ vicinity is Jupiter. On June 1, the gas giant stood 20° above the inner planet in the western sky, although Venus appeared 10 times brighter. The planetary pair continue to close in on each other throughout June, pulling within 7° on the 19th. The crescent Moon adds to the scene that night. The pinnacle of their joint appearance occurs July 1, when they lie less than 1° apart an hour after sunset. Venus then shines at a brilliant magnitude –4.6 while Jupiter gleams at –1.8, imperceptibly dimmer than a month prior. They both hover 8° to the lower right of 1st-magnitude Regulus, Leo the Lion’s brightest star. If you pull out a telescope that night, you’ll see that both planets happen to appear 32" across. While Jupiter’s disk is fully illuminated, Venus’ is only a 34-percent-lit crescent. Of course, the two planets’ similar sizes in the eyepiece don’t reflect physical reality — Jupiter’s diameter is some 12 times that of Venus, but it also lies 12 times farther away.

After this close encounter, the “evening star” extravaganza culminates as Venus reaches greatest brilliancy July 9. At this point, it sparkles at magnitude –4.7 and appears 4° from Jupiter. In the weeks that follow, the two planets and Regulus create different triangular configurations each night, with a slender crescent Moon joining the scene on the 18th. By the end of the month, twilight starts to grasp the trio from brilliance, and Venus’ stunning show will soon be over.